REVIEW: WOLF IN HER SOUL by N.J WALTERS 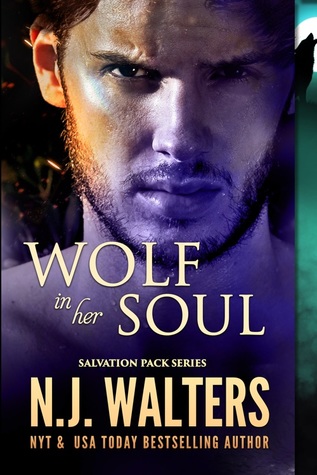 In Wolf in her Soul (Salvation Pack #8) by N.J Walters, for the past decade Detective Reece Gallagher has worked hard protecting the city in order to meet the woman that has haunted his dreams. So, when he goes to talk to an assault victim and finds Hannah Burdette, Reece knows he'll do everything to protect her from the monster stalking her. But when the threat is gone, will Hannah stay or will her trust issues send her running?

Every single book of this series has been a delight to read with this story coming in a close second on my best of the series list. Really, Reece and Hannah's story is absolutely captivating because of everything this couple go through on their journey to happy ever after, especially since it's not easy for the heroine to trust after how she grew up. The way this story started with the prologue had shivers running down my spine, as the man hunting half-breeds is pure evil and needs to be taken down before he kills anyone else. Will Reece and his partner be able to take the bad guy down? However, it was from the moment that Reece and Hannah meet where things get very interesting, as the hero begins acting out of character. Will the hero's partner ever learn the truth about why Reece is so protective of the heroine?

As for the dialogue, it had me totally enthralled due to how intense it was because of the guy hunting Hannah. Would Reece be able to keep her safe? How far is Reece willing to go to see justice served for Hannah? Moreover, both the main characters are well-developed and had me enjoying every time they conversed, as the heroine doesn't make things easy for Reece. How long will it take her to realize that she can trust the hero? Will Hannah ever be able to see past everything her father drummed into her about werewolves and the danger they can bring to her life because she's a half-breed; something full-bred wolves classify as abominations?

While the hero, he's confident, a very good detective that has done his duty to serve and protect for years, and I loved how protective he was of the heroine. I also liked how accepting the pack was of Hannah, because she's never had anyone she can rely on except her father. I also liked that determined Reece was to show Hannah that she didn't have to fight the guy after her alone. That she could rely on him to help drive her stalker away or end him, depending on how far the man wanting to kill her was willing to go.

Overall, Ms. Walters has delivered another exciting and wonderful read for this series where the paranormal elements were superb, the chemistry between this couple was intense; the romance full of exquisite heat and passion; and the ending of this story had me on the edge-of-my-seat because of what happens to the main characters, yet had me cheering for this couple's happy ever after because Hannah is good for Reece and vice-versa. I would recommend Wolf in her Soul by NJ Walters as well as all the books of this series, if you enjoy paranormal romance and books by authors Milly Taiden, Bianca D'Arc, Sasha Summers and Suzanne Wright.

Detective Reece Gallagher has spent the last decade working as a cop in Chicago so he can search for her—the red-haired woman who haunts his dreams. He’s just about ready to give up and go home to Salvation, North Carolina, when he finally finds her. But she’s the assault victim on a case he’s working on, and there’s a full-blooded werewolf who wants her dead. He needs to keep her safe and convince her she’s his mate.

Hannah Burdette has a secret she’s never told anyone. But there is someone who knows who—or rather, what—she is. There’s a stalker after her who plans to rid the world of her “impure” blood. When the cop she meets turns out to be a werewolf and claims she doesn’t have to be alone anymore, she’s wary. But where better to hide from a bloodthirsty hunter than in the middle of North Carolina with the security of a pack surrounding her?