REVIEW: DO NOT OPEN 'TIL CHRISTMAS by SIERRA DONOVAN 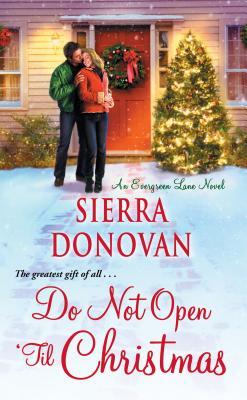 In Do Not Open 'Til Christmas (Evergreen Lane #3) by Sierra Donovan, freelance reporter Chloe Davenport finally has a chance to show how good of a writer she is and hopefully earn herself a full-time position with the Gazette. However, proving herself to Bret Radner -- the man that's been put in charge while the boss is away -- isn't easy. Still, she's determined not to give up, even if it means challenging him on just about everything. Yet, the more time Chloe spends with Bret, the more determined she is to break through his tough exterior and hopefully bring something good back into his life during Christmastime. Will Chloe be able to get through to Bret and show him that Christmas is a time of joy, or will she lose the man she's falling in love with?

This is the first book I've read of this series and I've got to say that this story had everything I love in a romance such as wonderful dialogue that had me loving the banter between the hero and heroine, as Chloe challenges Bret with her smarts and her drive to prove she can be a great journalist; and enjoyable main characters with back stories that just made me keep reading, especially that of the hero, as Christmas isn't a happy time for him. Will he ever be happy at Christmas again? Will the heroine be able to help him overcome the grief he's held on to for years because of what happened around Christmastime?

As for the dialogue, it was intense due to the main characters back stories, but the story did stir plenty of emotion too -- smiling, laughing, a few tears -- as the heroine does her best to prove her worth with the stories she writes, which had an effect on the hero when it came to one particular story and the lose of someone he loved; and does everything in her power to help the hero move forward and give him a reason to see Christmas as something more than a holiday where he's still grieving the lose of someone. Moreover, the heroine is resilient; driven, and passionate about writing, which she hopes to take to another level with what she's doing that she opens up to the hero about. I also liked how the heroine challenged the hero and got him to open up about why Christmas is such a painful time for him and why he's living in a small town instead of working in a big city.

While the hero, he's a talented reporter, a good son to a father that's struggling with his own pain, and I liked how the heroine got under his skin. Since he needed help to finally heal from his loss and not allow Christmas to remind him of such a painful time in his life. Really, the heroine brings joy and I liked that she wasn't afraid to push him a little to open up to her, because he needed to open up to someone. I also liked how loyal the hero was when it came to all he's done for his family, even though it doesn't seem fair at times with all that he's sacrificed.

Overall, Ms. Donovan has penned a fantastic and mesmerizing read in this book where the chemistry between this couple was strong and had me completely hooked because the hero needs Chloe in his life to be able to heal; the romance was lightly-detailed, but still shows off how great these two are together; and the ending had me worried for one of the main characters. Yet, in saying that, I loved how things worked out for the hero and heroine, as he would do anything for the heroine, which is proven by the lengths he goes to for her because he can't lose her. However, it was the epilogue that wrapped this story up perfectly, because Bret is so creative in the way he has such a way with words and I loved the last line. I would recommend Do Not Open 'Til Christmas by Sierra Donovan, if you enjoy Christmas romances, the enemy to lovers trope, or books by authors Sharla Lovelace, Stacy Finz, Samantha Chase and Cynthia Tennent.

What happens when a Scrooge-like boss and a determined young woman have to work together during the holidays? A Christmas of surprises . . .

Bret Radner once dreamed of being a hard-hitting journalist, exposing corruption and writing Pulitzer-winning pieces. But heart-tugging circumstances kept him at the Tall Pine Gazette, where small town life, new neighbors, and human interest stories are the news. In charge for the entire holiday season, Bret is determined to run the newsroom right. Yet with a too-pretty rookie reporter to train, he finds himself challenged on just about everything . . .

A waitress at the Pine 'n' Dine restaurant, freelance reporter Chloe Davenport finally gets her big chance to work full-time for the Gazette. But proving herself to her handsome boss won't be easy. He turns down all her holiday-themed stories and, in fact, doesn't seem to like Christmas at all. Yet the closer Chloe works with Bret, the more she realizes that his tough exterior conceals a hidden hurt . . . and a heart she wants to fill with glad tidings of great joy--for many seasons to come . . .