BLOG TOUR - REVIEW & GIVEAWAY: IT MIGHT BE YOU by JENNIFER GRACEN

Beat the post-Valentine’s Day blues and the cold February nights with Jennifer Gracen’s latest The Harrison’s novel, IT MIGHT BE YOU! 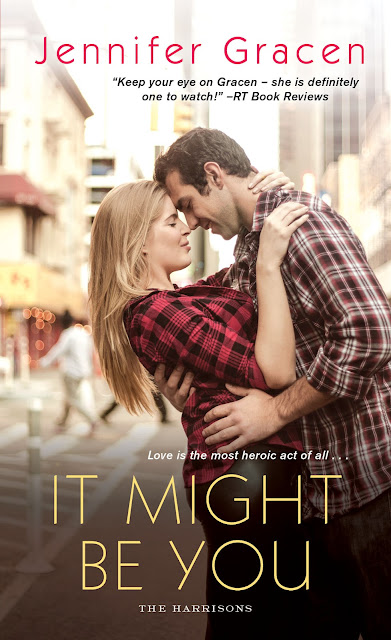 It Might be You
The Harrisons #5
By Jennifer Gracen
Releasing February 27th, 2018
Kensington Publishing

When Officer Nick Martell learns that a sick child needs his help, he flies to the young Harrison boy’s side. But once in the heart of the wealthy Harrison family, Nick faces a shocking truth—he is none other than a Harrison son himself, born of a secret affair. Though the blue-collar bachelor struggles to accept the elite clan as his own, compassion for the vulnerable boy compels him to stay. That, and the deep spark of connection he feels for the child’s beautiful nurse . . .   Amanda Kozlov never felt such a strong and sudden passion for a man before. But falling for Nick is not an option—the life the rugged cop leads is too dangerous, the wounds he carries from his explosive family history too fresh. Yet watching Nick bond with the young boy in her care, experiencing tenderness in his arms, Amanda longs to take a chance on the one man who could save the Harrison heir—the only man with the power to shatter her heart. And as drama swirls around them, only time will tell if they’re brave enough to give their love the future it deserves.

In It Might Be You (The Harrisons #5) by Jennifer Gracen, Nick is determined to help save a little boy's life, but he never imagined his being able to was because he's related to the family as the son of a secret affair. So, when he arrives in New York, it's hard at first to handle the fact that the powerful Harrison family is his own, especially with the suspicious nature of the clan. But as Nick gets to know everyone including his nephew's nurse Amanda Kozlov, Nick starts to wonder whether he can have it all -- love, family and happiness. Will Nick be able to convince Amanda to take a chance on him, or will Amanda's past demons hold her back from achieving their happy ever after?

I have loved this series from the very first book, as each Harrison sibling achieved their happy ever after, and I've got to say that this book does not disappoint. Really, the hero is an absolute delight and goes through so much in this story ranging from the betrayal of someone very important to him to finding love to finding a way to get along with his new family. Will he be able to have a good relationship with his half-siblings? Will he be able to forgive the person that betrayed him? Will he be able to convince Amanda that love is worth fighting for?

The way this story started had me liking the hero immediately and had me sympathizing with him too, as what he learns isn't easy for him to handle. How could something so important be kept from him for so long? Moreover, the dialogue was highly entertaining and definitely full of emotion, as the hero doesn't have the easiest of times when it comes to meeting his new family, but I liked how he handled himself. He wasn't afraid to go head-to-head with his siblings when it came to defending himself because there's nothing more important to him than loyalty and honor. I also liked how kind and caring the hero was when it came to do anything for Myles, the young boy he was hopefully going to help cure of the illness he has. Will everything work out for the best?

While the heroine, it's understandable why she's so adamant about not wanting a relationship, because she lost someone in the past that's made her hesitant to give someone that puts themselves at risk a chance. Will Nick be able to win Amanda over? Furthermore, I liked that she was willing to be there for Nick when he needed someone, because accepting he has another family and finding his way to be a part of it isn't all hearts and roses. Yet, what I liked most of all about the heroine was how good she was at her job and how she handles everything she goes through with Myles and his illness. Certainly, being a nurse to a young boy with cancer wouldn't be easy, but Amanda is definitely a fighter and able to cope when the going gets tough.

Overall, Ms. Gracen has delivered another fantastic read for this series where the chemistry and romance between this couple was delightful and the ending had me cheering fort this couple's happy ever after, as Amanda was willing to fight for their chance at forever after. However, it was the epilogue that wrapped this story and this series up perfectly, as it gives readers the chance to learn how Nick is getting along with his half-siblings in the Harrisons and how both his families get along together. Then again, how could anyone not possibly like the Harrison siblings in Dane, Charles, Tess and Pierce? I would recommend It Might Be You by Jennifer Gracen, if you enjoy the mysterious strangers trope or books by authors Miranda Liasson, Amy Andrews, Sierra Donovan and Stefanie London.

Jennifer Gracen hails from Long Island, New York, where she lives with her two sons. After spending her youth writing in private and singing in public, she now only sings in her car and is immersed in her passion for writing. She loves to write contemporary romance for readers who look for authentic characters and satisfying endings. When she isn’t with her kids, doing freelance proofreading, or chatting on Twitter and Facebook, Jennifer writes. She’s already hard at work on her next book.