REVIEW: COME HOME WITH ME by SUSAN FOX 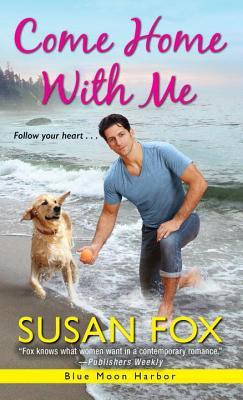 It may be a dot in the Pacific Northwest, but tiny Blue Moon Harbor always has room for love . . .

Miranda Gabriel has finally hit rock-bottom. As a high-school drop-out, she fled Blue Moon Harbor and her shattered family life, and chased after love in all the wrong places. But now, as a single mom, her priority is her two-year-old daughter. Her only choice is to swallow her pride and return to the island she's always hated. At least between working and studying, she'll be too busy for romance--especially when the prospect is a nice guy, exactly the kind she knows she doesn't deserve...


The island veterinarian, Luke Chandler is a widower raising four-year-old twin boys. In high school, he found bad girl Miranda fascinating--and though life has changed them both, he's still intrigued. Luke has known true love, and something about Miranda makes him long to experience it again. Yet he's wary of opening himself, and his boys, to hurt. But his heart may not give him a choice. And together, maybe he and Miranda can give each other the courage to believe in themselves, and to embrace a promising new future . . .

In Come Home with Me (Blue Moon Harbor #2) by Susan Fox, Miranda Gabriel has returned home to Blue Moon Harbor after hitting rock bottom, but she's determined to get her life back on track. Her priority is her two-year-old daughter and doing online classes to earn her degree, yet there's no denying her attraction to Luke Chandler. However, the more time she spends with Luke, the more she finds herself falling for him. Will she be able to get over her insecurities, or will she lose her chance at happy ever after?

The first book of this series features Miranda's brother, and so I was looking forward to getting to know more about the heroine after meeting her in that first book, and I've got to say that I'm so glad she got her own happy ever after. Because she definitely deserves it after everything she's been through with a mother that couldn't clean up her act; grandparents that couldn't care less about their grandchildren; and then falling in love with Mr. Wrong over and over again. Has she finally found her Mr. Right in Luke?

As for the dialogue, it was captivating and fascinating due to the main characters back stories, as Miranda hasn't had the easiest life and it's about time she finally gets her life back on track, even if she does need help from the secondary characters in order to do so. However, it was from the moment the hero and heroine met that had me really enjoying this story, as there's instant chemistry, and certainly, both have reasons to want to keep their relationship as friends for a while. However, in saying that, I liked that they took a chance on each other and overcame one of their toughest obstacles. Will Miranda be able to win over Luke's parents and his in-laws, considering Luke's mom knew what Miranda was like when she was younger? A time when she was a rebel and couldn't help acting out and doing things to prove she was strong, so she wouldn't turn out like her mother to deal with the challenges life threw at her.

While the hero, I really felt for him because his sons never got to know their mother and being a father to twin boys isn't easy. Luckily, he has family that are there for him. Moreover, there was so much to like about Luke in that he's kind, caring and will jump into action whenever someone has an emergency to do with his job. I also liked how determined he was to win over Miranda, even when old insecurities rear their ugly head and have the heroine running scared. Will he be able to prove to Miranda that he loves her no matter what? Will the heroine be able to believe in Luke's love for her?

Overall, Ms. Fox has delivered another wonderful read for this series where the chemistry between this couple was powerful; the romance was charming and made me think that Miranda was one lucky woman to have the attention of Luke; and the ending had me glad these two were willing to fight for their future together, as they've both been through a lot and deserve their chance at happy ever after. I would recommend Come Home with Me by Susan Fox, if you enjoy the opposites attract trope, small town romances, or books by authors Roxanne St. Claire, Catherine Anderson, Jenn McKinlay and Barbara Freethy.