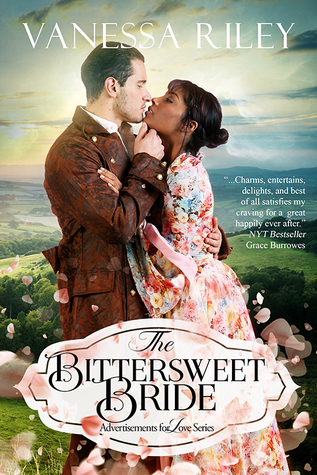 Widow Theodosia Cecil needs a husband to help protect her son. The former flower seller turned estate owner posts an ad in the newspaper, and no one is more surprised than she when her first love, the man she thought dead, reappears.Ewan Fitzwilliam has been at war for six years. Now, the second son of a powerful earl is back but his beloved Theo needs a husband and will not consider him. She believes Ewan left her—in desperate straits—so she denies the feelings she still harbors for the handsome, scarred soldier. Theo and playwright Ewan must overcome bitter lies and vengeful actions that ruined their youthful affair. Theo must reveal her deepest secret in order to reclaim the love that has long been denied.

In The Bittersweet Bride (Advertisements of Love #1) by Vanessa Riley, Theodosia 'Theo' Cecil will do anything to protect her son from those that wish to take him away from her. But the only way she knows she can protect him is to find a man to marry that can stand up for her rights. However, when Ewan Fitzwilliam, a man she thought was dead re-enters her life, Theo finds it hard not to think about the past and how good Ewan made her. Will Theo and Ewan get a second chance at happy ever after, or will the vengeful actions of people they thought they could trust keep them apart again?

What a fascinating read Ms. Riley has delivered in this first story of her Advertisements of Love series where the main characters had me loving their back stories and had me hoping that Theo would give Ewan another chance; the dialogue was riveting, as most of Ewan's family are a piece of work and I could understand why he doesn't want anything to do with them; and the obstacles these two face on their journey to happy ever after had me hoping that Ewan would win Theo over because he still loves her.

Both the main characters were riveting due to their past, their back stories and their growing relationship, as Theo does her best to resist Ewan, but it seems she can't because he's always been 'The One'. Moreover, the heroine is strong and brave in dealing with everything she has including the horribleness of Ewan's family and how they treated her in the past. I also liked how determined she was to do anything she can to protect her son, which is proven by her need to marry someone that can help her. Will Ewan be the man she needs or will she end up marrying someone else? Will Theo be able to protect her son without immediately marrying? Yet, what I liked most of all about the heroine is the tight bond she shares with her son. He's her whole world and there's nothing she won't do to protect him, even if it means sacrificing her own happiness.

While Ewan, he's a wonderful hero and I couldn't help but sympathize with him when it comes to his family. He has a father that doesn't respect him and a mother that will do anything to make sure he doesn't end up with what she belongs is the wrong woman, even though Theo is the woman he loves and wants forever. I also liked the decisions he ended up making because there's nothing more important than love, family and happiness and Theo will always be home for him. Yet, what I liked most of all about the hero was how protective he was of the heroine and how determined he was to right the wrongs he made with the heroine in the past, which is proven by the huge choice he makes towards the end.

Overall, Ms. Riley has delivered a splendid read in this book where the chemistry between this couple was strong; the romance was sweet and heart-warming and showed how these two have never gotten over each other; and the ending left me completely satisfied by what the hero does to show the heroine that she means everything to him. I would recommend The Bittersweet Bride by Vanessa Riley, if you enjoy historical romances, the second chance romance trope, or books by authors Rose Lerner, Alyssa Cole, Beverly Jenkins and Cat Sebastian.