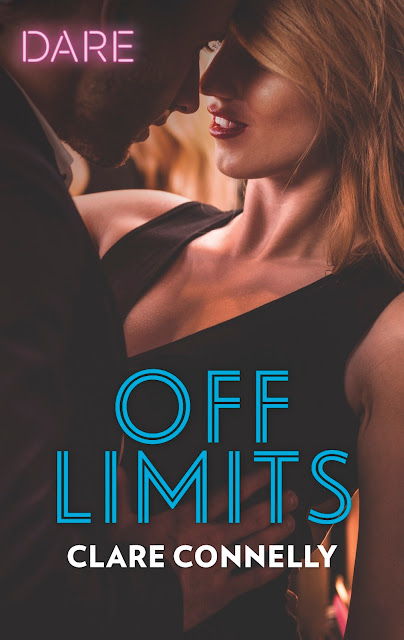 “I want to taste you tonight.”


With chemistry this hot, it’s worth getting burned…


Billionaire Jack Grant is totally off-limits to Gemma Picton. He’s wild, deliciously dangerous…and her boss. When working late turns X-rated, it’s better than her wildest imaginings—and Gemma’s imagined a lot! But Jack has major emotional baggage, so when Gemma starts wanting to heal his heart as well as enjoy his body, she knows she’s in big trouble…!


Available For FREE at:  Harlequin  |  Amazon  |  Barnes and Noble

Copyright © 2018 Off Limits by Clare Connelly

I am holding my breath again. Is that how I’m going to get over this little hurdle? Suffocate myself? Is that even possible? I’m pretty sure we have some breathing trigger in our brains, but my brain is a bit pissy with me so maybe it would conveniently forget about the button.

I push air out consciously, quietly, and he takes his seat.

His smile is a clicker. Is he laughing at me? Arrogant arsehole! That’s be just like him. See? That’s the problem! I know him. I’m not one of his other women. I know that is he as bastardy as he is sexy.

‘How did you sleep?’

I blink at him, my eyes wide. ‘You’ve already asked me that.’

I except a sign that speaks of anger. ‘Like I always do. Seriously, Jack. My desk is covered in paper. I have to get to work.’

He leans forward, and while his face is casual there is an urgency in the flecks of gold that fill his eyes. ‘Did you see him last night?’

I want to remind him of the salient fact I pointed out the night before. It’s not his damned business. But I’m not sure I can say that with such conviction now that I’ve tasted his mouth; now that I’ve been stunned by his desire.

Can I skirt around his question?

‘You’re my work? Okay, the thing is I have the New York guys waiting on contracts, you have a meeting in a week that I have to prepare for and Athens wants your input-which means my input- on a lease agreement. And I need to – ‘

God! Don’t hate me, but when he’s bossy I love it. And he’s almost always bossy.

I glare at him across his desk; it’s best if he doesn’t know that this is just about my favourite version of him.’ 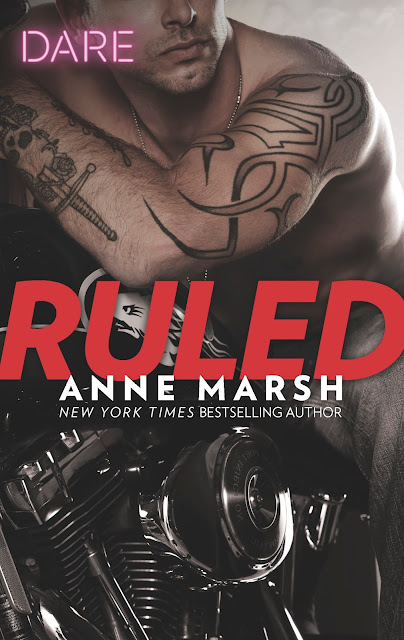 The Rebel vs. The Princess

Jaxon Brady of the Hard Riders MC has sworn to protect Evie Kent from a rival gang. His hard muscles and black leather motorcycle boots are a sharp contrast to the girlie dresses Evie wears for her successful party-planning business. Their instant attraction is magnetic, and their lust keeps them glued to each other’s side…but is it a dangerous distraction?

I have to be more cautious. From the rising volume of the squeals emanating from the backyard, cake consumption has concluded and the party will be wrapping up as the sugar highs hit, the early departers fleeing past my RV parked out front. Spotting the princess in an R-rated embrace with a biker would be bad for my business. You can’t be a dirty girl and host children’s birthday parties for a living. The moms will kill you. Fortunately, the moms aren’t mind readers. I’m only a party-perfect princess on the outside. Riding anywhere with Rev would be career suicide.

My bad voice promptly weighs in. But only if you get caught.

Something flashes across Rev’s face. “You don’t get hurt on my watch. I promise.”

“You’re not an ax murderer?”

He reaches into his pocket and pulls out the wallet attached to his belt by a silver chain. Silently, he flips it open and holds it out so I can read his driver’s license. There’s a military ID underneath it, too, the kind of card that gets you into Nellis Air Force Base.

“Your name isn’t Rev.” According to the State of Nevada’s laminated plastic, he’s one Jaxon Brady.

I examine the license again. He’s also turning thirty-three in four weeks. I bet he won’t be booking a celebratory princess party.

He’s not big on talking. Or negotiating, asking, or sweet-talking. I’ve always trusted my instincts, though, and right now they’re on board with Rev Brady. Completely, totally, 100 percent in favor of getting on this man’s bike and riding off with him. Somewhere. Wherever he wants to go. He’s big and strong and tempting. He’s fought for our country and kept everyone safe.

How bad can he be?

The little voice in my head pipes right up. How bad do you want him to be?

That voice needs a gag.

“Think about it,” he says and then he turns and saunters toward his bike. I stand there, watching his ass the whole way, and wondering why I don’t mind his attitude. He’s scary as shit. He’s not Mr. White Picket Fence and he’s not promising happily ever after, but the man has a fantastic butt and I’m lonely. That’s all it is. I need to get out more, need to make a point of seeing someone.

Anyone else. There are absolutely, positively no bikers anywhere in my future. 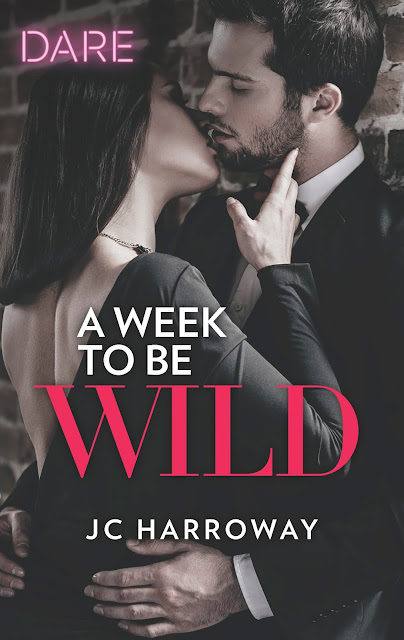 A Week to Be Wild
By JC Harroway
Releasing February 1st, 2018
Harlequin Dare

A daring game of temptation

She’ll play his game—but only by her rules!

Alex Lancaster is an adrenaline junkie. He’s also a sexy British billionaire who should come with his own warning signs. When Libby insists she’s done with men who live on the edge, Alex coaxes her out of her comfort zone—professionally and very, very personally. Libby’s taking a high-stakes gamble, but the payoff could win her everything…

The man occupying her thoughts swept up beside her on a cloud of freshly showered deliciousness, his hand taking a proprietorial hold of the back of her barstool and his smoky, heavy-lidded smile stripping her naked.

‘Hi.’ Libby closed her slack-jawed mouth and swivelled to face him, turning her back on the stranger, never one to pass up a golden opportunity. She hated rudeness, but if Beer Breath was too stubborn or thick-skulled to take the hint...

Alex kept his stare on her, his smile genuine and warm enough to melt her underwear clean off, and then signalled the waiter with a flick of his wrist.

Libby sensed the moment when Beer Breath slinked away, and the hairs on the back of her neck settled—but only temporarily, because Alex hadn’t taken his eyes off her. In fact, he was looking at her as if he was seconds from devouring her whole.

She shivered, delicious tendrils snaking to all her erogenous zones. ‘What are you doing here?’ Libby took a slug of her previously untouched drink, the burn calming her enough to meet his bold stare with one of her own.

‘I came to invite you out for a late supper. I was on my way to Reception and then I spotted you here.’ His hand slid from the back of her stool, and he settled into the one next to her, passing his order to the waiter before returning his disconcerting focus to her.

She stared back, lost for words and missing the proximity of his hand on her chair. He was close enough that his warmth traversed the space between them, but far enough away that she battled her body’s urge to sway closer. And keep on swaying.

‘What?’ One corner of his mouth kicked up. ‘What kind of host would I be if I left you to fend for yourself on your first night in a strange city?’

She couldn’t help the snort that left her. ‘The non-stalker kind...?’

He took the jibe with a cocksure arch of one brow, sipping wine while his poised stare flicked over her face from feature to feature.

Libby flushed hot all over. The ‘stalker’ comment had been beneath her. He hadn’t once touched her, hadn’t bought her drink, hadn’t tried to grab her phone, hadn’t even chased away her unwanted admirer—he had simply given her the out she’d wanted. The rest was all her.

What was wrong with her? Rudeness to a generous host and influential employer? All because he’d awoken needs within her? Needs too long dormant. Needs she’d never had before. Needs threatening to overwhelm her in their intensity. 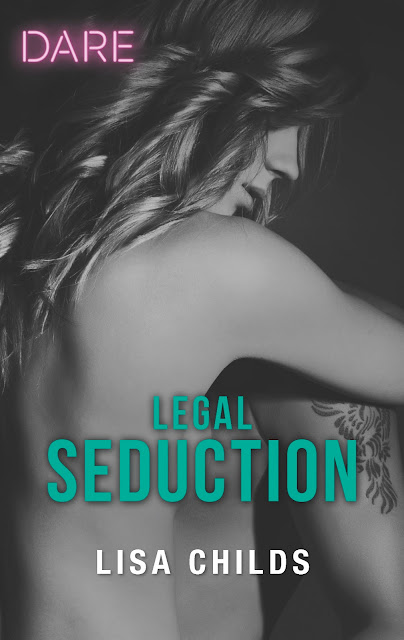 “You are mine for the next two weeks.”

Resigning might be the sexiest thing she’s ever done…

Quitting her job puts executive assistant Bette Monroe in a very compromising position. She has ten days left, and powerhouse lawyer Simon Kramer is working her late into the night…and seducing her into oblivion! While he’s convinced she’s selling business secrets, the bombshell secret she’s keeping would shock him more. Does she bare all…or keep him guessing?

“So then more money will get you to stay,” he said dismissively, as if he’d closed a case. He tossed her crumpled-up resignation letter into the brass trash can sitting beside his desk.
Frustration—and not just with this conversation—overwhelmed her, overcoming her natural inclination to avoid confrontation, and she blurted out, “No!”
Working for him these past two years had increased her frustration because of all those damn fantasies he’d inspired.
“But you just said—”
“I took the job because I needed money,” she said. “I needed money then.”
His eyes narrowed more as he studied her face. “And you don’t need it now?”
“My reason for leaving has nothing to do with money,” she said. Had she not found another source of income, she would have been forced to stay, but he didn’t need to know that.
“So you do have a reason.”
He wasn’t the trial lawyer of their partnership, but he could have been. She felt like she was being cross-examined on the witness stand. And she didn’t enjoy it one bit. Quitting was not a crime.
“I don’t have to give you a reason.” At least she didn’t think she did.
Maybe she should have had a lawyer look at that employment contract before she’d written her resignation letter. But no matter how much she paid, no lawyer would be as good as Simon Kramer. He was the best.
And, according to his ex-lovers, not just at the law...
“Why don’t you want to tell me?” he asked, and he stepped closer now, so close that she could feel the heat of his body through his suit and her cardigan and skirt.
Heat flushed her body, making her skin tingle. She tried to step back but the desk stopped her, the hard wood pressing into the backs of her thighs as he nearly touched the front of her. Her breasts pushed against the front of the gray cardigan as she struggled for breath. She had never been this close to him before. It was more than unsettling. Her knees trembled and her already tripping pulse quickened even more.
“Because it’s personal,” she murmured. And they had never been anything but businesslike with each other, except in her dreams.
He leaned down, so close that his warm breath whispered across her lips as he asked, “Are you in love with me?”