REVIEW: AT THE HEART OF IT by TAWNA FENSKE 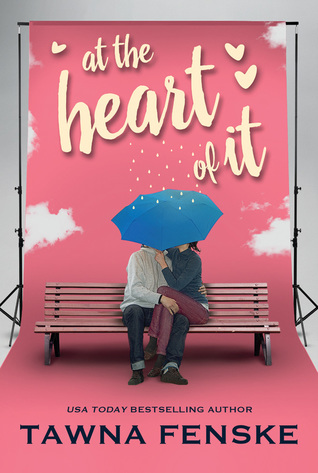 At the Heart of It
By Tawna Fenske
Releasing October 3rd, 2017
Montlake Romance

TV producer Kate Geary is in unscripted heaven. She’s piloting a reality series featuring her favorite self-help guru, Dr. Vivienne Brandt. The Dr. Viv—whose nuggets of wisdom helped Kate get through some of her toughest times. Thanks to Dr. Viv, Kate is almost on the verge of figuring everything out. That is, until Jonah Porter, the superhot book nerd Kate just spent an amazing date with, appears at the show’s first meeting.

Jonah did not want to get reeled into a world filled with invasive crews, pushy network execs, and over-the-top drama, but a connection to the story leaves him no choice. Fortunately, Kate—hot, smart, and funny—helps make it bearable. Now they’re both on the verge of violating their contracts as they find themselves sneaking around off set. But the cameras have a way of finding out everyone’s secrets…especially the ones that can break hearts.

In At the Heart of It by Tawna Fenske, Kate Geary is determined to do a marvellous job on piloting a reality series featuring Dr. Vivienne Brandt, the woman that has been an inspiration to her in getting her life on track and through the tough times she's had over the years. Unfortunately though, things get complicated when she discovers Jonah Porter -- Vivian's ex and the hot guy she'd recently been on a date with -- will be appearing on the show too. Will Kate take a chance on Jonah, or is her career too important to her to risk getting involved with someone part of the show?

What a wonderful and entertaining read Ms. Fenske has delivered in this book where the heroine has a tough time resisting the hero, even though she knows she has to for the sake of the show; the hero was determined to do anything he could to win over the heroine, even if he has to be on the show to do it; the dialogue was a wonderful combination of intense moments, especially since Jonah's ex is the star of Kate's reality show and playful banter that had me enjoying the moments that Kate and Jonah conversed because they're really good together and shouldn't let anything stand in the way of being together. Will Jonah be able to convince Kate to take a chance on him?

Both the main characters were extremely entertaining and I loved how Kate was determined to resist the hero once she realized how much he meant to the woman that helped her through the toughest time in he life. However, in saying that, I liked that she couldn't resist him for too long because there's so much chemistry between them that's hard to ignore. I also liked the heroine's enthusiasm for her job and that she was willing to do anything to make sure things worked out for the best, even if it wasn't doing great things for her personal life. Yet, what I liked most of all about the heroine is that she was brave enough to finally realize what she wanted out of life. While the hero, I could understand his reasons for wanting to turn down the opportunity to star on the reality series, but I'm glad that he took a chance because he needs to let go of the past so he can have any chance at forever with Kate, if he can convince her to take a chance on him.

Overall, Ms. Fenske has delivered a superb read in this book where the main characters entertained me from start to finish with their back stories, their growing relationship and the obstacles they overcome to be together; the chemistry between this pair was strong and had me liking these two together and had me cheering for their happy ever after; and the ending had me enjoying that these two were willing to fight for their forever after and not let anything stand in the way. Not even the fact that they may be in violation of the contracts they've signed for the show. I would recommend At the Heart of It by Tawna Fenske, if you enjoy the opposites attract trope or books by authors Catherine Bybee, Marina Adair, Miranda Liasson and Jamie Beck.