REVIEW: HOW TO ENSNARE A HIGHLANDER by MICHELLE MCLEAN 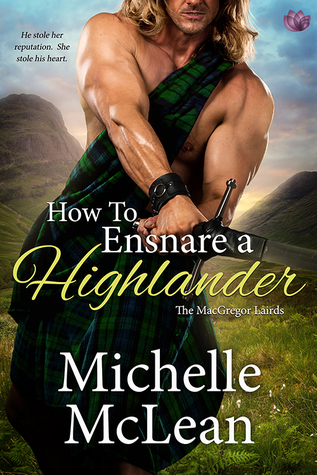 How to Ensnare a Highlander
The MacGregor Lairds #2
By Michelle McLean
Releasing February 12th, 2018
Entangled Publishing

When Lady Elizabet Harding’s family is targeted by the notorious Highland Highwayman, she finds herself wounded and an unwelcome guest of the charming outlaw who’d ruined her reputation earlier that day. Elizabet only wants to get even for her family’s downfall, but the more time she spends with the scoundrel, the more complicated her feelings become.By day, Laird John MacGregor graces the court of Charles II. By night, he exacts revenge on his enemies – one of whom is betrothed to the fiery heiress who has, quite literally, fallen into his arms. The daughter of one enemy and promised to another, Elizabet should be the last person John wants. Yet even as she exasperates him, she is all he has ever desired for himself. When her life is put in danger, he will do anything necessary to protect the women he never expected to love…even if it means they cannot be together.

In How to Ensnare a Highlander (The MacGregor Lairds #2) by Michelle McLean, Lady Elizabet Harding will do anything not to marry the man her father has chosen for her. So when she's wounded and taken after a Highwayman targets her family, she's determined to make the most of it, especially once she discovers the identity of her mysterious Highland Highwayman. But with his enemies closing in, Laird John MacGregor will do everything he can to protect Elizabet. Will he be able to keep her safe, so they have a shot at happy ever after, or will his enemies make sure they're never able to be together?

What an utterly captivating, fast-paced, exciting read Ms. McLean has delivered in this second book of her MacGregor Lairds series where the main characters kept me engaged because of what's going on with Elizabet and whether she'll be able to get out of her betrothal and whether the hero would get his revenge against those that killed his brother. However, it was from the moment the hero and heroine come face-to-face for the first time that had me reading quickly, determined to discover what the hero would do in that moment. Would he fight for Elizabet?

As for the dialogue, it was intense due to the main characters back stories and everything this couple go through on their journey to happy ever after including whether the hero and heroine can overcome their biggest obstacles of all -- the hero's need for revenge and how it will impact her family if he gets it; and the trouble they face that could have dire consequences for the pair. Moreover, I liked how the heroine handled everything she goes through, which is a lot. Really, she's resilient, courageous and I liked how determined she was to find a way out of her engagement, even though it seemed impossible. While John, he's such a memorable hero with his desire for revenge and his determination to protect the heroine, even though it seemed he could only do so much because he believed he couldn't give her what he wanted. I also liked how far the hero was willing to go to get revenge, which is proven by everything he does.

Overall, Ms. McLean has delivered a fantastic read in this book where the chemistry between this pair was strong and had me hoping for the best for this couple; the romance was wonderful; and the ending had me worried for this couple because of the trouble closing in and whether they'll come out on top. However, it was the epilogue that wrapped this story up perfectly, because of what the hero and heroine are willing to risk for their future happiness. I would recommend How to Ensnare a Highlander by Michelle McLean, if you enjoy Historical Romance, the opposites attract trope, or books by authors Stacy Reid, Eliza Knight, Heather McCollum and Jess Michaels.