REVIEW: A SCANDAL BY ANY OTHER NAME by KIMBERLY BELL 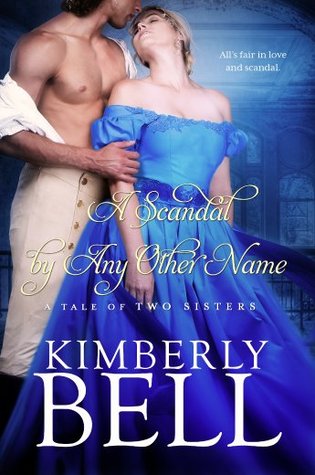 A Scandal by Any Other Name
A Tale of Two Sisters #2
By Kimberly Bell
Releasing January 29th, 2018
Entangled Publishing

Jasper De Vere doesn't do sad. Ever since the death of his parents, he’s devoted himself to life’s many pleasures—while making sure to avoid attachments. It’s difficult to avoid your own grandfather though, especially when you’re the heir to his Dukedom. Unable to sit by and watch one of the few people he cares about wither away, Jasper flees to his friend Nicholas’s country estate.Julia Bishop leads a life of glorious excitement—in her head. The spinal injury she was born with makes her a permanent pariah in society, so despite being the daughter of an earl, she's spent her life in the country with just her family to keep her company. When her brother-in-law’s flirtatious—and devilishly handsome—friend mistakes her for an untroubled debutante, Julia isn’t about to let an opportunity for some real, live adventure slip away.Delicious distraction and flirtation turn into an all-out affair, and slips dangerously close to something more when family intrudes. Can Jasper and Julia return to their separate lives in isolation, or will they take a risk and choose each other?

In A Scandal by Any Other Name (A Tale of Two Sisters #2) by Kimberly Bell, Jasper DeVere isn't ready to become the Heir to a Dukedom, and instead he decides running away to his friend's countryside property is better than accepting the fact that his grandfather is dead. However, it seems he's not going to get the peace and quiet he was expecting with Julia Bishop in residence. Will Julia give Jasper a chance, or will she believe she's not good enough for the man who is to be crowned the next Duke of Albemarle?

The first book of this series was such an incredible read, and this story was just the same in the way this couple have to overcome several really tough obstacles to be together including a family that doesn't approve of their relationship and the fact that the heroine doesn't think happy ever after is in the cards for her because of her medical condition. Will the hero prove to her that he wants her no matter what anyone says? Will the heroine realize that she shouldn't let anything hold her back from love and happiness?

As for the dialogue, it was entertaining due to the main characters back stories, their growing relationship and everything this couple go through on their journey to happy ever after. It is also entertaining, because the heroine is determined to find a way for the hero to give into their intense chemistry. Will Julia get her way? Really, it's quite amusing the way she acts. I also liked how she handles everything that happens when it comes to her illness and her relationship with Nicholas. Is she willing to fight for her chance at happy ever after with him? Will she finally win the approval of those that she needs approval by to be with Jasper?

While the hero, the loss of his grandfather is crippling and he doesn't know whether he'll ever be ready to take over as the Duke, especially when he has so much self-doubt in whether he'll do as good a job as his grandfather did. I also liked how determined the hero was to win the heroine over, especially when they have so much against them with the heroine believing she's not good for the hero in the long run and the hero's family being so against their relationship. Yet, what I liked most of all about the hero was the decisions he made, no matter what the consequences.

Overall, Ms. Bell has delivered another exceptional read for this series where the chemistry between this couple is off-the-charts because of their banter and the emotions of the characters; the romance was special and had me glad this couple achieved their happy ever after; and the ending had me so happy that the hero and heroine were willing to do whatever it takes to be together, even if it meant breaking the rules. Will they get the blessing they need? I would recommend A Scandal by Any Other Name by Kimberly Bell, if you enjoy Historical Romance, the opposites attract trope, or books by authors Stacy Reid, Christi Caldwell, Eva Devon and Jess Michaels.