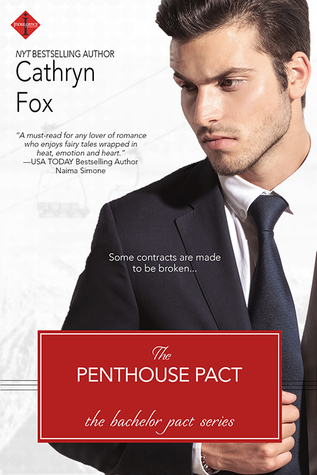 Billionaire software developer Parker Braxton knows everyone wants something from him. That's why he made a multi-million-dollar bachelor pact with his friends to never marry. But he never counted on running into, literally, the quiet but sensual Layla Fallon.Layla isn't afraid of hard work. Still, there is no light at the end of her student-loan tunnel. When Stuck-Up Suit—Parker Braxton—accidentally runs her over, it's the last things she needs. She refuses his help, but he's persistent. He’s also handsome, kinder than she ever expected, and she’s doing her best to ignore her attraction. Which is harder than it sounds when she’s recuperating at his penthouse.Sparks fly. Hearts flutter. But falling for Layla could cost Parker more than just several million dollars.

In The Bachelor Pact (Bachelor Pact #1) by Cathryn Fox, making a deal with his best friends was supposed to keep Parker Braxton safe and never considering marriage, especially since if he loses, it would cost him millions. However, when he accidentally runs over Layla Fallon -- the woman that makes the perfect coffee -- he finds himself inviting her to stay at his apartment while she recuperates from the accident. Yet, the more time he spends with Layla, the more he finds himself doing the one thing he swore he'd never do -- wanting love, family and happiness with the right woman. Will he be able to convince Layla to give him a chance, or will Layla's need to protect herself make her walk away from the love and happiness she deserves?

I am a huge fan of this author, and I've got to say that this is one of the best starts to a series by Ms. Fox yet. Really, the pact Parker and his friends made is an interesting one and was one of the reasons this story was a total page turner for me because I couldn't wait to read more about it. However, in saying that, there were plenty of other reasons this story was so entertaining and that's because of the wonderful main characters that had plenty of electrifying chemistry, but get off to a rough start with what happens to Layla because of Parker.

As for the dialogue, it was intense due to the main characters back stories, as both have lost people they care about and it's tough for Parker to believe the best in people because everybody wants something from him due to him being rich. However, I liked that Parker was honorable and willing to do anything he could to help Layla through the tough times she suffers throughout this book with what happens to her in the beginning and then to keep her living with Parker. I also liked how confident and persuasive the hero could be to get his way because he wants to make certain the heroine is all right. Yet, what I liked most of all about the hero is how protective he was of the heroine, especially when what happened was affecting her personally when it came to her job. While the heroine, she's really independent and hates to have to rely on others, which is understandable because she doesn't trust easily. I also liked how Layla challenged the hero with her stubbornness. Really, she had me smiling at various times throughout this story.

Overall, Ms. Fox has delivered an utterly enthralling read in this book where I'm looking forward to more of this series and where the romance was hot and potent and had me cheering for this couple's happy ever after. The way this story ended had me loving how Parker was willing to fight for their future and I loved the way he went about it. It was sweet and adorable (words that wouldn't make the list) and had me crying happy tears. However, it was the epilogue that wrapped this story up brilliantly, as Layla and Parker are so good together. I would recommend The Penthouse Pact by Cathryn Fox, if you enjoy the opposites attract trope, or books by authors Naima Simone, Kira Archer, Miranda Liasson and Jenna Bayley-Burke.