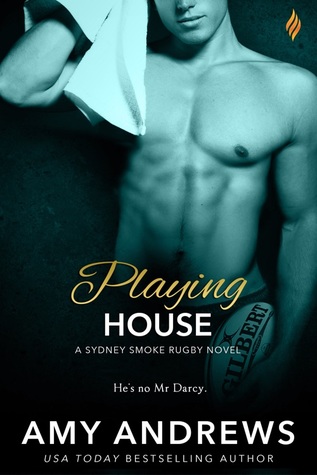 Eleanor is content with her boring life—mostly. She’s even fine being the quirky sister in a bevy of beauties. So imagine her surprise when one of her brother’s Sydney Smoke mates hits on her at an engagement party. Her. The weird sister, who wears vintage dresses and prefers her books to parties. Bodie is shocked the next morning to find the soft, sexy virgin who seduced him with corsets is his best friend’s little sister. If he could kick his own ass, he would. And two months later, she’s got an even bigger surprise for him. Now he needs to convince the corset-loving wallflower that he loves her uniqueness if they’ve got a chance at forever.He always did love a challenge…

In Playing House (Sydney Smoke Rugby #5) by Amy Andrews, Eleanor is ready to finally throw in her V-Card, but having sex with Bodie -- her brother's best friend -- is more than she bargained for, especially when she discovers she's pregnant soon after their one-night together. Bodie is determined to make things work between them by asking her to move in with him. But as they start to get to know each other, will Bodie be able to prove that he wants to make their relationship permanent or will Eleanor walk away to protect herself from getting hurt?

If you've never read any books by Ms. Andrews, I definitely suggest starting with the first book of this series. Really, each book is such a wonderful read and the heroes of the Sydney Smoke Rugby team are endearing and so fantastic that I can't get enough of them. However, with this story containing the brother's best friend trope -- one of the best tropes in my opinion -- I was so looking forward to reading it, and I've got to say that Ms. Andrews does not disappoint.

The way this story started sets the fast-pace of the story and I enjoyed the moment the hero and heroine met for the first time, as the heroine is shy and innocent and meeting Bodie is quite an experience since he's everything she's not in the way he's confident and not afraid to get amongst people and mingle. Furthermore, both the main characters are compelling and I loved the interactions between them, as Eleanor can be herself when she's with Bodie and not feel like her quirkiness is boring to him like it seems to be to others such as her family. I also liked the heroine's resilience in regards to everything she goes through, which isn't easy and brought tears to my eyes in the moment when this couple's relationship goes awry before they find their way back together.

While the hero, he's confident, can be very persuasive when he needs to be, and I liked how determined he was to prove to Eleanor that he can be everything she needs. I also liked how he fought for their relationship when it came to her brother who happens to be his best friend. Things get very tense between them, which is understandable, but I liked that Bodie wasn't about to give up Eleanor because his best friend believes his sister should be off limits to the hero.

Overall, Ms. Andrews has delivered a wonderful read in this book which provided a rollercoaster ride of emotions that I could feel along with the characters; and where the chemistry between this couple was intense; the romance full of heat and passion; and the ending had me loving what Bodie does to win back the heroine and show her that he understands her almost better than anyone. I would recommend Playing House by Amy Andrews, if you enjoy the brother's best friend trope or books by authors Naima Simone, Jami Davenport, Marquita Valentine and Sarina Bowen.