REVIEW: A BABY FOR THE BILLIONAIRE by VICTORIA DAVIES 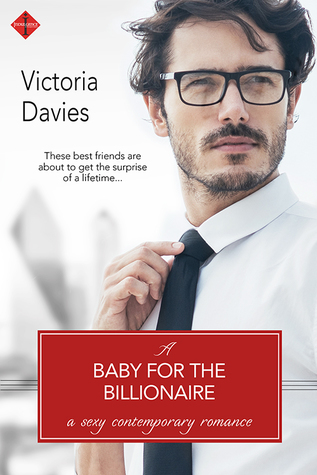 A Baby for the Billionaire
By Victoria Davies
Releasing February 12th, 2018
Entangled Publishing

Walker Beckett is a man ready for anything. He’s a CEO, self-made billionaire, and fazed by nothing. Until a tiny bundle that cries and does…other things he's not equipped to deal with at all shows up on his doorstep. So he calls his best friend, Clara Anderson, who always has the answers. She’s beautiful, smart, and never afraid to put him in his place.Clara’s job has her busier than ever and she really can’t handle one more thing on her plate. Only this particular thing is a baby…Walker's baby. Like always, he needs her. And, like always, she can’t say no to him. This time, though, it isn't a problem they can solve over a bottle of wine.Seeing Walker take on the role of father is doing strange things to her. But she’s not about to risk her friendship—or her heart—especially since Walker doesn’t intend to ever settle down.

In A Baby for the Billionaire by Victoria Davies, Walker Beckett and Clara Anderson have been best friends for years, and there's nothing they won't do for each other. So when Walker finds a baby on his doorstep, the person he turns to for help is Clara since he doesn't know the first thing about babies. Putting a time limit on helping Beckett seems like a good plan, but when time runs out and a spanner is thrown into the works, will Clara walk away to protect herself from getting hurt or will Walker be able to prove how much he needs her in his life before it's too late?

What an absolutely enthralling, fast-paced, incredible read Ms. Davies has delivered in this book where best friends become lovers while caring for the hero's baby; and the dialogue was compelling and had me loving the obstacles these two face on their journey to happy ever after including dealing with the mother of the baby and whether they're willing to take a chance on each other. Really, how have Walker and Clara never given into their intense chemistry before?

As for the dialogue, it was very entertaining and I loved every moment Walker and Clara interacted, as they both believe that giving into their chemistry could wreck their friendship in the long run, and neither are willing to lose the other. However, I liked that they finally gave in and took a chance because there's nothing these two need more than each other. Moreover, the heroine is loyal, has lots of experience when it comes to kids because of how she grew up, and I liked that she was willing to help the hero, even though it wasn't easy to be in such close quarters with him. I also liked the bond she shares with the baby, as she's definitely more of a mother to the little one than the child's mother.

While the hero, he's done well for himself and is known for making mistake after mistake, but being best friends with Clara and changing the status of their friendship has never been one of them. Really, their friendship changing was bound to happen, even though it's taken years for the pair to take the chance. I also liked the bond the hero shared with his baby, and that he was willing to do whatever it takes to make sure the child stayed in his life. Yet, what I liked most of all about the hero was his determination to prove to the heroine that she's the one for him.

Overall, Ms. Davies has delivered a superb read in this book where the chemistry between this couple was powerful; the romance delightful, as the hero and heroine take a chance, even though it could lead to losing each other if things go awry between them; and the ending had me loving the hero, as he's not about to let the heroine make the selfless decision she makes without doing everything he can to prove she's the one for him. However, it was the epilogue that wrapped this story up perfectly, as Clara and Walker have certainly come a long way and are wonderful together. I would recommend A Baby for the Billionaire by Victoria Davies, if you enjoy the friends to lovers trope or books by authors Cathryn Fox, Naima Simone, Kira Archer and Jenna Bayley-Burke.