REVIEW: HIS FOR THE WEEK by ALICE GAINES 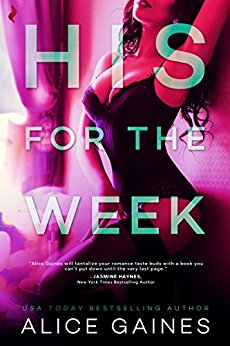 His for the Week
By Alice Gaines
Releasing February 26th, 2018
Entangled Publishing

Sex columnist Désirée “Rae” Knight is in a bind—and not the kind she usually likes. Her newest assignment, and possible big break, is an article for her magazine on the sex resort that just opened. The only problem is it’s couples only. Although she writes about having red-hot sex, she’s been single longer than she’d like to admit. Enter her coffee shop crush, who she’s been secretly ogling every morning. Trouble is, he doesn’t know she exists. When Nate Winslow recognizes the shy, quiet woman at Sufficient Grounds as the author of the sex columns that fuel his fantasies, he’s surprised. And the last thing he expects is an invitation to join her at a sex resort. But his answer is hell yes!Rae and Nate have enough chemistry in the bedroom to set the sheets ablaze. When Rae insists they limit their relationship to sex only, Nate agrees since he’s burned out on love. But the more they push each other’s boundaries, the more they realize one week won’t be enough.

In His for the Week by Alice Gaines, Desiree 'Rae' Knight is finally going to get her big break if she can nail her latest assignment, which is to do a feature on a sex resort that has just opened. However, she needs a partner if she's to ever have a chance of doing the place justice in her article, and who better to ask than the hot guy that comes into Sufficient Grounds, the coffee shop she frequents. Yet, Rae isn't looking for a relationship and is only looking for the pair to be together for a week. But when the week is over, will she be brave enough to take a chance on Nate, or will she walk away from her chance at happy ever after?

The blurb of this book had me really intrigued, and so once I began reading this book I found I couldn't stop because I absolutely loved the hero. He's everything Desiree needs in a man to get over her hang-ups that she's not good enough. Why can't she understand that she doesn't need to take on another persona to land a man and be able to discover and write the things she does as a sex columnist? Will Nate be able to prove to Desiree that she's more than fine as she is?

As for the way this story started, I was amused by the heroine and how she comes face-to-face with the hero, as he's wanting to finally get to know her and what a better way to do that than convince him to help her. Moreover, I liked the banter between Nate and Rae, as the hero pushes her out of her comfort zone because he wants her for her and wants Rae to see that she doesn't need to be a woman that always needs to look her best.

With the main characters, I really liked Nate because he wants Rae for Rae and not Desiree the sex columnist. I also liked how determined the hero was to win over the heroine, even though -- at times -- his attempts prove hopeless. Why won't she give Nate a chance? What happened in her past that makes it so hard for her to trust? While the heroine, she's had it tough and it's understandable why she doesn't trust men after watching her mother pick the worst guys ever. I also liked how hard she's worked to get to where she is in her career and how determined she was to nail the article. Yet, what I liked most of all about the heroine was the tight friendships she shared with some of the secondary characters, especially her friend Carla, as the woman isn't afraid to make Rae face her fears by challenging her to do so. Will Rae listen to her friend's advice and realize that being alone isn't fun when she could have someone like Nate in her life?

Overall, Ms. Gaines has delivered an engaging read in this book where the strong chemistry between this couple spills over onto the pages in super hot and steamy sex scenes; and the ending had me sympathizing with the hero because of how things go awry in his relationship with Rae, but had me liking the heroine's determination to makes things right between them, as she needs Nate in her life just as much as he needs her in his. Then again, how could she not want to continue to sparkle when it comes to her writing? I would recommend His for the Week by Alice Gaines, if you enjoy steamy reads or books by authors Samanthe Beck, Tawna Fenske, Rebecca Brooks and Cathryn Fox.