REVIEW: A HUSBAND BY NEW YEAR'S by SEAN D. YOUNG 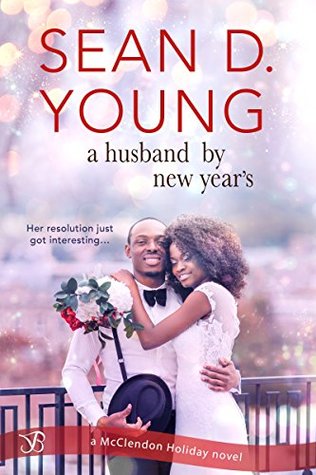 When Renee McClendon was a teenager, she made a list of all the qualities her perfect man would have, but no matter how many handsome guys have ticked the boxes, she has yet to find the man for her. She wants a regular guy who's not afraid to get his hands dirty, and she's given herself a deadline. If she doesn't find Mr. Right by New Year's, she's done searching.

Patrick Dunlap is used to woman looking at him as a lowly chauffeur…until they realize he owns the whole company. All he wants is a woman who'll want him for who is, and not only see dollar signs. He hits it off with Renee right away, so while they get to know each other, he withholds some small details instead of risking what they're starting to build.

But when the truth comes out, how forgiving will Renee be?

Each book in the McClendon Holiday series is a
STANDALONE story that can be enjoyed out of order.


* A McClendon Thanksgiving
* The Christmas Promise
* A Husband by New Year's

In A Husband by New Year's (McClendon Holiday #3) by Sean D. Young, Renee McClendon has a list for her Mr. Right and nothing will stop her from finding a man that possesses her listed qualities. However, if she doesn't find her Mr. Right by her New Years deadline, she's decided to give up on her list. Yet, when chauffeur Patrick Dunlap comes into her life, Renee knows she wants to get to know him better. Will a lie be enough to keep them apart, or will the pair fight for their chance at happy ever after?

The McClendon sisters and the secondary characters of this series are definitely reasons to come back for each book of this series, but it was the hero in this book that really made this story for me. He's everything Renee wants in a man, and yet, there's something he's keeping from her. Something that could blow up in his face, if he doesn't deliver the truth before she discovers it for herself. Will Renee discover the truth before the hero tells her? Will she be able to accept the truth?

As for the way this story started, it drew me into this story immediately and had me sympathizing with the heroine. How could her friends tease her about her list of qualities she wants in a man? Yet, in saying that, I liked that she didn't particularly care what they thought and made the decisions that she does. No way is she going to let anyone convince her that her list is silly. Moreover, the heroine is resilient; hard-working, which is proven by everything she does in her career as a marketing consultant; and I liked that she took a chance on Patrick because he's a good guy. I also liked the tight bond she shares with her siblings, as they would do anything for each other and aren't afraid to offer advice when things become complicated for each other when it comes to relationships.

While the hero, he's been through tough times and I felt sorry for him when it came to his relationship with his brother. Will Patrick get to the truth of what's going on with the family company? Will he find a way to turn things around? Furthermore, the hero is confident, loyal and I liked how determined he was to win the heroine over. Yet, what I liked most of all about these two main characters is the challenges they face in their personal and professional lives that has them needing every single bit of courage and willingness to overcome the problems that arise.

Overall, this author has delivered a riveting read in this book where the chemistry between this couple was intense and had me liking these two together; the romance was on the sweet side; and the ending had me liking the lengths the hero goes to in order to win the heroine back. Luckily, the hero has the secondary characters on his side. I would recommend A Husband by New Year's by Sean D. Young, if you enjoy the opposites attract trope or books by authors Cheris Hodges, Rochelle Alers, Lena Hart and Synithia Williams.