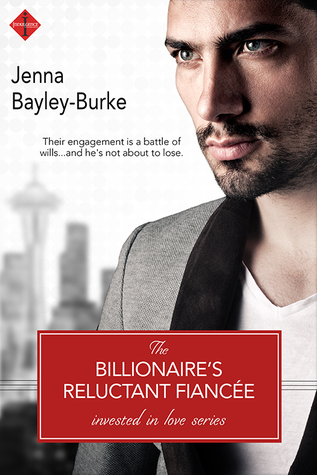 After her father’s untimely death, the only things Lily Harris is left with are debt, scandal, and loneliness—and her late father’s business partner, Jake Tolliver, looking over her shoulder. Lily isn’t interested in being another one of Jake’s many conquests, no matter how attractive he is. But after weeks of frustrations, she’ll consider accepting his help…until he reveals the promise he made her father.Before Jake Tolliver’s friend and mentor died, he asked Jake to take care of his daughter…forever—not that Jake had to be asked. For years, he’s desired Lily Harris, and he has a well-deserved reputation for always getting what he wants.

In The Billionaire's Reluctant Fiancèe (Invested in Love #5) by Jenna Bayley-Burke, losing her father was hard enough, but for Lily Harris resisting her father's business partner, Jake Tolliver, may prove even harder especially since her father asked him to take care of her. However, Lily isn't about to give into him, even though he holds all the cards. Yet, Lily isn't afraid to make a deal with the devil. Will Jake be able to win Lily over, or will Lily fight Jake every step of the way because she doesn't want to be another one of his conquests?

I have loved this series from the very first book, and I've got to say that Jake and Lily are one of the best couples of the series, as Jake is always used to getting what he wants, but Lily doesn't make things easy for him. Really, she's a feisty heroine that grew up sheltered and I liked how determined she was to make her own way instead of taking handouts from a man that promised her father she'd be taken care of. Will Jake be able to handle the heroine's demands, especially when he has some of his own? Will the heroine get what she wants?

As for the dialogue, it was entertaining due to the main characters back stories and everything these two go through on their journey to happy ever after including the heroine's need to prove herself because she won't marry someone for any reason but love; the things the hero does to get the heroine riled up that make her push back; and what happens towards the end that makes the heroine question everything. Moreover, the heroine is resilient and I could understand why she's so resistant to the promise Jake made her father. I also liked how feisty the heroine was and her determination to prove she can take care for herself. While the hero, he's confident, is used to getting what he wants, and I liked how determined he was to win the heroine over, even though it's not easy because he does things he knows will annoy her or make her jealous. Will the things he does make the heroine even more resistant?

Overall, Ms. Burke has delivered a really good read in this book where the chemistry between this couple was intense and only kept getting better the more the heroine resisted the hero; the romance was wonderful and had me liking this couple together once the heroine gave in; and the ending had me enjoying what happens because it makes the heroine face her feelings for the hero. No way can she let him get away without telling him how she really feels. I would recommend The Billionaire's Reluctant Fiancèe by Jenna Bayley-Burke, if you enjoy books by authors Victoria Davies, Miranda Liasson, Cathryn Fox and Kira Archer.