REVIEW: AFTER ALL by ERIN NICHOLAS 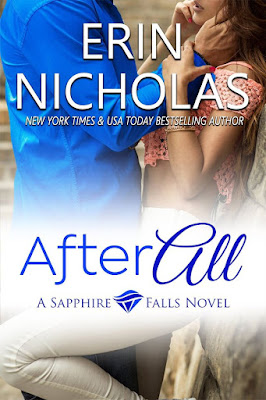 After All
Sapphire Falls: After Hours #1
By: Erin Nicholas
Releasing May 2nd, 2017
EN Fiction, Inc
+ Add to Goodreads

In After All (Sapphire Falls: After Hours #1) by Erin Nicholas, Peyton Wells has strong feelings for Scott Hansen. But what he's asking for, she doesn't believe she can give him, because she doesn't do relationships. Yet, when Scott is injured on the job, Peyton is determined to help nurse him back to full health. However, the more time she spends in close quarters with Scott, the more she finds herself wanting what he wants - a relationship. Will Peyton give Scott a chance to prove happy ever after isn't a bad thing?

What a fantastic read Ms. Nicholas has penned in this story, which pulled me in from the very beginning and had me hooked until the very end. Seriously, I read this book in one sitting and loved every minute of it, despite it taking me a while to warm up to the heroine. However, once her back story started to come to light, she totally won me over. Since I could understand why she is the way she is in terms of not wanting a relationship, because she doesn't want any relationship she's in to be one like her parents have.

The way this story started had me liking Scott immediately, as the moment reveals how close he and his friends are and how they're not afraid to tell him things they know he's not going to like. How will Scott react? Will desperate times call for desperate measures? What will he do when he confronts Peyton after hearing what his friends have told him? His reaction was quite amusing in the moment where the hero and heroine first come face-to-face in this story, and the dialogue at various times had me smiling or laughing too. The whole sex-no-strings-attached attitude from Peyton versus Scott's need for a relationship makes for interesting reading, as Peyton is determined to succeed until she realizes what she really wants. That being in a relationship with Scott wouldn't be so bad, because they already have a friendship that is as tight, if not tighter than some relationships. He's always there for her, and she's willing to do the same, which is proven when they end up role reversing with Scott determined to seduce and Peyton showing the hero that she's ready for a relationship.

Both the main characters charmed me with their back stories and the decisions they have to make. Peyton is sassy, a challenge for Scott, loves small town life and loves to make everyone around her happy. So much so that I liked how it ends up helping her realize what she wants to do in terms of expanding on her career by combining two things she really likes. While Scott, he's kind, caring, protective and I liked how he's always there for Peyton, because she's never had someone be there for her like he is.

Overall, Ms. Nicholas has penned a wonderful read in this story where the chemistry was off-the-charts and spilled over onto the pages in scorching sex scenes that will no doubt leave female readers thinking Peyton is one lucky woman to have the attention of such a delectable hero in Scott. The way this story ended had me smiling, because of the surprise Peyton has for Scott. She is so creative. I would recommend After All by Erin Nicholas, if you enjoy the friends to lovers trope or books authors Melanie Shawn, Samantha Chase, Kylie Gilmore or Jennifer Bernard.

BLURB
Big, hot Sapphire Falls cop Scott Hansen, the source of Peyton Wells’ dirtiest daydreams, has only one fault in her opinion…he’s crazy about her.

She’ll do absolutely anything Scott asks if he obeys three simple rules: they’re both naked; there are lots of hands and lips involved; and they absolutely do not call it a relationship. The R word gives her hives. Why can’t the guy just be happy with no-strings sex?

But, when Scott’s injured on the job, Peyton can’t stand the idea of anyone but her playing nurse—and Scott sees the perfect opportunity to show her that a relationship with him can be the best time she’s ever had.

But things with Peyton are never easy. After all, he doesn’t call her Trouble for nothing…
BUY LINK:  Amazon
at 22:56