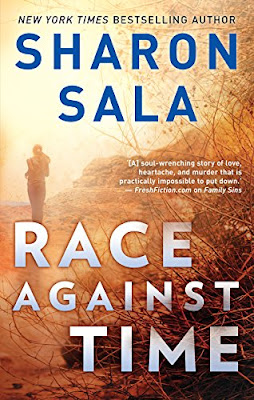 In Race Against Time by Sharon Sala, Quinn O'Meara finds it hard to trust people after experiencing tough times while growing up in the foster system. However, the moment she comes upon a fiery car crash, and finds a crying baby, she's determined to get the baby to safety. Except she never imagined she'd find herself hunted by a bad man involved in human trafficking. Luckily, her long-lost friend, Detective Nick Saldano, is determined to protect her at all costs. Will Nick be able to win Quinn over, so they can have a second chance at happy ever after?

What a wild ride Ms. Sala takes readers on this story, which encompasses several characters points-of-view in both the good guys and the bad guys, the second chance romance trope, plot twists that will leave readers determined to discover what else happens and a prologue that will have readers hooked from the very beginning. The way this story started had me feeling sorry for the victims of the human trafficking ring, as the treatment was rough and horrible. How can people be so cruel?

As for the dialogue, it was powerful, emotional and takes readers on a thrilling journey into the devastation human trafficking rings create for loved ones of kidnapped victims, the hope that a family will be reunited with said loved ones, how far the bad guys are willing to go to escape capture and what the cops are willing to do to protect witnesses and take down the bad guys. Moreover, the dialogue was also intense due to the main characters back stories, especially that of the heroine. She had it rough growing up, and I could understand why she finds it hard to trust people. Although, Nick is completely different, because of the tight bond they shared years ago. I also liked how strong and brave she was, as it shows she's a fighter who has managed to survive all she's suffered during her time in the foster system.

While Nick, I loved him. He's strong, smart, protective and I liked how determined he was to win the heroine over to make her realize that she doesn't have to keep running from her past. I also liked the tight bond he shared with his relatives, as it showed he had a good life; a life filled with love and laughter after he and the heroine were separated when they were younger. Luckily, there's a lot of love to go around and that Nick's family was so accepting of Quinn.

Overall, Ms. Sala has penned a really good read in this romantic suspense where the chemistry was strong and palpable and revealed how right these two are for each other. The way this story ended had me on the edge-of-my-seat due to the danger the main characters face. Will they get the head bad guy that is determined to rob Quinn of her life? Will Nick be able to protect Quinn? Moreover, I liked how Quinn handles herself, as it proves she's determined to see justice served. However, it was the epilogue that wrapped everything up nicely, as we discover how far Nick and Quinn have come in their relationship and what happened to the bad guy. I would recommend Race Against Time by Sharon Sala, if you enjoy romantic suspense, second chance romances, the sexy protector trope or books by authors Alison Brennan, Karen Rose, Melinda Leigh or Pamela Clare.

BLURB
Sometimes fate brings you together...only to tear you apart
Growing up in the foster system, Quinn O'Meara made a point of never getting involved. But when she discovers a crying baby amid a fiery crime scene, she knows she has no choice. Suddenly in way over her head, Quinn turns to the police, unintentionally positioning herself in the crosshairs of a deadly human-trafficking ring.

The last time homicide detective Nick Saldano saw Quinn, she was still the young girl he'd shared a foster home with. The girl who'd loved and cared for him when no one else had. Now here she was, gorgeously all grown-up--and in terrible danger.

Unwilling to lose her again, Nick insists on keeping Quinn close, especially when the bond they once shared heatedly slides into desire. Quinn finally has someone worth holding on to, but what kind of future can they have when she might not live to see tomorrow?
BUY LINK:  Amazon
at 18:00