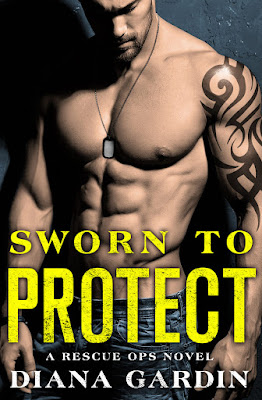 In Sworn to Protect (Rescue Ops #1) by Diana Gardin, Rayne Alexander doesn't know who she can trust when she uncovers information that could possibly get her killed, so she returns to her hometown in hopes of staying under the radar from those that may want to hurt her. However, when she starts her new job, she finds herself reunited with the man she once loved, Jeremy Teague. Can she trust him with her secrets, or will the secrets she's keeping have the same effect they did years ago and destroy their second chance at love?

Ms. Gardin has penned a heartfelt, passionate and thrilling read in this first book of her Rescue Ops series, which hooked me from the very beginning with what the heroine is going through. Will she escape the danger and manage to uncover the information she needs to get the bad guy arrested? However, it was from the moment the heroine came face-to-face with the hero for the first time in years that made this book really intriguing and a total page turner for me. What went wrong with their relationship in the past when they still feel so much for each other?

As for the dialogue, it was told from different points-of-view -- Jeremy, Rayne and the bad guy -- and I loved every moment of it, because it was a wonderful mixture of intense, emotional and playful banter between Jeremy and Rayne as well as between the main and secondary characters. Jeremy's teammates are very accepting of Rayne and I liked how far they were willing to go to help him keep Rayne safe. I also liked the growing bond between Jeremy and his son as he got to know the incredible child that he missed out on knowing for so many years, because of the interference of those that should have cared more about Rayne and Jeremy.

Both the main characters entertained me from start to finish due to their back stories, the history between them and their growing relationship. Will they get their second shot at happiness, or will their happiness be ripped away from them again by the greediness and jealousy of someone that should have one of the main characters best interests at heart. Furthermore, the heroine is strong and brave by what she's done in raising her son without much support and how she copes with what is happening to her now. I also liked that she put her trust in Jeremy to help her against the person after her and also opened up to him about what happened to make her leave him years ago when they were so in love. Certainly, Rayne's willingness to open up made sure that past mistakes wouldn't be made again and that those that wanted them kept apart wouldn't win.

While Jeremy, he's been through a lot and I'm glad that he didn't turn away from Rayne because of how things ended between them in the past. That he gave her the chance to explain why she left and the reasons for him being unable to discover her whereabouts. I also liked how protective and courageous Jeremy was and his willingness to break the rules if things went awry in his planning of keeping Rayne and his son safe. Will he win against the bad guys, especially when he learns just how far someone was willing to go to keep he and Rayne apart?

Overall, Ms. Gardin delivered a wonderful read in this book where the sex scenes were filled with plenty of heat and passion and illustrated that nothing would keep Jeremy and Rayne from achieving their second shot at forever love. The way this story ended had me concerned for the main characters due to the decisions they'd have to make, because they couldn't afford to make the wrong ones. Not with so much at stake. However, it was the epilogue that wrapped this story up perfectly, as we discover how far Rayne and Jeremy have come on their journey to a second chance. I would recommend Sworn to Protect by Diana Gardin, if you enjoy romantic suspense, second chance romances or books by authors Paige Tyler, Cat Johnson, Maya Banks or Elle James.

BLURB
To keep her safe, he'll have to uncover all her secrets.
Rayne Alexander. A face I never thought I'd see again, and one I never could forget. Nine years ago, she left town--and me--without a backward glance. But now she's back, with a haunted look in her eyes and a feisty attitude that didn't exist when we were teenagers. Seeing this grown-up--and sexy--Rayne is something I wasn't prepared for... and it's bringing up feelings I'd thought I'd buried years ago.


Although I want to demand answers from Rayne, working on black ops at Night Eagle Security has taught me that it's sometimes better to keep my mouth shut. So when I catch her hiding a photo of a little boy, I'm curious. When I see her jump as her phone rings, I'm concerned. But the second I notice a car following her home, I know she's hiding something. Something dangerous. And while I may not know why she left or why she's back, if there's someone out there Rayne is afraid of, I'll make damn sure that threat is eliminated.


The Rescue Ops series:
Sworn to Protect
Promise to Defend
Mine to Save