REVIEW: BEYOND REASON by KAT MARTIN 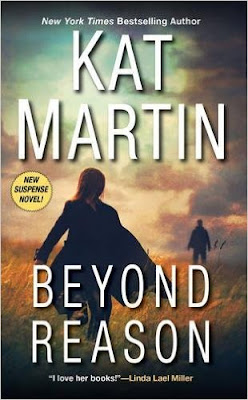 In Beyond Reason (Texas Trilogy #1) by Kat Martin, Carly Drake is determined to turn the future of Drake Trucking around. But with the murder of a driver and the death of her grandfather, Carly is struggling to make ends meet. Even worse, she's being targeted by a bad guy that wants to use her company for nefarious purposes. Luckily, she finds an ally in Lincoln Cain; a man that was asked by her grandfather to take care of her. Will Lincoln be able to keep her safe, or will the bad guys win and destroy the couple's chance at happy ever after?

Ms. Martin pens a great romantic suspense in every story of this genre I've read by her, and this story opens her new Texas Trilogy brilliantly with its perfect blend of suspense and romance, two intricate main characters that had me so wrapped up in the story that I was finished way faster than I thought I'd be, and an array of bad guys that had my spine tingling with the tiniest amount of fear and worry for the hero and heroine. As the two main bad guys were more dangerous than Lincoln and Carly could have ever imagined. Could the hero and heroine stay one step ahead of the bad guys?

The dialogue was well-written, full of intensity and kept me on the edge-of-my-seat every time the bad guys did their best to scare Carly. Would Lincoln be able to keep her safe, especially with the team of men he has on his side determined to help him investigate who was behind trying to get Carly to fall in line with their plans? However, it isn't easy for Lincoln to win the heroine over. Seriously, she's way too stubborn for her own good in the beginning, but as the story progresses and things become more dangerous for Carly, I liked that she finally started to begin to trust that together she and Logan could make things right and stop the bad guys from succeeding in their plans. Yet, what I liked most of all about the heroine is that she doesn't back down from anything, just because things get tough. She's determined to do what's right for her grandfather's company and that means sticking with things, no matter how dangerous the trouble she faces is.

While Logan, he's been through a lot in his life and it's understandable why he doesn't trust the police of the town. He's had trouble with the law before, and I liked that he's willing to go head-to-head with the sheriff -- a man that doesn't like him -- for Carly. I also liked that he's willing to do whatever it takes to keep the heroine safe and ensure he kept the promise he made to her grandfather, even if it means putting his own life on the line. But what I liked most about the hero is how he's managed to turn his life around from being a troublemaker in his teen years to a complete success that has business meetings with people that Carly couldn't believe he was having meetings with.

Overall, Ms. Martin has penned a superb romantic suspense in this book, which was full of twists and turns that kept taking me by surprise, especially the one with the bad guys being more dangerous than what any of the main or secondary characters could have imagined. The way this story ended had me concerned for the main characters and a certain secondary character that ends up having his life threatened because of his connection to Carly. However, I liked how everything worked out in the end and the epilogue wrapped this story up wonderfully, because of a letter the main characters received. It's shows that someone was looking out for Carly and Lincoln's future. I would recommend Beyond Reason by Kat Martin, if you enjoy romantic suspense or books by authors Jennifer Ryan, Maya Banks or Kaylea Cross.

BLURB
Five weeks ago Carly Drake stood at her grandfather’s grave. Now she’s burying Drake Trucking’s top driver, and the cops have no leads on the hijacking or murder. Faced with bankruptcy, phone threats and the fear of failure, Carly has to team up with the last man she wants to owe—Lincoln Cain.

Cain is magnetic, powerful, controlling—and hiding more than one secret. He promised Carly’s granddad he’d protect her. The old man took a chance on him when he was nothing but a kid with a record, and now he’s the multi-millionaire owner of a rival firm.

But Linc’s money can’t protect Carly from the men who’ll do anything to shut her down, or the secrets behind Drake Trucking. If she won’t sell out, the only way to keep her safe is to keep her close . . . and fight like hell.
BUY LINK:  Amazon
at 16:40