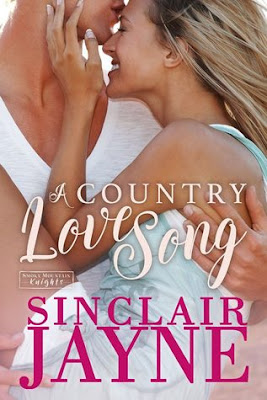 In A Country Love Song (Smoky Mountain Knights #1) by Sinclair Jayne, Sutter Knight has decided after years of staying away from Sweet Tea, Tennessee, that it's about time she returned now that she's made it big as a country music star. However, when she learns the local historic theater is about to be torn down, Sutter decides she'll do whatever it takes to convince her ex, Dawson, to deviate from his plan of turning the theater into a hotel. But soon she realizes it's going to take more than a trip down memory lane and their still strong chemistry to win him over. Will she be able to achieve what seems the impossible and hopefully win back the man she still loves, so they have a second chance at forever after?

What an enchanting and fast-paced story Ms. Jayne has penned in this book, which had me hooked from the very beginning with how the heroine reacts to what's happening in her hometown. She's devastated as she has such great memories of the theater, because she's so musically talented and it's a place that helped her build her confidence and taught her to be more appreciative of what she's accomplished. Since if it wasn't for the old theater and showing the town how talented she is, no way would someone have pushed her to reach for more and encourage her to leave town to pursue her dreams.

As for the dialogue, it was hard not to be affected by the emotional roller coaster this hero and heroine take readers on, as their growing relationship illustrates that love doesn't die, no matter how long they've been apart for. However, I could understand the hero's need to protect himself by keeping his distance from Sutter, because he knows that once she gets her way she'll leave town again. Since there's no way that she won't, especially after all she's achieved in her career.

Furthermore, I loved the hero. He's done well for himself in all that he's achieved. How can Sutter be so determined to stand in the way of all the good that he's trying to do for Sweet Tea? Why is Sutter so determined for the pair to take a walk down memory lane -- so to speak -- and remind him of all the good times they had? In some ways, I thought it was a tad selfish of the heroine the way she uses their past when she was the one to leave him ten years ago. Yet, at the same time, she's trying to do what's right for the people of Sweet Tea, especially the children. They need music in their lives like she had in hers. While the heroine, she's strong, brave and I liked how determined she was to make sure the theater lived to see another day, because it's an important structure in the town, and still has a lot of offer. Also, I liked that the heroine was willing to get the secondary characters involved in her cause, as her sister is a pit-bull when it comes to going after what she wants.

Overall, Ms. Jayne has delivered a fantastic read in this book where the intense chemistry between this couple entertained me from the moment they came face-to-face for the first time in this story to the very end. Will they get their second shot at happy ever after? Will Dawson be able to forgive the person that interfered in their past relationship to make sure both he and Sutter ended up where they have in their lives? The way this story ended had me cheering for this couple's happy ever after, as no one deserved it more than these two. They needed to go their separate ways to achieve what they have, but I'm glad that they found their way back to each other. Because they're a couple meant to be, no matter the obstacles they face on their journey to happy ever after. I would recommend A Country Love Song by Sinclair Jayne, if you enjoy second chance romances, small town romances or books by authors Melissa Foster, Cora Seton or Bella Andre.

BLURB
After ten years playing coffee shops, singer and songwriter Sutter Knight has finally cracked the top ten on the country music charts and is winding down her first tour. To celebrate and reconnect with her Smoky Mountain roots, she heads home to Sweet Tea, Tennessee only to discover the historic theater where her love of music was born is about to be torn down. Worse, her high school sweetheart who used to perform with her is spearheading the project. More disturbing–his deep blue eyes and smile still have the power to kick up her heart rate and make her forget her own name.

After college, architect and contractor Dawson Yates returned home for family and to build his business and reputation. What better way to achieve his goals than to transform a damaged and dangerous community eyesore into a hotel that will bring jobs to Sweet Tea? Dawson doesn’t expect to meet strong and charming resistance from the woman he loved and hasn’t forgotten. Sutter might be vowing to stop the demolition and put his project at risk, but soon, Dawson’s more worried about losing his heart again.