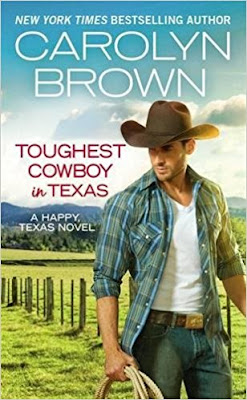 In Toughest Cowboy in Texas (Happy, Texas #1) by Carolyn Brown, Lila Harris and Brody Dawson were once very close, but he let her down and she moved away. Now years later, she's back in town for as long as it takes to sell her mom's café and the chemistry still sizzles as hot between them as it did back in high school. Will Brody be able to convince Lila to give him a second chance?

I've had a few of my book friends recommend this author's books to me, so what better way to be introduced to Ms. Brown's writing than with the first book of a new series for her. From start to finish, this story was entertaining and I really liked the way it started. Brody never thought he'd see Lila again, but he's happy she's in town because he's really missed her. Seriously, I could feel every emotion along with the characters, and it's palpable the hero hasn't forgotten her. However, it's also palpable that Lila is wary of Brody in the beginning. He hurt her badly in the past and her sassiness towards him in the moment they come face-to-face for the first time in the story is a defense mechanism; a way for her to keep her distance until she can decide whether she can trust him again.

Both the main characters were completely captivating, and I loved how Brody wins Lila over, even though she's reluctant to give in to being with him because she's not going to stick around Happy. Lila is strong, brave and I liked how determined she is to confront the past and prove that she's no longer the wild child she was branded as in the past. Even though she may seem reckless to some because of her mode of transport and some things she does that if she's caught could get her in trouble. Moreover, I liked that Lila fights for her chance with Brody and isn't intimidated by his mom and grandma; two women that would rather not see Brody with Lila. While Brody, I liked how tight he and his family are and how they support each other, especially since his sister lost the love of her life and she has three kids to care for. I also liked that he wasn't willing to give up on getting a second chance with Lila, because they're a couple that are meant to be, and they shouldn't let anything stop them from being together.

Overall, I really enjoyed this story where there was plenty of chemistry between the main characters that had me hooked to discover how things would turn out for these two. Would they get their second chance? Would Lila move back to Happy or would Brody go to wherever Lila ended up? The way this story ended was delightful, as Lila makes a decision that's right for her and I'm glad that she made the decision she did. No way would she have been happy if she hadn't made such a decision. I would recommend Toughest Cowboy in Texas by Carolyn Brown, if you enjoy the second chance romance trope or books buy authors Kari Lynn Dell, Jennifer Ryan, Lori Wilde or Kate Pearce.

BLURB
The Spark of an Old Flame

Brody hasn't had much time lately for anything other than ranching. Running the biggest spread in the county and taking care of his family more than keeps him busy. All that responsibility has him longing for the carefree days of high school-and Lila. She may have grown up, but he still sees that spark of mischief in her eyes. Now he's dreaming about late-night skinny dipping and wondering how he can possibly resist the one woman he can never forget...
BUY LINK:  Amazon