REVIEW: NOT THROUGH LOVING YOU by PATRICIA PRESTON 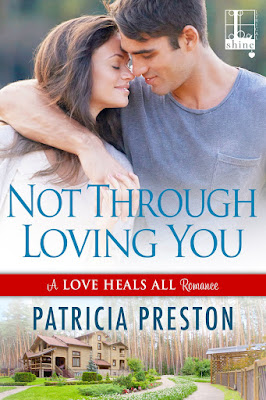 Not Through Loving You
Love Heals All #3
By: Patricia Preston
Releasing June 20th, 2017
Lyrical Shine
+ Add to Goodreads

In Not Through Loving You (Love Heals All #3) by Patricia Preston, Lia Montgomery knew she had a half-sister, but never got to know her like a sister should. But when she learns about Candace's death and that her sister had recently delivered a baby, Lia is determined to do what's right by her nephew. However, she never imagined she'd fall for the man that's looking to adopt her sister's baby, and if she's not careful, her falling for pediatrician Aaron Kendall could lose her everything she's worked so hard for. Yet, when love is on the line, how can she possibly turn her back on Aaron?

What an engrossing, fast-paced, wonderful read Ms. Preston has penned in this story, encompassing the enemy to lovers trope with Aaron wanting to adopt the baby and Lia determined to make sure her half-sister's baby goes to a home she feels will give the baby the love it deserves. Is Aaron the right choice to Lia? What will happen if she believes he isn't? How far is the hero willing to go to prove he is the right person to adopt her nephew? The way this story started proved to be a bit of an eye-opener, as Aaron's family go a tad wild with the bachelor party his father is hosting. However, it was from the moment that Lia and Aaron met that had me flipping the pages quickly, determined to know how Lia would react to the situation, because what's going on at the bachelor party is something Lia believes is unsuitable for someone wanting to adopt a baby.

As for the dialogue, I was hooked by both the main characters back stories, as what Lia is doing by making sure her nephew has a good future could lose her everything she's work hard for. Since she's living a lie; a lie that she knows she can no longer keep secret, and yet, if it comes to light she's afraid it could break the bond she shares with her father. Although, at times, it seemed the man cared more about her career than her as a person. However, I'm glad that her father proved me wrong in a critical moment where Lia needed him more than ever. Even if his advice wasn't something she could consider paying attention to because she'd fallen in love with her nephew.

While the hero, I absolutely loved him. Lia coming into his life and disrupting it isn't going to stop him from adopting the baby, no matter how much of a fuss she puts up and I liked that he proved her assumptions about him wrong. He is the best choice for the baby, not only because he's a doctor and has been there for the little one since the moment he was born, but because he's kind and caring and would do whatever it takes to make sure the baby is well cared for and happy. Certainly, he goes to desperate lengths to prove to Lia he can be a good father to the baby, which is proven by the fact that he listens to his brother's advice for winning the heroine over.

Overall, Ms. Preston has delivered a marvelous enemy to lovers story in this book where Aaron and Lia have plenty of chemistry and where the story weaved the promise of love, family and happiness for the main characters, if they can overcome the challenges they face. Can Aaron understand why Lia has to expose the lie she's been living alone to those it'll have an effect on such as her father, so they can have a shot at happy ever after? Will Lia respect the ultimatum the hero gives her, or will she fight for their love? The way this story ended was delightful, as it illustrates love is worth fighting for. And besides, what a better way for the heroine to win Aaron back than to use her musical talent. Since, of course, her song was a beautiful array of words that reveal just how much the title of this story plays for the ending. I would recommend Not Through Loving You by Patricia Preston, if you enjoy the enemy to lovers trope, a story where the secondary characters will definitely tempt a reader to check out the previous books of this series as well as future books of it, or if you enjoy books by authors Tracy Brogan, Lisa Mondello or Victoria Pinder.

When a sickly infant is surrendered at the Lafayette Falls Medical Center, and orphaned soon after, pediatrician Aaron Kendall arranges to adopt him. After a painful divorce, the busy baby doc is about to realize his own dream of becoming a father when the baby’s beautiful estranged aunt turns up. She doesn't exactly approve of the Kendall bachelor pad complete with Aaron's cranky dad and wacky brother, forcing Aaron to form a risky alliance with her.

Country singer-songwriter Lia Montgomery barely knew her half-sister, but she's determined her tiny nephew goes to a good home. If only she fit the bill herself, but her stressful life on the road is no place for a baby. Yet despite her misgivings, as she gets to know Aaron, she realizes the smart and sexy doctor is everything a child could want in a dad and more unsettling, everything she's ever hoped for in a man. After all she's put him through, is it too late to form a family and maybe put a song in the good doctor's heart?
BUY LINK:  Amazon
at 21:45