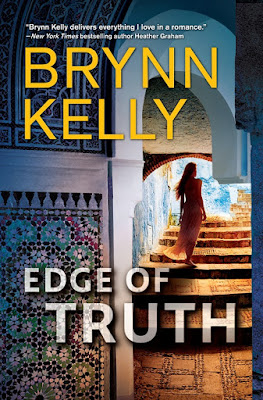 Edge of Truth
By: Brynn Kelly
Releasing May 30th, 2017
Harlequin
+ Add to Goodreads

In Edge of Truth by Brynn Kelly, Journalist Tess Newell never thought she'd escape her imprisonment by a terrorist group that want to make certain she never gets the story she's been investigating on air. But when French Foreign Legionnaire, Flynn, is tossed into her cell, they find themselves working together to break free. Knowing he's her only chance at staying alive, Tess knows she's going to have to trust him, even if he is keeping secrets that could be dangerous if anyone learned the truth. Will they trust each other in order to survive, or will Tess decide that flying solo is the best way to achieve her goal of making sure the public hear her story?

From the moment I finished Deception Island, Ms. Kelly's debut novel, I was really looking forward to her next release, and I've got to say this book does not disappoint. It's an extremely scintillating read that wrapped me up in its spell, which blended a perfect combination of suspense and romance that gripped my attention from the very beginning and held it to the very end. Seriously, this story was one I could not put down. The way this story started had me sympathizing with the heroine's situation, as it's one that wouldn't have been easy. What will happen to her? Will the terrorists follow through on their plans for her?

As for the dialogue, it was intense due to the main characters back stories, what the hero and heroine go through and what the heroine is determined to reveal to the world about the terrorist group holding her. Will she be able to get her message out to the world? How far will the terrorists go to stop her? However, the dialogue wasn't all intense. There was some playful dialogue between the hero and heroine as well as the hero and the secondary characters -- his brothers in arms -- that broke up the intensity of the story and gave me hope that everything would work out for the heroine. That she would no longer have to fear reprisal from the terrorists, if she managed to air her story.

Both the main characters are fantastic, and I loved every moment they were on the run and trying to stay one step ahead of the terrorists. Their journey takes them on an action-packed and wild ride that had me on the edge-of-my-seat at various times throughout. Most especially when things get dangerous enough that I didn't think it possible for Flynn and Tess to escape. However, Tess and Flynn are resourceful and I liked how they could think quick when they needed to find a solution to their troubles.  Furthermore, Tess is strong, brave and altruistic. She already blames herself for deaths she wasn't responsible for and she doesn't want any more on her conscience, especially not that of Flynn and his team if anything happened to them. I also liked how determined she was to get her story aired, and that she would go to any length to achieve her goal, even if it meant tricking Flynn so that he was safe. While Flynn, I couldn't help but feel sorry for him when it came to his back story. He does the job he does for redemption and I could understand why, because he never once said a word to help those that were helpless and didn't stand a chance of stopping the person he should have without voicing a truth he didn't want to face. I also liked how protective he was of the heroine, and that he wouldn't allow her to go it alone like she wanted.

Overall, Ms. Kelly has penned an absolutely riveting read in this book where the romance was realistic, intense and completely satisfying, because if anyone deserves to be happy it's these two after what they've been through in the past and what they go through within this story. The way this story ended definitely had me worried for this couple, as they have a serious fight on their hands to stay alive. Will something bad happen to one or both of them? Will anything happen to the other people the terrorist group are threatening? However, I really enjoyed how things worked out between Flynn and Tess and how much he helped her, as she definitely needed his help and his willingness to sacrifice himself the way he does. I would recommend Edge of Truth by Brynn Kelly, if you enjoy romantic suspense, the sexy protector trope or books by authors Heather Graham, Laura Griffin, Cynthia Eden or Brenda Novak.

BLURB
Tensions sizzle in this electrifying novel guaranteed to capture your heart and take your breath away. Fans of Julie Garwood, Suzanne Brockmann and Jayne Ann Krentz will devour this action-packed, emotionally stunning tour de force, where every page reveals another damning secret and daring gamble.

Rotting in an African dungeon is the last place journalist Tess Newell expected to find herself. As she's held hostage by the terrorist group she's investigating, Tess's salvation--and temptation--arrives in the form of another prisoner. A French Foreign Legionnaire with a sinful smile and too many secrets to be anything but dangerous. Yet she knows he's her only hope of surviving.

The Legion is the only family Flynn has. His sanctuary and his purgatory, after years spent in hell. When a mission goes south and Flynn is captured, it's not the enemy that worries him, but the brazen, alluring reporter whose prying questions threaten to bring down his world--and the walls he's built around his heart.

Yet after a daring escape, Flynn must risk it all and go on the run with Tess to retrieve the evidence she needs. The chemistry between them threatens to detonate but, with the enemy fast closing in, time is running out to unravel the truth from the lies in this deadly conspiracy...
BUY LINK:  Amazon