REVIEW: IT'S ME AGAIN, BABY by KATIE REUS 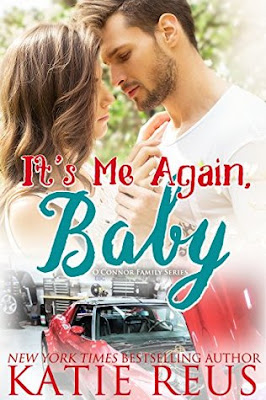 In It's Me Again, Baby (O'Connor Family #3) by Katie Reus, years ago Samantha Murphy allowed another woman to cause her to break off her relationship with Maguire O'Connor, all because she didn't trust in his feelings for her. But this time, when Maguire comes face-to-face with Samantha again due to some meddling by his family, he is going to do whatever it takes to win Samantha's heart and make certain that their relationship is one that will last forever. Except Samantha is keeping a secret and when it comes to light, will Maguire be able to keep her safe from a stalker, or will their chance at happy ever after be stolen from them?

I prefer the Deadly Ops and Red Stone Security series by Ms. Reus, but considering this is the first book I've read of the O'Connor Family series, I found it was an enjoyable read where the pages flew by quickly. Not only because it was a novella, but because this story is a second chance romance and the characters were interesting due to their past history and what caused Samantha to break things off with Maguire. The way this story started had me sympathizing with the main characters, as neither are expecting to see the other when they do. It's a tad awkward at first, and it's understandable why Maguire acts the way he does towards her at the start. How could Samantha have thought he would ever be capable of what another woman told her when it was palpable that his feelings ran strong in the past?

As for the dialogue, it flowed really well and made it hard not to like Maguire from the start. He's the kind of man that when he wants something, he isn't afraid to go after it, and what he wants is Samantha. I also liked the tight bond he has with his family, and how he and his sister tease each other. Every single one of his family are nosy when it comes to his growing relationship with the heroine, and I loved the reason why once I read it. Who would win? While the heroine, she's been through a lot and moving home to be closer to her mom was the best option for her. I also liked that she wasn't afraid to admit how insecure she was during their past relationship. That definitely took courage, and was understandable because of their age difference. An age difference that was probably a big deal back when they were together, but not so much now. Samantha is no longer the naïve, insecure girl she used to be. However, what I liked most about the heroine was that she wasn't going to back down on making her own decisions once it's revealed she has a stalker. She had a job to do; a job she's very successful at and nothing or no-one is going to keep her away from doing it.

Overall, Ms. Reus has penned a really good read where the chemistry and sex scenes were sizzling and illustrated these two couldn't get enough of each other. Besides, they have a few years to make up for. The way this story ended felt a little anticlimactic because of what happens with Samantha's stalker, yet I'm glad these two achieved their happy ever after. However, it was the epilogue that wrapped this story up nicely with the surprise Maguire has for the heroine. I would recommend It's Me Again, Baby by Katie Reus; if you enjoy the second chance romance trope or books by authors Jennifer Ryan, Melissa Foster, Bella Andre or Nora Roberts.

BLURB
She lost him once…

Years ago Samantha made a mistake and lost a chance at something real with Maguire O’Connor. Now that she’s living in Holly again, she knows seeing him is inevitable. But the last thing she ever expected was to take him on as a client.

Now they have a second chance…

Maguire never got over Sam. Thanks to a meddling family member, he mistakenly hires Sam as his real estate agent. With her in his sights again, he’s not letting her go. But someone from her past followed her back to Holly with a sinister intent. Now Maguire will do whatever it takes to protect the woman he intends to claim as his forever.
BUY LINK:  Amazon