REVIEW: THE FAVOR by BLAIRE EDENS 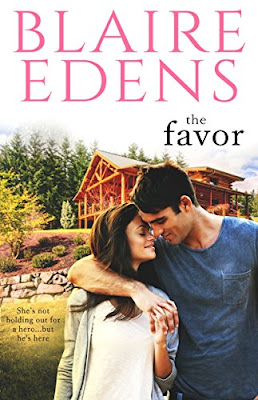 The Favor
By: Blaire Edens
Releasing May 22nd, 2017
Entangled Publishing
+ Add to Goodreads

In The Favor by Blaire Edens, after the disaster her marriage turned out to be, Anna Bishop believes she's better off alone. Yet, she'll do anything to make her little boy's life happier, which means accepting help from her best friend's brother, Clark, who comes to her young boy's birthday party dressed as a superhero. However, coming through for her son isn't the only problem Clark solves for her when he proposes they get married to make sure her ex-husband doesn't get full custody of their son. Will Clark be able to break through Anna's walls to show her that not all men are like her ex, or will her need for independence after her disastrous marriage send her running from the one person that can make her completely happy again?
This is the first book I've read by Ms. Edens, and I absolutely enjoyed it due to the main characters, the bond between the hero and the heroine's son, the dialogue because the heroine is stubborn and isn't ready to put her trust in another man after her ex and the way this ended that illustrates love is worth fighting for, especially when someone's words help the characters realize it. The way this story started had me sympathizing with the heroine, because her ex-husband is a complete jerk that loves to lord his power over her and the fact that he has money and the means to take her son away from her. However, it was from the moment where the hero entered the story where things became very interesting, as he stands up for the heroine while creating a major problem for her when it comes to the custody battle for her son. Why couldn't Clark realize that what he does will get them both in trouble?

Both the main characters were really good, and I could understand why the heroine feels the way she does about relationships. Her ex did a real number on her, and she craves her independence to make certain that she can take care of herself and her son without needing another man in her life to take care of her. I also liked how good of a mom she is and that she would do anything for her son, even if it means having to marry Clark to secure her son's future. While Clark, he hasn't had it easy and believes he doesn't deserve love, family and happiness in his life after what happened to his best friend. He blames himself, which is understandable and had me feeling sorry for the hero, because there was nothing he could have done to save his friend from being as hurt as he was. Nor can he take away his friend's suffering. However, what I liked most about the hero is how he proved to the heroine she could trust him with everything he does for her and her son; a young boy that he ends up forming a special bond with.

Overall, this book was a delightful read where the dialogue was easy to follow and had me smiling at times, the chemistry was entertaining and the ending left me believing the heroine was lucky to have found a guy as great as Clark. However, it was the epilogue that wrapped this story up brilliantly with how it links back to the beginning of the story and how it reveals how far Anna and Clark have come in regards to love, family, happiness. I would recommend The Favor by Blaire Edens, if you enjoy the sister's best friend trope or books by authors Rachel Harris, Victoria James, Sonya Weiss and  Coleen Kwan.

BLURB
Single mom Anna Bishop doesn’t want help from anyone, but she does need a superhero for the birthday party she’s has planned for her seven-year-old. Luckily, her best friend’s brother agrees to suit up and play the role.
When architect Clark Wainwright agrees to do his sister a favor, he never expects to end up in a pair of tights...not to mention the tight spot he ends up in when he creates trouble for his sister’s best friend. Clark is a fixer, and he’ll do whatever it takes to fix the problem he causes for Anna and help her keep her son...whatever it takes...even of it means proposing.
Anna could do with a little rescuing...but it just might be Clark who gets saved in the end.
BUY LINKS:  Amazon | B&N | iTunes | Kobo
at 23:30