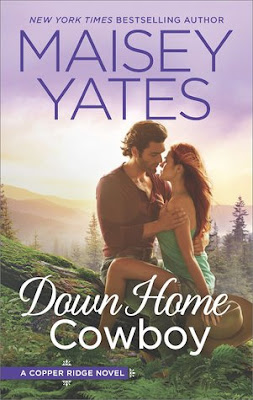 In Down Home Cowboy (Copper #8) by Maisey Yates, Cain Donnelly has moved back to Copper Ridge with his daughter for a fresh start after his wife left them. However, he's finding it very hard to get along with his daughter when she resents him for making the move away from her friends and everything familiar. Determined to re-connect with Violet, he asks her new boss, Alison Davis for help. Will they together uncover what's going on with his daughter and hopefully have their own chance at a happy ending?

This is the first book I've read by Ms. Yates, even though I've had book friends recommend this author's books to me time and time again. Right from the beginning, this story was entertaining, fast-paced and I liked how this story began. Cain and his brothers were estranged before he moved to Oregon, and yet, it seems they're determined to stick together through the good times and the bad and I liked how Cain's brothers tease him and are determined to get him back to the dating world or at least to find a woman to have a good time with. Will he listen to his brothers and go for it?

The dialogue was compelling, and I was captivated by the main characters back stories. Alison had it tough during her marriage, and it's understandable why she fights so hard for her independence and doesn't want to give another man a chance. However, in saying that, I liked how Cain won her over by showing her how different he is to her ex. I also liked how determined she was in the moment where she asked Cain for what she wanted, because she hasn't been intimate with a man in years and Cain seems like the perfect man since neither want more than the other is willing to give. Meaning, neither have to worry if the other wants more out of their relationship. Yet, what I liked most of all about the heroine is how Alison has made a difference in so many women's lives, because no one should have to endure what she did during her marriage.

While the hero, I liked that he wasn't afraid to ask for help when it came to helping his daughter with everything she's going through. Her mother's abandonment has done a real number on the teen, and it's understandable why she's acting the way she does. What if she loses someone else she loves? I also liked how kind, caring and determined Cain was to gain Alison's trust. Because it's palpable that talking about her past is painful, and yet, opening up to Cain is good for her. Then there's the growing bond between Cain and his brothers, which shows they will do anything for each other, and is proven when Cain goes through a worrisome time for any parent.

Overall, Ms. Yates has delivered a wonderful read in this book, where the chemistry was intense, the romance was hot, and which tugged at my heart-strings due to what both the hero and heroine have been through in the past that has made them wary of getting involved with someone else. Luckily though, Alison is willing to take a chance on Cain. The way this story ended had me a tad concerned that this couple might not achieve their happy ever after, as Alison is scared after what she went through in her marriage. Will Cain be able to win her over? Will her friends be able to make her realize that love is worth fighting for? However, it was the epilogue that wrapped this story up brilliantly, as it's told from a secondary character's point-of-view and reveals how good life is, despite everything they've been through and that makes this person realize that family is important. I would recommend Down Home Cowboy by Maisey Yates, if you enjoy second chance romances or books by authors Jennifer Ryan, RaeAnne Thayne, Carolyn Brown or Linda Lael Miller.

BLURB
This Texas cowboy has come home to Copper Ridge to put down roots…but will he risk his heart again?

Asked where he'd be at this point in life, Cain Donnelly would have said anywhere but Copper Ridge, Oregon, living with his estranged brothers. But since his wife abandoned them, both he and his daughter, Violet, are in need of a fresh start, so he's back to claim his share of the family ranch. Local baker Alison Davis is a delicious temptation, but she's also his daughter's mentor and new boss. That makes her off-limits…until she offers a no-strings deal that no red-blooded cowboy could resist.

Alison has worked tirelessly to rebuild her life, and she won't jeopardize her hard-won independence. Especially if it also complicates Cain's relationship with Violet. But with Cain offering a love she never thought was possible, Alison has to find the courage to let her past go…or watch her future ride away for good.
BUY LINK:  Amazon
at 19:30