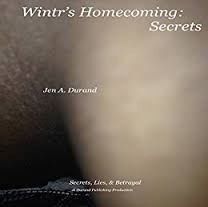 In Wintr's Homecoming: Secrets (Secrets, Lies & Betrayal #1) by Jen A. Durand, Jinx Wintr was determined to convince her friend, Nicole, to give up on getting married and return home. But, when she learns her past; the past she left behind, is now part of her friend's future, how can she possibly turn her back on her friend, especially when she's witnessed the destruction being the mate of a werewolf can be? However, she never imagined herself falling in love with her old crush. Will she turn her back on her mate, Dominic, or will she give him the happy ever after he's desperately hoping for?

I haven't read a lot of Paranormal Romance lately, so this story was a real treat to read. Due to the fascinating main and secondary characters, the history between the hero and heroine, the heroine's fear of relationships and the trouble the characters face because of a sadistic person that wants to discover all they can about the paranormal world. Will the heroine embrace her paranormal side to help the hero, or will she continue to live without acknowledging her abilities?

As for the dialogue, it was intense due to the investigation into the missing weres and other paranormals that turns out to be a lot worse than what Dominic and the others first assumed. Moreover, the heroine's pessimism when it comes to relationships also plays a huge part throughout and had me wondering if Dominic could overcome the heroine's aversion to letting him in. However, in saying that, I could understand why Jinx was so against relationships with weres, because she doesn't want to end up like her mom who struggled and still struggles after the death of her husband. She's the shell of the strong woman her mom used to be. How can Jinx even think about giving Dominic a chance after witnessing what her mom went through?

While Dominic, he's kind and caring towards Jinx's friends and I enjoyed how he won them both over so easily, as they want Jinx to find happiness. Also, he's confident and I liked how determined he was to win Jinx over, because he realizes what a battle he faces when she talks about her mother and father and how the mating between a wolf and his mate is both a curse and a blessing. But what I liked most of all about the hero is that he let didn't limit Jinx when she would be an asset in taking down those responsible for kidnapping weres. She needed to be involved to make her realize that just because her parents relationship took such a horrible turn when her father died, it doesn't mean that the same thing will happen to her and the man she falls in love with, if he happened to be a were.

Overall, this book was a really good start to this series for many reasons. Such as it introduces readers to two wonderful main characters as well as an array of secondary ones; there's really strong chemistry between the hero and heroine that illustrates Jinx may not have gotten over the crush she once had on Dominic; and the ending left me completely satisfied because of how far Jinx went to protect her man. Seriously, she is quite scary when she's at full power. Then there's what happens with Livia right at the end that left me completely intrigued and wondering what Livia would do. I would recommend Wintr's Homecoming by Jen A. Durand, if you enjoy paranormal romance.

BLURB:
Jinx Wintr was perfectly willing to be the get away driver should her friend, Nicole, decide to bolt on the eve of her wedding. Instead Jinx found herself running into old acquaintances and discovering an unwelcome surprise.

Dominic Lowell had changed. He no longer lived for the adventure. He yearned for a home. Only now he was hoping to build those things with her. Faced with the remnants of a childhood crush and the fear that history would repeat itself.

Should she continue to exist with a closed heart or should she trust the love of her wolf?
BUY LINK:  Amazon
at 21:14