Sometimes love speaks for itself… 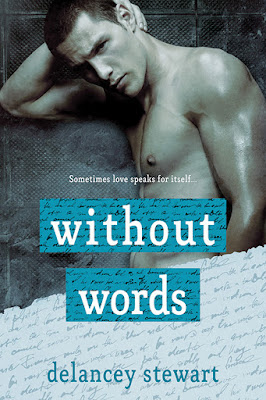 WITHOUT WORDS
By: Delancey Stewart
Releasing May 22, 2017
Entangled Select

In Without Words by Delancey Stewart, unable to be a firefighter anymore after an accident in the line of duty, Roberto 'Rob' DeRosa has been going through the motions, uncertain of what his future holds. Yet, the moment he meets Dani Hodge, he begins to discover what he wants out of life when he starts helping her renovate and organize her store for opening day. Will Rob be able to convince Dani to give him a chance at happy ever after, or will the disaster of her past relationship make her keep her distance?
What an utterly enchanting, fast-paced, uplifting read Ms. Stewart has penned in this story about a firefighter injured on the job and uncertain of his future until he meets the heroine; a woman cynical about men and relationships, but who finds it hard to resist the hero. The way this story started had me sympathizing with the hero, as he finds it hard to interact with people ever since his accident, which is palpable when he comes face-to-face with the heroine for the first time. However, I was glad that he finds it within himself to interact with Dani eventually, as she helps him re-evaluate his life and changes his life for the better.
As for the dialogue, it was a wonderful combination of intense due to the main characters back stories and teasing banter between Dani and Rob that I loved. Rob finds it hard to forgive his father after years of feeling like he wasn't as good as his brothers, and I could understand why he couldn't give his brother, Mateo, what he pleaded with the hero to do about his future. Not only because it would take him away from Dani who he wants to explore a relationship with, but because it isn't what he wants to do.
Both the main characters were fantastic, and I really enjoyed their back stories, despite wanting to cry for the hero because of all he's been through and the struggles he still faces, even though he's come a long way since his accident. Will he finally be able to move forward with his life and find something that he's passionate about career wise? Will being around Dani help to bring Rob out of his shell -- so to speak  -- and help him begin to interact with people besides those he's closest to such as his best friend, Trent, and his family? Seriously, the hero is strong, brave and I liked the way he grew throughout this story. Being with Dani is good for him, even if she holds herself back for fear of getting hurt like she did from her last relationship.
While the heroine, she's very independent, smart, and I liked that she knows what she wants out of life in terms of following her dreams. I also liked the close relationship she has with her sister, and the game they play. Certainly, they end up with some nice stuff from each other and I liked that eventually Rob finds a way to get involved in the game too, because it's a family tradition that illustrates that everyday should hold some fun for everyone.
Overall, Ms. Stewart has penned a superb and heartfelt read in this book where the chemistry was strong, the romance was enjoyable and showed just how right Rob and Dani are for each other. The way this story ended had me smiling, because these two are a couple meant to be. However, it was the epilogue that wrapped this story up perfectly, because of Rob's surprise for Dani. I would recommend Without Words by Delancey Stewart, if you enjoy the friends to lovers trope, a story encompassing a couple that battle some tough obstacles to be together or if you enjoy books by authors Melody Grace, Diane Alberts, Maggie Kelley or Cecy Robson.

BLURB
Sometimes love speaks for itself…


After an accident in the line of duty, firefighter Roberto DeRosa’s life is turned upside down. His career fighting fires is over, and he’s left with an uncertain future and an injury that makes communicating difficult for him. The only time words flow easily is when they’re lyrics and he has a guitar in his hands. Talking to women is definitely out, especially if they have bright blue eyes that seem to see right into his soul.
Dani Hodge is on the brink of realizing her dream of opening a small combination wine and book store in San Diego’s funky Ocean Beach neighborhood. But before she can open the doors, there’s work to be done, more work than she can do herself.

When the tattooed guy who completely ignored her at a bar walks by and offers her a hand wrangling a tile saw, Dani can’t afford to say no—and why would she say no to Mr. Strong and Silent when his stare conveys more than words could?

I caught Trent’s attention at the bar, putting my back to the girl and focusing on getting my heart to slow down, letting my blood cool.
And just when I’d gotten control of myself again, she was right fucking next to me, and my mind went blank.
Or most parts of my mind, at least. The parts in charge of caveman stuff—the parts that screamed at me to pick her up, throw her over my shoulder, and find a wall to fuck her against—those parts were working fine. Unfortunately.
“Hi,” she said.
Shit. Shit, shit, shit.
I stared at her. I was blank. I reached for a word to give her and my mind was empty. Even the one word she’d said would have been fine. I could have parroted it back to her. But it had fluttered up into the noise and light inside the bar and evaporated. Even that one simple word was out of my reach.
I watched her expression change. She’d said “hi” like she was extending a bridge, a thin filament I might just be able to risk stepping onto. But as she waited for me to return her greeting, to say fucking anything at all, the bridge dissolved.
And her face closed up. The sparkle in her bright eyes faded, and her energy pulled back inside her, leaving me cold again. A mixture of fear and surprise replaced the glow on her face, and I felt both guilty and monstrous as I watched what it did to her. She let other words fall between us. Nonsense, really. I’d made her uncomfortable, unhappy. And I already knew she was a girl I never wanted to see unhappy.
Finally, she turned around and went back to her table, pulled the other girl toward the door, and disappeared into the night beyond. And the strange light that had filled the club was extinguished.

Delancey Stewart writes contemporary romance from her home outside Washington D.C. In a house populated by two tiny pirates and one full-sized Marine aviator, inspiration for her heroes is never hard to find—though quiet time to write often is!