REVIEW: MORE THAN A SOLDIER by IRENE ONORATO 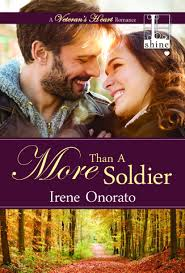 In More Than a Soldier (A Veteran's Heart #2) by Irene Onorato, after she discovered her boyfriend was cheating on her, Cindy Giordano has felt a little lost. Of course, she's angry and may never get over the betrayal, so instead, she's determined to pour all her energy into finding and meeting her brother, Edward. Except a simple meeting leads to so much more when she meets Hank Fleming, a scarred former special forces soldier that has survived a lot and still manages to see the best in life. However, with her ex determined to make her life a living hell, how can Cindy even think about giving another man a chance?

What an intriguing and gripping story Ms. Onorato has penned in this story about a heroine finding her family while facing the demons of her past; a hero that has such a positive outlook on life, even after all he's been through; secondary characters that were just as entertaining as the main ones; and a psycho ex that I hoped would get what was coming to him in the end. However, in saying that, I was a tad frustrated with the ending in thinking it was a little anti-climatic by what happened to Cindy's ex and the ending between Hank and Cindy cementing their relationship right at the end felt a little rushed after what happened with her ex. Still, I liked this story so much that the ending didn't bother me enough to want to give it less than four stars.

Both the main characters entertained me due to their strong chemistry, which was there from the moment they met; and their back stories that made me sympathize with the pair. Surviving the attack Hank did should make him angry at the world and the people that killed his comrads, but I liked that it didn't get him down and how he helped the heroine realize that she shouldn't let her ex get to her because things could be a lot worse. Really, Hank is good for the heroine, not only because he's protective, but because he shows her not all guys are like her ex; a man who cheated on her with someone she loves and then turns into a total psycho that will go to any lengths to win her back.

While the heroine, she's a woman down on her luck in having lost her job and with what happened when those she loved betrayed her, but I liked that she found a way to combat the pain by pursuing her chance to find and get to know her brother. Even more, getting to know Hank and seeing him thrive and be able to joke with her the way he does had me completely captivated. How could he still be so positive after all he's been through? Moreover, I liked how the heroine handled everything her ex puts her through, even though at times it's hard for her and I could understand why she acts the way she does towards Hank. Luckily, he doesn't allow her attitude to keep him from helping her.

Overall, Ms. Onorato has penned an engaging read in this book where the main and secondary characters -- especially Dexter and Vargas -- have me wanting to read more of this series. The way this story ended left me a tad disappointed with what happened between the main characters and Cindy's ex, but I'm glad that Cindy managed to win Hank back after what she does to him. Also, I liked the words Cindy and Hank shared at the end. It shows how serious Hank is about their future together. I would recommend More Than a Soldier by Irene Onorato, if you enjoy contemporary romance with a touch of suspense and religious themes, the sexy protector trope, stories containing ex-military heroes or books by authors Susan Stoker, Cora Seton or Cat Johnson.

BLURB
There’s more than one way to be a hero . . .
Former Special Forces soldier Hank Fleming is living a safe, quiet life in upstate New York, but there are days he isn’t sure he’s going to make it. The sole survivor of a devastating grenade attack in Afghanistan, he is still scarred, physically and emotionally. He hangs on to his faith and tries to keep moving forward, waiting for the day that something—or someone—can make him feel whole again.

Cindy Giordano is searching too—for her biological family and a fresh start. When her journey to find her brother, Edward, leads to Hank’s front door, she is instantly drawn to Hank . . . and instantly wary. With her ex-fiancé’s betrayal still fresh in her mind, friendship is about all she can muster.

When shadows from Cindy’s past threaten, Hank’s protective instincts shift into high gear, and he realizes everyone has their own battles to fight. But the road to healing would be much sweeter with the right person by his side . . .
BUY LINK:  Amazon
at 20:41