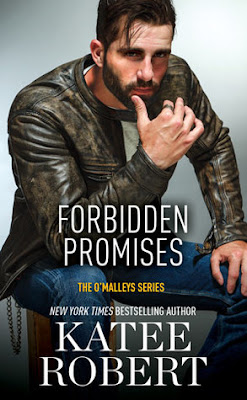 In Forbidden Promises (The O'Malleys #4) by Katee Robert, there's only one thing on Jude MacNamara's mind and that is revenge. He doesn't have time for his new neighbor, Sloan O'Malley; a woman with innocence written all over her, even though she's from a powerful mob family. However, Jude can't seem to stay away from her, which could prove dangerous. Will he be able to keep her safe, so they can achieve their happy ever after; or will there be consequences to being together?

I've only read one other book by Ms. Robert before and it wasn't from this series, so I was glad this story could be read as a stand-alone, even though it would have been nice to read the previous books encompassing the heroine's siblings. However, in saying that, the way this story started had me sympathizing with the heroine due to the dilemma Sloan is facing with what she's going to do with her life now that she's finally free of her family's hold over her, and I liked how she's moving forward to take care of herself. Will she thrive in the small town she's found herself in?

As for the dialogue, it was riveting and intense due to the main characters back stories, especially that of the hero. He wants revenge for what happened to his entire family, and he'll stop at nothing to get it. Can Sloan convince Jude that revenge is no longer the right solution to what happened to his family? That if he continues on the path he is on, his revenge could have consequences, especially with the knowledge she has about who he's targeting. However, there was also another side to the dialogue I enjoyed and that was the hero and his dirty talk. It's hot, sinful and certainly ups the sexual tension between this couple until their intense chemistry spills over onto the pages in sizzling sex scenes that illustrated Sloan needed a man like Jude to show her just how good physical intimacy can be.

Sloan was a wonderful heroine and I could understand why she needed to escape her family, because she doesn't want to be used as a pawn to cement the family's power. Moreover, Sloan is resilient and courageous and I liked all she's done to get to where she is in her life; a life she'll actually be able to enjoy without having to worry what her family will expect of her. Even if she does miss them and may have to worry that someone may discover her whereabouts someday. While Jude, he was an intriguing hero that  I thought definitely deserved his vengeance for what happened to his family. I also loved how protective he was of the heroine once he discovered who she was and that he wouldn't give in to the demands of someone trying to use him to suit their own agenda.

Overall, this was a really good read encompassing the forbidden romance trope, secondary characters that have me wanting to read the previous books and the next in this series and an ending that had me wanting to know what Sloan's family would do once they discovered who she was involved with. Would they let her go for good? Would they try to keep her away from Jude? Would Jude be able to keep Sloan safe, especially with what's going on with her? I would recommend Forbidden Promises by Katee Robert, if you enjoy the forbidden relationship trope, the sexy protector trope or books by authors Samanthe Beck, Lauren Blakely or Kaylea Cross.

BLURB
Some lines should never be crossed . . . not even for love.


Sloan O'Malley just left her entire world behind-her family, her wealth, and even her real name. For the first time in her life, she's free. She can live the "normal" life she's always wanted. A life without fear. But there's nothing safe about her intensely sexy next-door neighbor.
Jude MacNamara has no room for innocence in his life. Only revenge. Still, he's never been able to walk away from the forbidden, and Sloan-who is every inch of pure, mouthwatering temptation-has forbidden written all over her. Only after it's way too late does he discover the real danger: claiming Sloan as his puts a target on her back. To protect her, Jude is willing risk everything . . . and to hell with the consequences.
BUY LINK:  Amazon
at 21:52