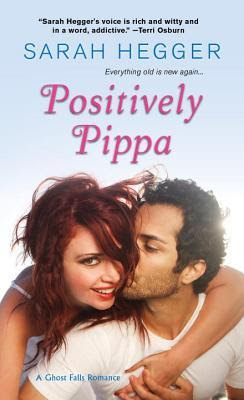 In Positively Pippa (Ghost Falls #1) by Sarah Hegger, when her ex-boyfriend dumps her for a younger woman and then ruins her career by airing a TV clip that does serious damage to her reputation, Pippa Turner returns home to Ghost Falls to avoid the media fallout. However, her stay in Ghost Falls is supposed to be temporary, but with her high-school crush determined to woo her, she's finding it harder and harder to want to leave town. However, when the chance arises to get her career back on track, will Pippa stay for Matt or will her return to TV and working again be too much incentive?

This is the first book I've read by Ms. Hegger, and I've got to say if all her books are this good, than I've been missing out on some fantastic reading. The way this story started was absolutely enthralling and drew me into this story immediately with what Pippa is facing when it comes to the fallout of her ex's betrayal. She's facing a lot of anger from the public, and no matter how much she tries to prove her innocence to the clip, she finds herself getting deeper in trouble. How could her ex be so cruel? Will the truth of what really happened come out?

As for the dialogue, it was intense due to the main characters back stories, as Matt sacrificed his own happiness to take care of his family and Pippa has always felt like she wasn't as loved as her sister when it came to her mom's affection. It's why she's so close to her grandmother, Phi; an eccentric old woman that loves to flirt and discuss the past, which sounded like such fun by everything she experienced and all the treasures she has. Whenever Phi was in the story I was smiling, which was a lot. She brings such joy to everyone's lives and I absolutely loved the nickname Matt and his brothers have for her, as it certainly suits her because of her past profession.

Both the main characters were compelling, not only because of their growing relationship, but because of their past and the challenges they face throughout this story including solving the case of missing treasure. Certainly, both have big decisions to make with Pippa trying to get her career back on track, but first needing to find a way to clear her name and prove her ex did wrong. Will she succeed? Will she find an ally to help her prove her ex was in the wrong? Indeed, she's strong, brave, independent and I loved that she was willing to give Matt a chance, even knowing that their relationship can't go any further than what they have while she's in Ghost Falls. Since she has a career to get back to that she believes can't be pursued in Ghost Falls, even if she wants to stay. While Matt, he can't leave their small town, because he believes his family would fall apart if he wasn't there for them. However, with the proposal Matt's brother offers him, it's finally time Matt did something for himself. Will he finally make some changes in his life?

Overall, Ms. Hegger has penned a delightful read that offered plenty of amusement from Phi and her flirting as well as the banter between the hero and heroine that created plenty of chemistry as they got to know each other again. The way this story ended had me concerned for one of the secondary characters, the identity of the thief and whether it would have an effect on the decisions the main characters made for their futures. Moreover, I liked that Matt was determined to do what's right for him and that he helped Pippa decide what was right for her too. Because these two were so right for each other, so no way should they let anything stand in their way of being together. However, it was the epilogue that wrapped this story up perfectly, as we discover how far Pippa and Matt have come in their relationship and their careers, which had me smiling. Since both deserved all the happiness in the world. I would highly recommend Positively Pippa by Sarah Hegger, if you enjoy the second chance romance trope, the friends to lovers trope or books by authors Alice Clayton, Kimberly Kincaid or Melanie Harlow.

BLURB
For Pippa Turner there is only one place to go when her life self-destructs on national TV home to Ghost Falls, and her heavily perfumed, overly dramatic, but supremely loving grandmother, Philomene. If anyone will understand how Pippa's hit makeover show was sabotaged by her vengeful ex, it's Phi. But she's not the only one who is happy to see her and Pippa can't help but wonder if Matt Evans, her gorgeous high-school crush turned Phi s contractor, is game for a steamy close-up.
Matt owes his whole career to Phi and her constant demands to embellish the gothically ridiculous house he built for her. Getting to see red-headed, red-hot Pippa is a bonus, especially now that she's no longer the troublesome teenager he remembers. He's willing to stay behind the scenes while she gives her own life a much-needed makeover, but not forever. As far as he's concerned, their connection is too electric to ignore. And the chance to build something lasting between them before she can high-tail it back to Hollywood is going to the top of his to-do list.
BUY LINK:  Amazon
at 17:54