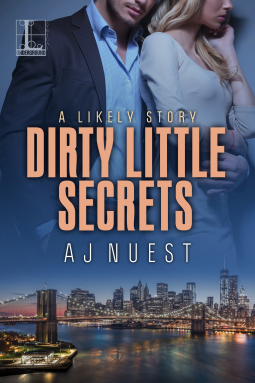 In Dirty Little Secrets (Likely Story #2) by AJ Nuest, Charlie McGovern is a talented thief, but after she steals something she shouldn't have, she makes a powerful enemy. Luckily, her long-lost friend, Xander Dade, re-enters her life and is determined to help her in any way he can. However, the secrets Charlie is keeping are too great. Can she trust Xander with the truth, so they can have a shot at happy ever after; or will her desire to keep her secrets end up getting her into trouble she may not be able to get out of?

What a wild and thrilling ride Ms. Nuest takes readers on in this second book of her Likely Story series, which was full of twists and turns that had me completely glued to each page; resonated the perfect amount of emotion for me to be able to feel along with the characters; and had two incredible main characters that drew me so much into this story due to their back stories and everything they go through that I could imagine myself as the characters, as Ms. Nuest's writing was so thoroughly bona fide and evocative. The way this story started with what Xander was doing made this story an automatic page turner for me, as I was determined to discover the outcome of his mission and whether it would come back to haunt him further down the track. Would he be able to handle what was thrown his way if he ended up in trouble? Since I had a sneaking suspicion that his target would be difficult.

As for the dialogue, it was well-written, gripping, a tad emotional due to the heroine's back story and had me on the edge-of-my-seat due to the danger closing in around the heroine as she does everything in her power to fight back against those that love to take advantage of people when they're sick. Seriously, I could understand why she was so driven in her mission, because of what happened to her brother. No way could she allow other kids to suffer what he did and not want to do something about it. Moreover, the heroine is strong, brave and I liked how determined she was to win against the bad guys, even though she knew things could get very dangerous.

While Xander, he's good for the heroine and it shows as they re-establish the tight bond they had years ago, even though she doesn't open up to him as much as she should. I also liked how he wins her over when it comes to her giving him a chance at a relationship between them. He shows her how beautiful he thinks she is through his words and his actions, which was heartwarming. Since she has serious self-esteem issues, which is proven by what happens in the beginning. Why do people have to be so cruel? Luckily, she knows how to kick butt and make people understand that harsh words can't hurt her as much as they used to.

Overall, this was a marvelous second book for this series where the chemistry was explosive, immediate the moment the hero and heroine come face-to-face and spills over onto the pages splendidly. Certainly, Xander knows how to treat Charlie right and shows her she's the only woman for him. The way this story ended totally blew my mind, because of the twist. I did not see it coming. It also had me worried for the heroine, as she goes through quite an ordeal. Will the main characters come out on top against the bad guys? I would recommend Dirty Little Secrets by AJ Nuest, if you enjoy romantic suspense, the friends to lovers trope, the sexy protector trope or books by authors Cate Beauman, Kelly Moran, Diana Gardin or Laura Griffin.

Xander Dade has a deep-seated regret, and the nomadic decade he’s spent doling out justice as a computer hacker hasn’t helped ease his conscience. Ever since Charlie McGovern was asked to leave the specialized revenge-for-hire business called Dirty Deeds, the curvy blonde bombshell has been stuck in his head. And now that the talented thief is being stalked by a dangerous enemy, Xander isn’t about to let her slip through his fingers—not when he’s so close to convincing her she belongs in his bed.

But desire is a dish best served hot!

Caught in a high-stakes game of cat and mouse, Charlie won’t be surrendering her secrets any time soon. Not even when long-lost friend, Xander Dade, shows up, packing a sexy agenda all his own. Her movements are being tracked, and accepting his help may put everyone she loves in danger. Things are getting too hot to handle, and selling her secrets to the highest bidder may end up costing more than her heart.
BUY LINK:  Amazon