REVIEW: FALLING FOR THE HOMETOWN GIRL by SHELLI STEVENS 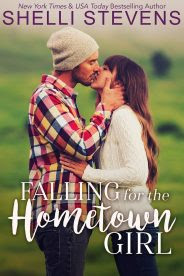 In Falling for the Hometown Girl (Marshall Ranch #2) by Shelli Stevens, Hunter Richardson hasn't been back to Marietta in a while, but now he's staying at Marshall Ranch for a week where he's booked a bachelor party for a friend. But the moment he comes face-to-face with Katie Marshall; the one person that has never been far from his thoughts, he knows his week will be a lot more interesting than what he imagined. However, no matter how much time they spend together, both know there can never be anything more between them than a week-long fling. Except once they part ways, will they both realize that they can't live without the other, or will all hope of happy ever after be lost?
Every book I've read by Ms. Stevens, I have immensely enjoyed. Yet, having not read the first book of this series, I dived into this one hoping that it could be read as a stand-alone, and I can say that it definitely can. From start to finish, this book kept me entertained, despite there being a jerk in one of the secondary characters. Katie is the good girl type and never one to do anything reckless, and yet, she throws caution to the wind by getting involved with Hunter. Will he stay in Marietta and finally be able to put the past behind him? The way this story started had me liking the heroine immediately, because it's palpable she's a people pleaser and gets along with everyone. Well, almost everyone, which is proven by how she stands up for herself against one of the secondary characters when she's treated rudely.
Both the main characters had interesting back stories, but most especially Hunter because he doesn't feel welcome in Marietta after how everything went down with his parents. He barely talks to them, if at all, and he knows he needs to make amends while he's in town. Will he be given a warm reception? I also liked how open and honest Hunter was about his feelings for the heroine, not only in the present but how he felt about her in the past. She's the one woman he's never been able to forget. Can Hunter convince Katie to give him a chance, even though he's hiding something from her? While the heroine, she's a Marietta girl through and through that doesn't plan to leave her hometown again. So, how could things possibly work out between her and Hunter when he lives in Seattle? She's also kind, caring, hard-working and I liked the close bond she shares with her siblings and her future sister-in-law, Claire. Luckily, she has Claire to give her sound advice when it comes to Hunter. Since she's so confused on whether to give the hero a chance or not, especially when she's casually dating someone else. What will she do about the other man in her life?

Overall, Ms. Stevens has penned a wonderful read in this book where the chemistry between the hero and heroine was all-consuming and illustrated they were incapable of ignoring the intensity of such chemistry. The way this story ended was delightful, despite Hunter's secret coming to light and it causing them to go their separate ways. Because Hunter realized he couldn't live without Katie, and I liked the surprise he had for her, as it proved how serious he was about them being together forever. I would recommend Falling for the Hometown Girl by Shelli Stevens, if you enjoy small town romances or books by authors Sinclair Jayne, Jeannie Watt to Eve Gaddy.

BLURB
Katie Marshall is known for her 'girl next door' reputation and for always playing it safe. So, when she books a bachelor party from Seattle at the Marshall Ranch, she isn't sure what to expect until trouble strolls in–Hunter Richardson, local bad boy turned successful software tycoon...and Katie's job gets a lot more interesting.

Hunter has always struggled to find his place in Marietta. Now, somewhat reluctantly, he's back in his hometown and not looking forward to a week on a cattle ranch... but that all changes when he sees Katie, the girl he could never forget from high school. A girl he shouldn't want anything to do with. Soon, he realizes he wants much more from her than just a guided tour of the Montana landscape.

Hunter’s plan had been to get through the week, before returning to Seattle and his million dollar gaming company. Instead, he finds himself falling for the hometown girl...
BUY LINK:  Amazon