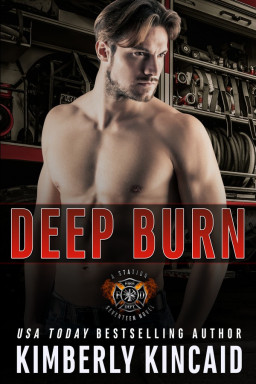 In Deep Burn (Station Seventeen #2) by Kimberly Kincaid, Shae McCullough loves being a firefighter, but when she does something reckless while on the job, she's sent to work with the arson investigation unit for two weeks. Except when she discovers a recent fire linked to the scene that led to her suspension, Shae isn't about to allow anyone to discount her instincts until she has all the facts. However, she never imagined she'd have to team up with James Capelli to find the truth. Yet, the further into the investigation they get, the more James finds too many coincidences that lead back to his past; a past he's moved on from, but has been unable to forget. Can James and Shae find the person responsible before it's too late, or will their chance at happy ever after go up in flames?

Ms. Kincaid writes really good contemporary romances, but her romantic suspense stories are even better in my opinion. Seriously, this book had everything that I love in a romantic suspense such as the right balance of suspense and romance; great main and secondary characters, even the bad guy who was pure evil; a fast-paced plot that never failed to entertain; and dialogue that had me laughing or smiling unless Shae or James were talking about their pasts and then I couldn't help but empathize with them both.

Right from the beginning, I was hooked to this story due to the opening line, because I wanted to know whether Shae would get her way; and due to the teasing banter between Shae and the rest of the firefighters of Station Seventeen. They're close and have a bond as tight as family, and I absolutely enjoyed every moment they interacted. As Shae doesn't have many people in her life, but the crew are there for her when she needs them. Furthermore, the dialogue was well-written, riveting and intense due to the main characters back stories that had me sympathizing with both Shae and James; and due to the investigation and how far the bad guy is willing to go to get his way. It is also told from not only the hero and heroine's point-of-views, but also the bad guy and when the story was told from his point-of-view, it was spine-tingling and had me gripping my kindle with worry for the main characters, because of how far the bad guy was willing to go not to get caught.

Both the main characters entertained me from start to finish due to their growing relationship; the investigation that takes them in a dangerous direction; and their heartbreaking back stories, which once I learnt more about Shae, I could understand why she takes risks. What happened to someone she was close to was a tragedy, and shows she should live every day like it's her last, because one never knows what the day will bring. While James, it's understandable how his back story has led him to be a man that follows the rules, because his life could have gone a different way, if he continued to allow those that were supposed to protect him to lead him down the path he was taking. I also liked how protective he was of Shae when the case began to unravel and that he would do anything to keep her safe, because he knew how dangerous the bad guy could be, considering the connection he had to the bad guy.

Overall, Ms. Kincaid has penned a brilliant second book for her Station Seventeen series where the chemistry was intense and instantaneous the moment Shae and James came face-to-face for the first time in this story and spilled over onto the pages in sizzling sex scenes that illustrated just how good these two are together. The way this story ended had me on the edge-of-my seat due to what the main characters go through when they go up against the bad guy. Even the best and most thorough plans can fail, and I liked how far James was willing to go to protect Shae, because if he hadn't been, then things could have turned out a lot differently. Good thing James is so sneaky and is good enough to outthink the bad guy. I would highly recommend Deep Burn by Kimberly Kincaid, if you enjoy romantic suspense, the opposites attract trope or books by authors Jennifer Bernard, Susan Stoker, Lynn Raye Harris or Cristin Harber.

BLURB
Firefighter Shae McCullough is all-in, all the time. When her reckless response at a fire earns her a two-week penance filing paperwork for the arson investigation unit, the rules and routines are enough to bore her senseless. But the discovery of a possible arson at a murder scene has her instincts fired up, and when Shae is assigned to assist Remington’s elite intelligence unit with their investigation, she’s all too ready to jump in with both boots first.

To tech and surveillance expert James Capelli, logic isn’t just a job requirement, it’s a way of life. He’s less than thrilled to work with Shae, whose impulsiveness threatens his sanity and whose curves threaten his composure. Despite their differences, they uncover a case bigger than anyone could have expected—along with an attraction that burns deep.

But this killer is no stranger, and Capelli’s got a dark past. Can he and Shae outsmart a ruthless murderer, or will his secrets bury them both?
BUY LINK:  Amazon
at 17:30