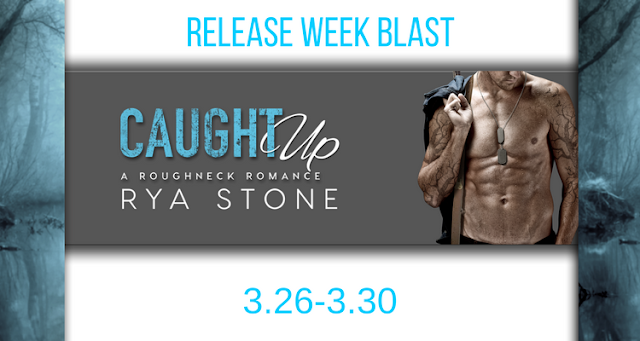 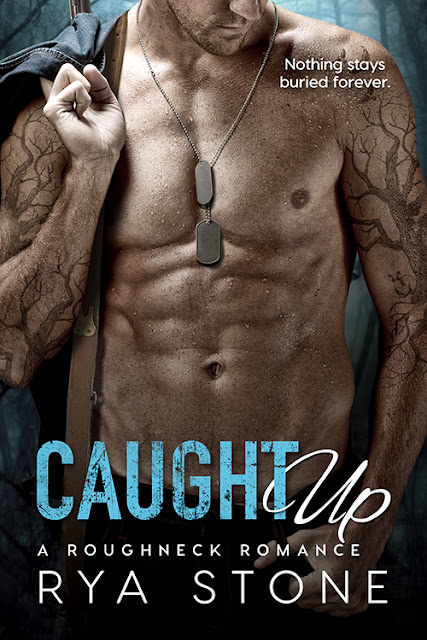 Steamy romance and contemporary suspense collide in this compelling debut novel from Rya Stone.
Cassie Mitchum is interested in one thing and one thing only—closing a deal on the Lucas property. Until she sets eyes on Jason “Jase” Lucas. He’s bad news, but he looks damn good doing it. She’s never been one for tattooed roughnecks, but she’s willing to make an exception, especially since he won’t look at her lease offer unless she agrees to a date with him. Jason Lucas needs Cassie Mitchum to stay the hell off his land. There’s more happening than she needs to be aware of—or mixed up in. With that feisty attitude and those tight jeans…he can’t get her out of his head. Too bad being close to her would put her on the radar of the most dangerous person Jase has ever known.

In Caught Up (Roughneck #1) by Rya Stone, Cassie Mitchum is determined to get Jason 'Jase' Lucas's signature to seal the deal she's looking to close on the Lucas property. However, the moment she meets Jase, she knows closing the deal isn't going to be easy, especially with his reaction to her presence. Yet, the more time she spends with him, the harder they both find it not to give in, to get what they both want -- a date in exchange for his agreeing to the lease agreement. But when the danger Jase has been trying so hard to keep her from closes in, will Jase be able to keep her safe or will the pair lose their shot at happy ever after?

When I started reading this book I couldn't decide whether I was going to like it, but I'm glad I gave it a chance because I found it to be a really good read in the end, as the hero and heroine clash in the beginning because the hero is determined to protect her from the reasons he wants her to stay off his land and the heroine is determined to get her way by making her presence known and spelling out the terms she wishes for him to accept. Will he give her a chance to explain what she wants? Will the heroine give up on getting what she wants? Who will win the battle in the end?

As for the dialogue, it was intense due to the main characters back stories and the danger that is closing in around the pair, as Jase is determined to finally right the wrongs of the past; wrongs that had to do with his family. Will the hero's brother fall in line? Furthermore, with the main characters, I liked how the heroine challenged the hero. She's feisty, resilient and I liked how determined she was to secure the hero's signature, even if it means agreeing to his terms. Yet, what I liked most of all about the heroine is that she would do anything for family, which is proven by her reasons for needing to secure Jason's signature. While the hero, he's confident, driven, and I liked how persistent he was in his pursuit of the heroine, especially once he realized there was no way he could stay away with her. I also liked the decisions the hero made when it came to righting the wrongs of the past because no way can he continue to look over his shoulder, especially because of the way he lost his father. Yet, what I liked most of all about the hero was how protective he was of the heroine and the lengths he goes to in order to keep her safe, even if it means making someone very annoyed with him; someone who would love to get revenge no matter who they hurt to get to Jase.

Overall, Ms. Stone has delivered a really good read in her debut book where the chemistry between this couple was strong and spills over onto the pages in very hot sex scenes that had me loving the hero's need for the heroine; and the ending had me worried for the main characters because of the danger, but had me loving the hero's determination to make things right with the heroine, especially after what he does that causes their relationship to go awry. However, it was the epilogue that wrapped this story up nicely, as the hero has the best surprise for heroine. I would recommend Caught Up by Rya Stone, if you enjoy contemporary romance with a good dash of suspense, especially suspense that keeps you guessing as to how many people are causing trouble for the hero; or if you enjoy books by authors Claudia Shelton, Jenna Ryan, Tessa Bailey and Sidney Halston.

The door slammed open, and as Jason Lucas filled the doorway, Cassie had the sickening thought he’d been listening from outside, ear to the door. His mouth didn’t say a word, but his eyes said plenty as they took her in, completely ignoring the other woman in the room. Cassie had never been so aware of a gravy stain and fought the urge to adjust her shirt or posture or…something.

“You’re the landman,” he said slowly, his voice thicker than she remembered.

“In the flesh,” she said, extending her hand, along with all the confidence she could muster.

Her arm languished, suspended, and she finally dropped it when she realized Jackson’s was covered in grease or drilling mud or something else a dozen dry cleanings couldn’t remove.

Karen clucked her tongue, but Cassie managed to hold hers. The man worked the rigs. He knew ‘landman’ was the industry term, and she didn’t feel the need to explain or tell him she’d considered using ‘land agent’ for a while but abandoned the idea because it sounded like she was pillaging the plains a hundred and fifty years ago, selling stolen Sioux lands to settlers. Wait. Was he…flirting?

Not likely. Not after the shut-out yesterday.

But the thought threw her off guard. Jackson Lucas took a step in her direction, and she struggled to don her game face. And it was a hell of a game. She was aware of every move she made in front of him, even while she told herself it didn’t matter what she felt when he looked at her. He was just another landowner, and she would conduct herself accordingly.

When he spoke again, she realized the husk in his voice was exhaustion. “Your title happens to be the epitome of inaccuracy.”

And, wow. Not your typical blue-collar response. “Roughneck is pretty inaccurate too,” she said. “From what I can see, your neck looks…” Like I want to lick it?

Yes. And she seriously wasn’t sure she could deal with this man, not this way.

“My neck looks what?” he demanded in the same tone he’d used with the men outside.

“Not rough?” She laughed, faking a confidence that had apparently gone weak in the knees, the traitorous bitch. And now it was awkward stare-off time. Karen’s amused presence wasn’t helping matters. Cassie hadn’t felt this intimidated in years. Maybe she was back in junior high, suddenly unable to form a sentence around a hot guy. Well, if he was going to study every inch of her, she’d reciprocate, no words needed.

She’d never been a fan of long-haired, tatted-up guys, but this one pulled off the half-ponytail without a hitch, and the ink was more like art. Tree limbs wrapped around his left shoulder, and it looked like…yeah, there was a bird…some animal, both hidden in the twisted branches. Fish and crabs and things with teeth covered his opposite arm. Dark and beautiful, the swirling images looked sexy-as-sin against his sweat-slicked skin. His sky-blue freaking eyes and stubble-covered jaw were too much to take in directly, and after another detailed study of his arms and chest, Cassie cleared her throat.

The man before her swiped a forearm across his grimy brow before glancing out the open door and up at the rig. “So you found me. Now what?”

When Rya Stone isn’t plotting away on her keyboard, she stays busy chasing children, cows, and a chicken named Dracula. Born and raised in a ranching family on the Texas Gulf Coast, Rya spent a decade in the oil patch before fleeing deep into the woods with her high school sweetheart and a mind full of inspiration for her Roughneck Romance series. Rya loves to cook but hates raw onions. Her favorite food is…well, everything. And, despite her upbringing, prefers Doc Martens over cowboy boots.