REVIEW: GIRL IN THE MIST by S.T YOUNG 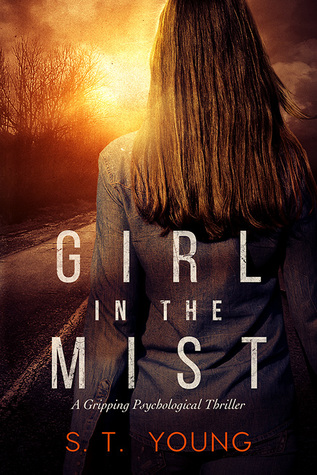 Infamous for infiltration and becoming her undercover identities, Nina Hernandez disappeared without a trace. Three years later, Naval Intelligence agent Rory O’Donnell finds her in a tortuous mental hospital. He's unsure if it's really Nina, or if she's undercover and faking it. Either way, he's pretty sure something sinister is going on...Rory springs Nina, and together they elude their determined pursuers. He needs to get her to safety...all while keeping his hands off the beautiful, mysterious young woman. As he works to convince her to trust him and share her darkest secrets, he wonders if he can trust her not to betray his...Between her mercurial changes, sexy come-ons, and her exasperating independence, a protection assignment has never been so hard. On a dangerous trek across the country as they tumble from one danger into the next, Rory finds that resisting Nina might just be his toughest task yet.

In Girl in the Mist by S.T Young, Nina Hernandez is a good operative able to infiltrate any place using the various identities she has, but now she's in trouble and when Agent Rory O'Donnell finds her in a mental hospital, he's determined to get her out. Yet, once he does, the pair have to go on the run to stay ahead of the trouble pursuing them. Will Rory be able to keep Nina safe so they have their shot at happy ever after, or will her torturous past keep her from ever finding happiness?

This is the second book I've read where one of the main characters has DID (dissociative identity disorder) or as it's also known as multiple personality disorder, and I've got to say that this author had me hooked, as Nina flips between one identity to another to another; identities that are all so different from each other. The way this story started drew me in immediately, as what's happening to Nina is terrible and something no person deserves to happen to them. However, it was from the moment Nina and Rory come face-to-face for the first time where this story gets very exciting, as Nina isn't about to trust anyone and will do anything to keep from being hurt again. Watch out, Rory!

As for the dialogue, it was intense and enthralling due to the main characters back stories, especially that of the heroine, because of everything she's been through that caused her to have multiple identities in order to cope; and everything this couple go through on their journey to happy ever after, as the danger closes in. Will this couple come out on top against the bad guys? Moreover, both the main characters were fantastic and I loved this couple together, as Rory does everything he can to protect Nina while Nina does her best to tempt the hero and challenge him with her need for action. Will Nina be able to convince the hero to take the fight to the bad guys? Will he realize how far she's willing to go before it's too late?

With the main characters, the heroine was resilient, brave and I liked how she handled everything she goes through. Really, she's a fighter with her personalities being completely different in order to help her survive the ordeal she's been through. There's the ever reasonable Octavia; the flirtatious Thyra; the resilient and afraid of nothing Lena; and the resourceful and cocky Joey. Each personality was interesting and had me liking the heroine more and more as this story progressed, because they help Nina to battle the evil inside of her and that is threatening her. While the hero, he's good at his job and will do anything to protect the heroine, even though things get very dangerous for him and the heroine is keeping things from him that could put his life at risk. I also liked how determined he was to resist the heroine, even though it seemed impossible. I also liked the hero's confident attitude when it came to his skills, which is proven when it comes to how the hero manages to get the heroine away from the mental hospital and then everything he does to outrun the bad guys until they realize that they can't keep running forever.

Overall, this author has delivered a superb read in this book where the chemistry between this couple was powerful and had me enjoying these two together; and the ending had me worried for the main characters, but had me liking that the heroine finally worked through her issues to be able to give the hero a chance. I would recommend Girl in the Mist by S.T Young, if you enjoy psychological thrillers or books by authors Margarita Montimore, Paula Hawkins, Julie Rowe and Sheryl Nantus.