We are excited to share HELPING HER REMEMBER by Kate Carley. Fans of second-chance romance will find this heartwarming story of redemption. Follow the tour for exclusive excerpts, reviews, and a chance to win a $25 Amazon gift card + three runner-ups will get an ebook copy of HELPING HER REMEMBER. 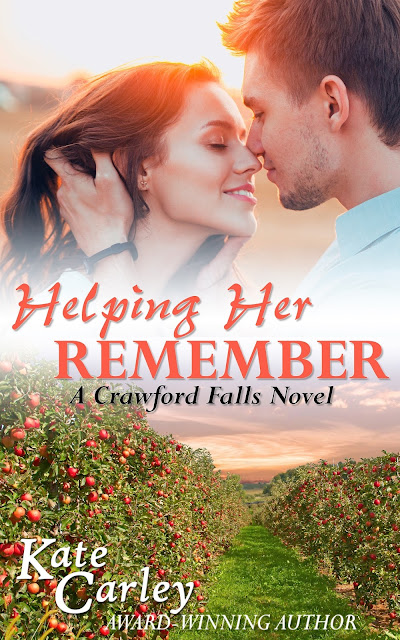 Kelly’s back.
How can two simple words make Dylan Bronstad’s heart ache and sing at the same time?
Even seven years ago, Kelly Anne Leeson had possessed that power. Back then, all Dylan wanted to do was drink and make love to her. Really, it was no wonder she’d climbed out of his bed and walked out of his life, leaving him with nothing but a nasty hangover and the lonely memories of their time together.
Today, Dylan’s life is on track. He’s sober with the support of his family and his tight-knit group of friends. But Kelly could derail all he’s worked to accomplish. Unfortunately, he can’t seem to stay away from her.
Lured by the offer of her dream job, Kelly returns home to Crawford Falls and the friends she’d abandoned a lifetime ago. Mending those broken relationships will require some honest answers and a fair amount of forgiveness.
But facing Dylan will take a lot more—like maybe a suit of armor to protect her battle-weary heart and the secret she fears she’ll never be able to keep.
While Kelly searches for a way to maintain the safe life she’s created for her son, Dylan works to remind her of the relationship they once had.
Just as they rekindle their relationship, secrets and half-truths threaten to destroy everything.

In Helping her Remember (Crawford Falls #1) by Kate Carley, Kelly Anne Leeson is back in town, which is something that Dylan Bronstad is totally unprepared for. However, once he gets over the initial shock, he finds himself determined to win her back. Yet, Kelly doesn't know whether she can trust him, not after the reason she left town in the first place. But when secrets come to light as they begin to rekindle their relationship, will this pair be able to forgive each other, or will they lose their second chance at happy ever after?

This book was a story I liked in the end, even if I thought -- in the beginning -- the hero was trying too hard to win the heroine back and they're settling back in their relationship like it was in the past happened a little too soon. Shouldn't the heroine have been a little more wary, considering why she left in the first place? However, in saying that, these two had some difficult obstacles to overcome and I liked how things worked out for the best between them, especially considering the secret the heroine had been keeping from Dylan.

Both the main characters were enjoyable, but the secondary characters frustrated me a little, especially Kelly Anne's mom with her need to tell her daughter everything and her attitude towards relationships. However, in saying that, I did really like Kelly Anne's son. He's adorable, full of spirit and knows what he wants. Moreover, the heroine is resilient, courageous and I liked how she handles everything she goes through both personally and professionally. Her secret coming to light isn't easy and brings forth plenty of emotion for the main characters. I also liked that the heroine was willing to give the hero a second chance because it's palpable he has changed.

While the hero, he's confident; done well to turn his life around because of the reason the heroine left him in the past; and I liked how determined he was to win back the heroine, as she's the only woman he's ever loved. However, I couldn't help but sympathize with the hero and his brother because of what's happening with their dad. Yet, what I liked most of all about the hero is that he has such great friends that are willing to look out for him, especially his best friend that isn't afraid to give his opinion.

Overall, this was a book that I liked where the chemistry between this couple was strong; the romance hot; and the ending had me feeling sorry for the heroine because of what happens when it comes to her job, but had me liking how things work out for her and Dylan since there's so much love between them. I would recommend Helping her Remember by Kate Carley, if you enjoy second chance romances, small town romances, or books by authors Kelly Moore, Paige Warren, SM West and Heather Heyford.

Isn’t that your turn?” she asked, huffing embarrassingly loud when they passed the county road and made their way up a fairly steep incline.

“Don’t need to. I’m a big girl, you know?” Kelly could feel his lazy perusal from her head down to her toes and back again. She was sweaty and gross, and he was checking her out. Unbelievable.

They ran in silence the rest of the way, because it was just too damn hard for her to talk. And he knew it. When they reached the top of the hill and turned onto her street, he said, “Let’s cool down.” They slowed their pace to a casual walk. “I never get to run with anyone. That was nice.”

“But you cut your run short for me. And it’s obvious, you’re in far better shape than I am, given that you can actually talk and run at the same time.”

Dylan just laughed at her comment, clasping his hand with hers, lacing their fingers together. “Go out with me, Kelly Anne. I’ve missed you, and I really want to get to know you again.”

The feel of his hand in hers and that sweet invitation sent a familiar surge of excitement through her. Kelly’s heart squeezed and her stomach did that little flip-flop rollercoaster thing again. As always, her body seemed to respond so naturally to Dylan’s attention. Or perhaps foolishly was a more appropriate definition of her response. While he apparently had warm memories of their time together, to her their relationship had been like watching an incredible firework display—spectacular, bright, loud—and then she’d been plunged into a dark, silent night all alone.

Kelly came to a stop near the side of her mom’s house and turned to face him, sucking in a deep breath and trying to ignore the nice hum of arousal playing through her body. “Jesse’s your best friend, right?” She didn’t wait, because she knew the answer. “Do you hold his hand like this when the two of you are together?”

Classic Dylan reaction. He burst into laughter and then released her hand to give her a brief hug. When he stepped back, he wore that expression that generally got him exactly what he wanted. Kelly sighed and shook her head. “No, Dylan. I’m not interested in dating.”

Dylan moved in closer, tilting her chin up with one finger so she’d be forced to meet his eyes. Why did he insist on touching her like that? It did crazy things to her brain, not to mention the fact that it all but melted her resolve. “You’re kidding me. Come on, Kelly Anne. We were great together. Why not try it again?”

Because I know my heart will never survive. 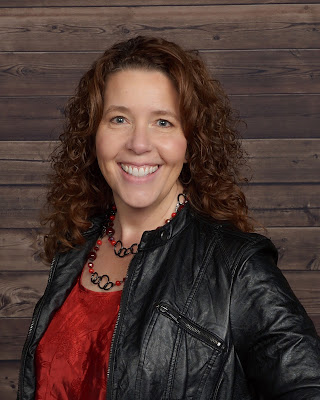 How Kate Carley went from majoring in mathematics and computer science in college to writing steamy contemporary romance still remains a mystery. She broke out into the indie publishing scene in 2015 with her debut novel, Challenged, a 2017 RONE award winner. Two more books completed her romantic suspense trilogy, Changing Krysset. With three published works under her belt, Kate is excited to launch her new contemporary romance series. Just like her first novels, the Crawford Falls series is set in a small town in Kate’s home state of Minnesota. When Kate isn’t busy at her desk writing, you’ll find her dreaming up new characters and plotting perfect ways to make their lives miserable before giving them their happily ever after.