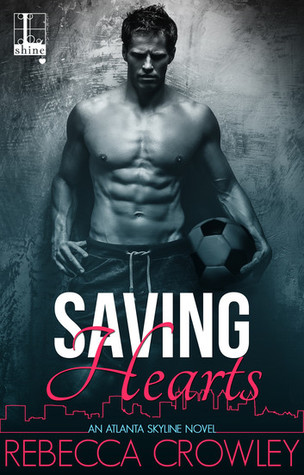 LOVE’S A CALCULATED RISK
Atlanta Skyline’s benched goalkeeper Brendan Young would have been happy to ride out the end of his contract after his gambling addiction was splashed all over the news media. Instead, his teammates’ injuries have unexpectedly put him back in the game. A new face in his weekly Gamblers Anonymous meeting provides another surprise spike — of pure attraction. Why is Erin Bailey, former world champion women’s soccer player, at this meeting? And why can’t he stop thinking about their red-hot one-night stand? Six months ago, one reckless night in Vegas ended with Erin in Brendan’s bed. She’s sworn off dating athletes, especially those whose reputations could destroy her new career as the Championship Soccer League’s Director of Ethics and Advocacy. But the secret they share — and the crazy heat they generate — makes it impossible to keep her distance.Both have choices to make about the future, but no matter how steeply the odds are stacked against them, walking away could be the riskiest move of all . . .

In Saving Hearts (Atlanta Skyline #3) by Rebecca Crowley, Six months ago Brendan Young and Erin Bailey spent an incredible night together. However, now with Brendan in trouble over gambling on games and Erin in her new career as he Championship Soccer League Director of Ethics and Advocacy, she knows she should keep her distance from Brendan, if she doesn't want to lose everything she's worked so hard for. Yet, staying away from Brendan isn't easy, and the closer they get, the more she finds herself wanting the one thing she's never wanted -- a relationship. Will she and Brendan get their happy ever after, or will everything she's worked so hard for cause the pair to walk away from the other before they crash and burn?

The first two books of this series are absolutely brilliant and had me looking forward to reading more about the men of the Atlanta Skyline Soccer team and I've got to say that Brendan and Erin's story was an absolute delight, as both are struggling with addiction that could get them into trouble. Will someone discover what's going on between them that goes beyond the pair being a couple? However, it was from the moment the hero and heroine came face-to-face for the first time that had me smiling, as Brendan can't believe his eyes as to why the heroine would be at the same place he is.

As for the dialogue, it was intense due to the main characters back stories and the obstacles these two face on their journey to happy ever after including who will get the upper hand in their attempts to blackmail each other. Will it be Erin or Brendan? Moreover, the heroine is resilient, courageous and I liked how determined she was in her game with Brendan. I also liked how hard-working she is, which is proven by all she's trying to do for women in soccer. Yet, what I liked most of all about the heroine was the decisions she makes to be able to finally get herself in control when it came to her needing to turn up at the same meeting that Brendan did in the moment when they first came face-to-face. While the hero, he's done well in his career as a soccer player and I couldn't help but sympathize with all that he's going through after being caught for gambling. Will he finish his career on a high? I also liked how confident and smart the hero was and that he would do anything to protect the heroine, especially when she might lose the one thing that's very important to her. Will the hero be able to protect her?

Overall, Ms. Crowley has delivered another captivating read for this series where the chemistry between Erin and Brendan was heady and convincing; the romance was delightful and had me liking these two together; and the ending had me loving the heroine's determination to win back the hero after things go awry between them. Luckily, she's just as determined to protect Brendan as he is to protect her. However, it was the epilogue that wrapped this story up nicely, as Brendan and Erin are so happy together and the hero makes everything more incredible with the surprises he has in store for Erin. I would recommend Saving Hearts by Rebecca Crowley, if you enjoy the enemy to lovers trope or books by authors Jen McLaughlin, Cindi Madsen, Amy Daws and Jennifer Ryder.