BLOG TOUR - REVIEW: TO SAVE A SAVAGE SCOT by TAMARA GILL 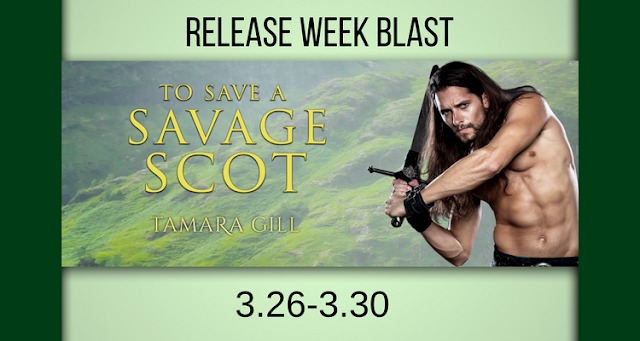 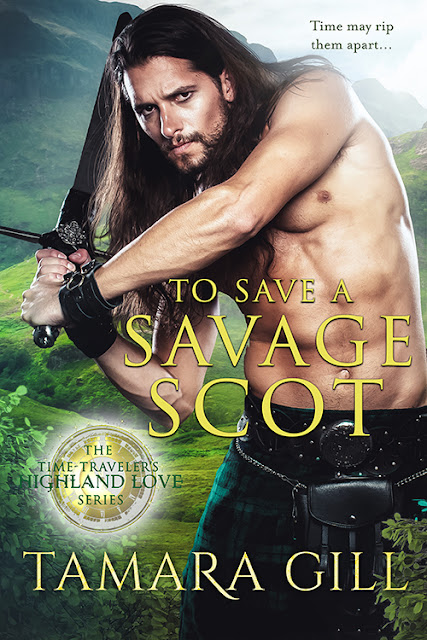 Kenzie Jacobs is fascinated by a portrait of the roguish Highlander, Black Ben, which hangs in her ancestral home. There’s a mystery surrounding his death, and Kenzie longs to solve it by traveling through time to 17th century Scotland—and perhaps meet the gorgeous laird who haunts her dreams.Black Ben, Laird of Ross, suited his dark name more than ever since his wife died in childbirth. He has vowed never to marry again. But Kenzie is an intoxicating elixir and even more potent than whisky. As confusing and crazy as she may seem, he can’t get her out of his system. But there’s no way they can ever work, as she does not fit into his plans.Fate has brought them together, and Ben can’t stop Kenzie from returning to her time, though he would do anything–except marry her–to keep her with him. Kenzie has a life to get back to but leaving her favorite, though infuriating, Highlander behind, might be the toughest thing she’ll ever have to do.

In To Save a Savage Scot (Time-Traveler's Highland #2) by Tamara Gill, fascinated by the mystery of the death of Black Ben, Kenzie Jacobs is determined to find the truth, even if it means traveling back in time to when he lived in 17th century Scotland. But as Kenzie and Ben get to know each other better, there's just one problem. Sooner or later, she'll be returning to her time. Will she be able to convince Ben to go with her, or will they lose their chance at happy ever after?

What an extremely engaging and fascinating read Ms. Gill has delivered in this second book of her Time-Traveler's Highland series where the fast-paced plot drew me in from the beginning and had me reading quickly, determined to discover whether the heroine would get the answers she wants; the main characters were compelling and had me intrigued by their back stories, especially Black Ben, as he's been through so much in losing his wife and not coping with her death; and the dialogue was absolutely riveting, as someone is determined to see that Ben and Kenzie have no future together. Will Ben and Kenzie be able to overcome the obstacles they face together including whether Kenzie will stay or return to her time and the trouble Ben faces that could cost him his life?

As for the dialogue, it was intense due to the main characters back stories and the danger these two face because no way will Kenzie let the hero face it on his own. Moreover, the heroine is resilient, courageous and I liked how she stood up to Ben's in-laws who are rude and nasty and don't deserve to have such a good man like Ben in their lives. I also liked how determined she was to help Ben, even though it's difficult for her to open up to him about the real reason why she's time-travelled. Will she ever confess why she's moved through time to 17th century Scotland? Yet, what I liked so much about the heroine was her determination to win Ben over, especially when she does something he may end up hating her for. While the hero, he's strong, brave and I liked how determined he was to protect Kenzie, especially since she's not used to the barbarity of the time and why people are so willing to hurt others. I also liked how loyal the hero was to his people and that he would do anything to keep them safe, even if it means putting his own life on the line. Will Ben be able to protect his people?

Overall, Ms. Gill has delivered a wonderful read in this book that I could not put down and where the chemistry between this couple was intense; the romance was delightful and had me loving these two together; and the ending had me worried for the hero and heroine because of the trouble they face, but had me cheering for this couple's happy ever after because of how they overcome their biggest obstacle to be together. Will they stay in 17th century Scotland or will Ben go with Kenzie back to her time period? I would recommend To Save a Savage Scot by Tamara Gill, if you enjoy Time Travel Romance, the mysterious strangers trope, or time-traveling books by authors Angeline Fortin, Catherine Bybee, Nancy Scanlon and Sabrina York.

His contemplative gaze raked over her form, and she shivered. What was it about this man that made her react in such a way? For a start, he stank, seemed to be an alcoholic, and was nosy, to boot.

Dismissing her stupid reaction, Kenzie concentrated on rubbing the cloth over his temples and working her way down his neck. The scattering of hair peeking through the top of his shirt gave her pause, and she wondered if he was overly hairy or just a little as she preferred. No one wanted to sleep with a bear, after all.

“A relative of both of theirs, eh?” He groaned and rolled to his side, forcing her off the chair. “A bucket. Quickly, lass.”

“Oh my God, seriously?” Kenzie looked about the room, and spying a peat bucket beside the fire, she tipped the little bricks of peat onto the ground and raced back to his side.

Great heaving and the sound of a lot of whisky coming up filled the room for the next few minutes, along with a smell that Kenzie never wanted to experience again. Rinsing the cloth, she passed it to him when he seemed to be finished and watched as he wiped his mouth and chin. “You’re very pretty lass, and very similar to my Gwen.”

The word ‘my’ wasn’t lost on her, nor did she like hearing it. “Gwen isn’t yours, sir. And I don’t care if you find me pretty or I remind you of Gwen. You, sir, are a sickly drunk who doesn’t have any respect for his own wellbeing.”

It was his turn to look stunned. “Sickly drunk? I’ve been called a lot of things in my life, but those two terms have never been two of them. Perhaps you ought—”

Kenzie held up her hand. “I don’t want to ‘ought’ anything. All I wish is to get you better so you may leave and get on with ruining your own life, which, if your appearance here this evening is any indication, you’re quite on the road to doing. Laird indeed…”

Tamara is an Australian author who grew up in an old mining town in country South Australia, where her love of history was founded. So much so, she made her darling husband travel to the UK for their honeymoon, where she dragged him from one historical monument and castle to another.

A mother of three, her two little gentleman in the making, a future lady (she hopes) and a part-time job keep her busy in the real world, but whenever she gets a moment’s peace she loves to write romance novels in an array of genres, including regency, medieval and time travel.