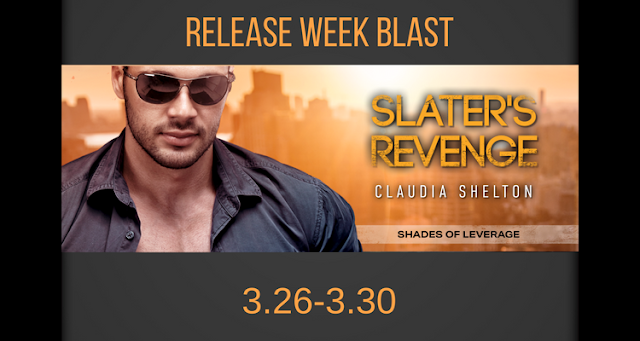 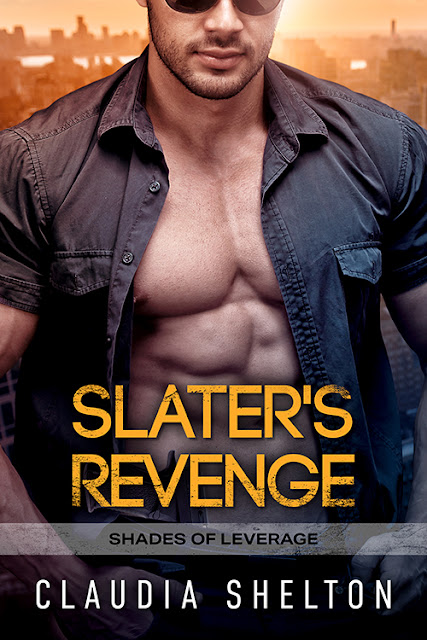 Former vice cop Mackenzie Baudin is at the top of criminal organization Coercion Ten’s hit list. If they get hold of her, she’ll be leveraged against her uncle, director of OPAQUE’s special ops force. She’s now saddled with agent-protector Josh Slater. He might be hotter than ever, but she’ll never forgive him for walking out on her ten years ago. Unfortunately her penthouse, which is now his domain, is way too small for the both of them. No one else knows better than OPAQUE agent Josh Slater how to thwart Coercion Ten. After all these years, he's closing in on the crime boss who bought his father for a bank account, but, that entails returning to his hometown to protect his boss's niece. The only woman he ever loved. Sexy, gorgeous Macki, who he was forced to leave behind. And he can never tell her why.

In Slater's Revenge (Shades of Leverage #1) by Claudia Shelton, OPAQUE agent Josh Slater hasn't seen Mackenzie 'Macki' Boudin in years, but when he's sent to protect her, he knows he has to face the past. However, he knows protecting her won't be easy, especially after the way he left her at a time when she needed him most. Still, he's determined to keep Coercien Ten from doing her any harm. Will Joshua be able to find a way to get Mackenzie to forgive him for what happened in the past, or will the secret he's keeping from her tear them apart for good and lose them their second chance at happy ever after?

What a thrilling and captivating tale Ms. Shelton weaves in this first book of her Shades of Leverage series, which encompasses the sexy protector and  enemy to lovers tropes; a wonderful combination of suspense and romance that had me reading quickly, determined to discover whether Josh would be able to win Macki back while keeping her safe; two main characters that are strong-willed and challenge each other, especially Macki because she knows Josh is keeping something from her; compelling dialogue that made this story a real page turner due to the main characters back stories and everything they go to on their journey to happy ever after; and secondary characters that kept me guessing as to who was a good guy and who was a bad guy. Will Josh be able to figure out who is on his side before it's too late?

Both the main characters were exceptional and I loved how what Josh is keeping from the heroine and the hero abandoning Macki in the past creates a lot of tension between them. I also loved every moment these two converse, as Macki is resilient, very independent and not one to be left behind when things happen that need to be investigated. Will Macki get her way? Furthermore, I liked how the heroine handled every new bit of information she receives about OPAQUE and how it's had a big impact on her life because of her family's association with the organisation. Can she handle the truth about OPAQUE, Coercion Ten and why she's become a target? Can she handle the news about her parents and why what happened to them did happen?

While the hero, he's very good at his job, which is proven by what he did on his last mission and how far he's willing to go in order to protect Macki. I also liked how confident he is when it comes to his skills as an agent and how protective he is of Macki, even though he knows he can't protect her forever from what he's hiding. Really, the truth must come out, even if she ends up hating him in the end. Yet, what I liked most of all about the hero is the way he opened up to the heroine because all their cards need to be put on the table and finally exposed if they're to get their happy ever after.

Overall, Ms. Shelton has delivered an incredible read in this book where the chemistry between Josh and Macki is heady and convincing; the romance shows how compatible and right these two are for each other exceptionally; and the ending had me on the edge-of-my-seat and a little in shock, as the bad guys are finally exposed and Macki and Josh finally face off against them. Will Josh be able to to keep Macki safe? Yet, what I liked most of all about the ending is how things work out for the hero and heroine, as they're meant to be together and this time they shouldn't let anything keep them apart, especially not once the real truth is exposed and absolves Josh of his guilt. I would recommend Slater's Revenge by Claudia Shelton, if you enjoy romantic suspense, the sexy protector trope, the enemy to lovers trope, or books by authors Rya Stone, Jenna Ryan, Laura Griffin and Kendra Elliott.

Another lull in the conversation. Silence that played in sharp contrast to the sharp beat on the street. (His boss) Drake was usually on and off the phone in a flash. Why was he dragging out the call? Macki…that's why. Drake had been responsible for her welfare for so long, he didn't know how to stop.

"Anything else?" Josh asked.
"No, just… Keep your eyes out for her."

Drake sighed heavily. "Stay sharp. You may not recognize her in that lady-of-the-evening outfit and spikey white wig." The call ended.

Josh stopped cold in his steps. Stared at the crowd gathered at the far side of the intersection. The crowd parted just enough that he glimpsed what looked like yellow crime scene tape. EMTs. Cops. Detectives. Pink? Pink? He searched for any signs of pink, but the gawkers were packed so close together, he couldn't see past the perimeter.

Cold fear flashed through his body as the scene shot to his brain. Accident? Crime? Macki? Damn-it-to-hell, please don't let it be Macki. Not my Macki.

His insides pulsed with adrenalin as he slammed the phone in his pocket and headed toward the crowd. He wanted to run, to yell her name, but he had to keep his cover. His only sure ally in Riverfalls was his cover.

She'd promised to stay in the car. To wait for him. He'd trusted her word. Should have known she wouldn't follow his instructions.

"Get out of my way." Pushing through the congregating people, he struggled to get to the front of the line. People stepped aside and when they didn't, he elbowed them out of his path. All he cared about was getting to the edge of the crime scene tape.

A whisper of jasmine and vanilla triggered his senses, pulling him to another time and place.

Macki? He stopped. Turned to his left, scanning the people close by. She wasn't there.  Had he only imagined the fragrance from years ago? Completely lost his mind before he even laid eyes on her? Not likely. He was a stronger man than that. Inhaling through his nose, he homed in on the scent's origin.
Close…she was close…closer than—

"Excuse me." A woman in pink, with spiky blond hair, seemed to deliberately shoulder bump his arm as she brushed past and kept on walking.

His gaze gave her a quick up and down as recognition shot to his gut and grabbed hold like a vise, twisting and turning 'til his brain caught up with his body. His head zeroed in on the tight little skirt being worked with a boatload of finesse.

He'd found Macki. And, from the view of her backside as she pushed through the crowd, his Macki had grown up, and then some. He silently groaned. All signs pointed to the fact, his assignment had just got harder. Harder than hell.

Bracing against the side of the tub, he eased his gun from the back of his jeans and laid it on the floor beside him as he sat down. Something about the ease with which he did it seemed as natural to him as breathing.

He leaned back against the towel cabinet and closed his eyes, sighing long and easy as if he were a man home from a long day at work. "This is nice."

Award-winning romance author Claudia Shelton could write her name before she started grade school. Now, she writes about alpha heroes and the women strong enough to love them. And, most times, there's a splash of suspense, intrigue or adventure, woven in to the story.

From watching movies and reading books through the years, the idea of sexy heroes, sassy women, and happily-ever-after became the forefront of her writing. Plus, in her world, the "good" guys always win.

On a personal note, Claudia's main priority is spending time with family, friends and her two sweet, conniving rescue dogs. She loves music and art, wind and water, hot chocolate and bracelets. And, don't even get her started on shoes or earrings.