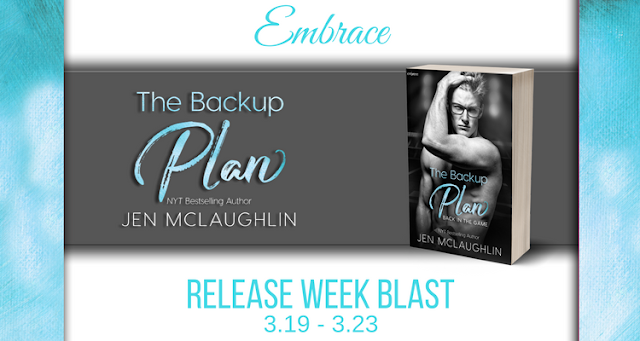 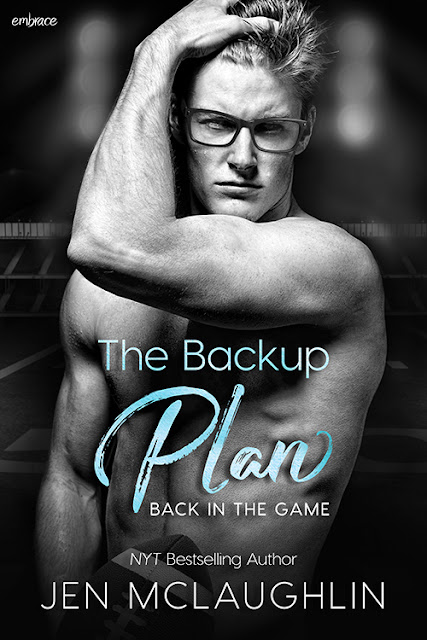 The Back-Up Plan
Back in the Game #1
By Jen McLaughlin
Releasing March 19th, 2018
Entangled Publishing


I threw a football before I could walk. Everything in my life revolved around football–and I loved every second. I was a star. Until, suddenly...I wasn’t. Now everyone thinks I’m the monster who killed his best friend. I’m an outcast on campus, silent and alone. Then Taylor Selmer walks back into my life. When will she learn–I’m beyond saving.
I need to save him...


Chase and I used to be friends. But after the accident, nothing was the same. We used to have something special–until we didn’t. But he doesn’t smile anymore. Doesn’t talk. Doesn’t play. It hurts me to see him this way, and I will do everything I can to get him back in the game. Whether he likes it or not.

In The Back-Up Plan (Back in the Game #1) by Jen McLaughlin, Chase and Taylor were once really good friends, but with her parents being employees of his rich family, there was no way they could be anything more. However, with Chase going through a rough time after the death of a friend and being on the wrong end of accusations, Taylor may be the only person that can help him. Will Taylor be able to help Chase get his life back on track, so they can achieve forever after; or will family pressure and his past demons keep them apart?

What a splendid and captivating read this author has delivered in this first book of her Back in the Game series where opposites attract; the main characters back stories were enthralling and had me reading quickly, determined to discover why they lost touch and whether the heroine would be able to help the hero begin to enjoy life again after everything he's been through; and the dialogue was compelling, as Taylor isn't about to let Chase get away with anything, especially not turning her away. She has a job to do and there's no way she's going to fail, especially when she has so much to lose if she does.

Both the main characters were relatable, likeable and I loved how their relationship blossoms from Chase being a tad rude to almost finding his way back to his old self because of Taylor. Moreover, the heroine is resilient, courageous and I like how determined she was to help the hero because it's palpable he needs a friend. I also liked how feisty Taylor was and that she didn't let Chase's attitude at times get to her, even though there are times when both need to walk away before they say something they regret. Yet, what I liked most of all about the heroine was her love for her family and that she wouldn't let anything interfere with them losing what they have in life. While the hero, he's been through so much and I liked his road to recovery, as it showed him who his true friends are. How could anyone think so badly of him when it came to the death of his friend? I also liked how protective the hero was of the heroine, especially when it comes to an arrogant jerk that gets a little nasty.

Overall, this author has penned a really good read in this New Adult Romance where the chemistry between this couple was strong; the romance nicely-detailed; and the ending had me loving the lengths the hero was willing for his relationship with the heroine. No way was anyone going to keep them apart. I would recommend The Back-Up Plan by Jen McLaughlin, if you enjoy the opposites attract trope, the friends to lovers trope, or books by authors Robin Bielman, Megan Westfield, Beth Anne Miller and Cindi Madsen.

The door opened...making me fall backward into Chase’s pitch-black room.

When I landed against something hard and naked, arms closed around me without hesitation.

A palm brushed my right breast, sending a wave of awareness shooting through me. I tried not to think about that, though.

Guys were nothing but trouble.

I had bigger plans than falling for a smooth talker with bright eyes and a fake smile who would do nothing but distract me. Once I managed to regain my balance, I spun on my heel and looked at him.

The room behind him was dark, but the hallway illuminated his hotness. And once it did? I wished I hadn’t looked at all.

He stood in the doorway, looking completely unfazed by the fact that he’d basically just felt me up, and glowered at the guy in the hallway. He was shirtless, and wearing nothing but a pair of black sweats. His chest was hard and chiseled, and his abs...yeah. I wasn’t gonna touch upon those for the sake of my own sanity.

Waxing poetic over his abs wasn’t part of my job description.

“Uh, hey...” the guy in the hallway said, trailing off after a feeble attempt at pretending he hadn’t been talking crap about him moments before.

Chase’s green eyes met mine before focusing on the guy in the hall again. His sharp cheekbones were the same as I remembered, and so was his short brown hair. He used to have dimples in his cheeks when he smiled, which had softened the harsh lines of his face and given him a softer appeal, but I had no idea if they still existed since he hadn’t smiled at me yet. Or...at anyone all day. Had he forgotten how?

He said nothing. Just stared the other guy down.

Even I had to admit his stony silence was impressive.

Of course, he kind of reminded me of his dad right now, something he probably wouldn’t like. Or would he? I had no clue.

Chase didn’t answer him. He just motioned me inside, his jaw ticking ever so slightly. When I didn’t move fast enough, he shot me a look with those gorgeous eyes of his, and I jumped slightly. “Um. Yes, I am.” I swallowed hard and inched past him, making sure I didn’t brush against his bare chest in the process.

Chase slammed the door behind me. I blinked across the inky blackness of the room, my heart hammering away in my ears. He’d been sitting here in the dark this early in the night? Had he been napping before hitting the books?

“Do you have something against lights?” I asked, forcing a little laugh at the end.

Dead silence met my joke. In all fairness, it was a pretty lame attempt. For a second I wondered if he was even in the room with me, but I heard him breathe. I turned my head, trying to figure out where he was. To my left, maybe.

“Okay. No lights, then. That’s fine. It’s cool. I’m not scared of the dark.” I paused. “Were you taking a power nap? I could use one. I got an hour of sleep last night.”

I sensed him there, right next to me. He wasn’t touching me, but I swore he was thinking about it or something.

That makes no sense, Taylor.

I shivered, anxious and excited, all at the same time. “I don’t know if you remember me, but I’m—”

Without warning, Chase moved close enough for me to feel his heat. I backed against the wall until I couldn’t back up anymore. It wasn’t that he scared me. He didn’t. I just...

I just backed up, okay?

“You’re Taylor Selmer. Of course, I remember you. Why are you in my room?”

Jen McLaughlin is the New York Times and USA TODAY bestselling author of sexy books with Penguin Random House. Under her pen name, Diane Alberts, she is also a USA TODAY bestselling author of Contemporary Romance with Entangled Publishing. Her first release as Jen McLaughlin, Out of Line, hit the New York Times, USA TODAY and Wall Street Journal lists. She was mentioned in Forbes alongside E. L. James as one of the breakout independent authors to dominate the bestselling lists. She is represented by Louise Fury at The Bent Agency.

Though she lives in the mountains, she really wishes she was surrounded by a hot, sunny beach with crystal-clear water. She lives in Northeast Pennsylvania with her four kids, a husband, a schnauzer mutt, and three cats. Her goal is to write so many well-crafted romance books that even a non-romance reader will know her name.