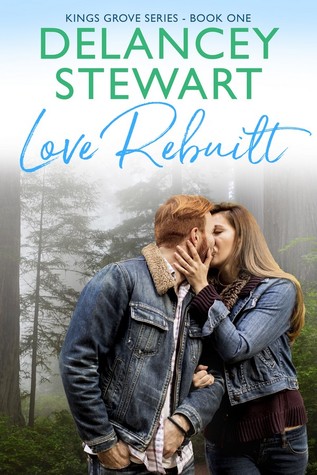 Connor Charles has a dark reputation in the small town of Kings Grove. A reclusive and successful horror writer, he keeps to himself, but that doesn't stop the rumor mill in town. Connor's keeping some dark secrets, but they aren't the ones everybody believes. Maddie Turner's marriage ended in "I'm-bringing-in-a-younger-model" disaster, and when she finds herself living in a trailer, working in a diner, and stuck in the isolated mountain town where she grew up, she's not sure how to turn it all around. When she meets Connor Charles, sparks fly, but is a mountain romance what either of them really needs? For fans of Tracy Brogan and RayAnne Thayne, Delancey Stewart’s latest is filled with memorable characters, humor, family, and the happily ever afters we all deserve.Love Rebuilt is the award-winning first book in Stewart’s new Kings Grove series – a small town romance series set beneath the Giant Sequoias in California.

In Love Rebuilt  (Kings Grove #1) by Delancey Stewart, author Connor Charles pens some very dark stories, so it makes him a target for rumors in the small town of Kings Grove. However, Maddie Turner isn't inclined to believe half of them, even though it's hard not to with everything that is said about him. But as Maddie and Connor grow closer, they both find their trust in each other broken. Will the pair be able to overcome the obstacles keeping them apart, or will they lose their shot at happy ever after?

This is the third book I've read by Ms. Stewart and I've got to say that it is a wonderful start to this series for her. Really, the characters were very entertaining; and the dialogue compelling and drew me in right from the beginning because the heroine's ex-husband is such a nuisance and she needs to find a way to stand up to him. Will she finally find a way to get her ex out of her life for good? However, it was from the moment the hero and heroine met that had me liking the hero immediately, as he's considerate of the heroine and her wishes when it comes to what he's meeting her for.

Both the main characters have interesting back stories, and I loved how the heroine gives the hero a chance, despite all the rumors that are circling about him and should be making her run in the opposite direction. Furthermore, I really liked the obstacles these two face to be together including the secret the hero is keeping about their shared past and the betrayal the hero believes the heroine committed. Will the hero realize the truth before it's too late? As for the heroine, she's strong, brave and I liked that she didn't give in to what her ex-husband wanted her to do because she was hurting for money. I also liked that she made things right with her brother, especially because he needed her with the tough time he goes through that made me cry. While the hero, I loved how he handled everything he goes through, especially when it comes to the investigation he's under. I also liked that he gave the heroine a chance because in some ways she's his salvation; someone that wants him for him and not someone out to use him.

Overall, Ms. Stewart has delivered a really good read in this book where the chemistry between this couple was fantastic and the ending had me loving what the hero and heroine were going to do to finally get the heroine what she deserves out of her divorce. However, it was the final chapter that wrapped this story up nicely because of the hero's surprise for the heroine. I would recommend Love Rebuilt by Delancey Stewart, if you enjoy the mysterious strangers trope or books by authors Iris Morland, Marie Force, Bella Andre and Donna Kauffman.