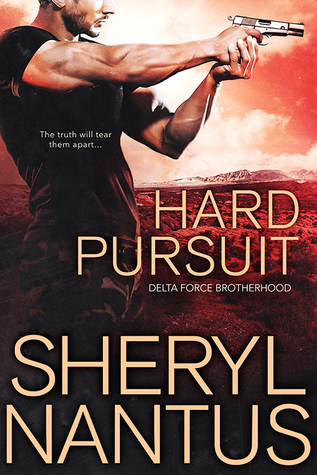 Trey Pierce has spent years helping the Brotherhood, using his computer skills to dig out secrets and help deliver justice. But there's one mission he's yet to finish–– finding out who killed his best friend. A chance meeting with Ally Sheldon gives him a new lead, one that comes with some baggage. Executive Ally Sheldon has to find her wayward brother if she wants to save her company. Pretending like nothing is wrong is getting to her. But when the sexy Trey is assigned to her to help her case, focusing on what's most important is difficult.


Never in his life has Trey been more attracted to a woman, but she’s hiding something. And that something may just destroy them.

In Hard Pursuit (Delta Force Brotherhood #3) by Sheryl Nantus, when Ally Sheldon's brother goes missing, she'll do anything to find him, even if it means going to the Brotherhood for help. However, she never expected to meet Trey Pierce, a man that could change her life and uncover a dark secret to do with her family; a secret that could destroy everything they've worked so hard for since justice deserves to be served. Will Ally walk away from the only family she's ever known to have a chance at happy ever after with Trey, or will their past demons keep them apart?

Having really enjoyed the first two stories of this series, I couldn't wait for this next instalment, and even though I had trouble warming up to the heroine in the beginning, Ms. Nantus has delivered another fantastic read for this series. The way this story started had me liking the hero immediately, as he's a computer genius that will use any means necessary to discover information that he's been searching for during the past few years. Will he find the information he's looking forward? Will it lead him to getting justice for what happened? However, it was from the moment the hero and heroine met where things really took off, as the heroine could be just the lead he needs.

As for the dialogue, it was intense due to the main characters back stories; their shared past in terms of what happened to him that leads back to her family; and I loved the obstacles these two had to overcome because family is important to the heroine and I wanted to know whether she'd finally see the truth and walk away from them for the hero or whether her loyalty to family was more than her love for Trey. Furthermore, in the beginning, I thought the heroine was weak for defending her brother when it seems he continues to be at fault and everyone lets him get away with it. When was she going to finally say enough is enough and do something about it? However, as this story progressed the heroine did change my mind, as she begins to realize how much her brother needs help and the only way to do that is to start standing up for herself instead of defending his reckless actions all the time. Will she discover the information she needs to finally help him?

While the hero, he's been through a lot and I could understand why he was so obsessed with finding the person responsible for what happened to him and a friend years ago because he deserves justice. However, I couldn't help but sympathize with him either, because he doesn't want Ally to be hurt by his secret, but at the same time he needs to know to get closure from his past. Yet, what I liked most of all about the hero is how resilient he is when it comes to everything he faces, especially the moment where he faces off against Ally's brother; a moment where things could change for his and Ally's growing relationship. Will the heroine finally wake up and see how stupid it is of her to keep defending her brother when there's no remorse in him for things that he's done?

Overall, Ms. Nantus has delivered a wonderful and very engaging read in this book where the chemistry between this couple is intense; the romance heats up the pages and does this couple's chemistry justice; and the ending had me loving the heroine's bravery and the fact that she was finally willing to do the right thing when it came to Trey and helping him get what he wanted most -- justice for his friend. I also liked the decision Trey made in the end for his future with Ally. I would recommend Hard Pursuit by Sheryl Nantus, if you enjoy the enemy to lovers trope or books by authors Pamela Clare, Katie Reus, Misty Evans and Kaylea Cross.