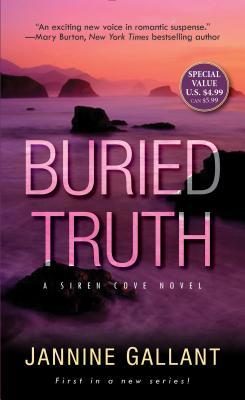 Visit Siren Cove, Oregon, for gorgeous beaches, miles of hiking, delightful small-town shops--and a dark side none of its residents could have possibly imagined . . .

Leah Grayson has lived in Siren Cove all her life. It's where she buried a time capsule with her fifth-grade class. Where she spent an unforgettable night on the beach with her first love. Where she married then divorced her rotten ex.But there's something ugly going on in her pretty little town. When Leah organizes a reunion for her fifth-grade classmates to open their time capsule, they discover a roll of film no one remembers saving. Afterward, strange incidents begin happening. Warnings. Accidents. Random acts of vandalism.Luckily, her first love is back in town, too. Ryan Alexander has made it big with a wildly popular social media startup, but he's still the same sweet, cynical man she fell for all those years ago. And the chemistry they felt as teenagers is as strong as ever.A nostalgic fling turns deadly when someone is convinced Leah has the key to secrets long buried. With no way to know whom they can trust, Leah and Ryan will have to seek out the answers themselves . . .

In Buried Truth (Siren Cove #1) by Jannine Gallant, Leah Grayson is determined to move on with her life after her divorce and opening the time capsule she and her fifth-grade classmates buried years ago is on her agenda. However, soon after Leah finds herself targeted by a madman and strange incidents she thought were just pranks turn out to be something more sinister. Luckily, she has Ryan Alexander -- the first man she ever loved on her side -- as they try to unravel why someone is out to get her. Will the pair be able to overcome the danger they face, or will they lose their second chance at happy ever after because someone wants secrets long buried to stay that way?

Although this story started off a little slow, I found that once the hero and heroine came face-to-face for the first time and then when they finally get the time-capsule unburied that this story really takes off, and takes readers on an exciting and captivating story encompassing a dark secret that needs to finally come out in order to see people pay for their crimes. Yet, what I liked most of all about this story is that I couldn't figure out who was a bad guy and who wasn't.

As for the dialogue, it was intense due to the main characters back stories, their past history that had them going their separate ways; and the incidents that put the heroine's life at risk. Will she be able to escape the danger? Will Ryan be able to protect her? Moreover, the heroine seems a little naïve when it comes to who she believes is causing the incidents. However, in saying that, she's also resilient and courageous with everything she goes through. I also liked how determined she was to discover the truth of what had been going on over the years, despite the danger it puts her in. Luckily, she has Ryan on her side. While the hero, he's worked hard to get to where he is in his life and I liked that he was determined to make things right between him and Leah because they're good together. I also liked how protective Ryan was of the heroine until they figured out what was going on and who was after her. Will they discover the truth before it's too late?

Overall, Ms. Gallant has delivered a really good read in this first book of her Siren Cove series where the chemistry between this couple is still as strong as it was in the past; the romance was delightful and had me cheering for this couple's happy ever after; and the ending had me on the edge-of-my-seat because of the dangerous situation the hero and heroine find themselves in. Furthermore, I loved how things worked out for the best between Ryan and Leah because after everything they go through and have been through they both deserve happiness. I would recommend Buried Truth by Jannine Gallant, if you enjoy romantic suspense, the second chance romance, the friends to lovers trope, or books by authors Rita Herron, Pamela Clare, Cynthia Eden and Kat Martin.