REVIEW: THE MAN I WANT TO BE by CHRISTINA ELLE 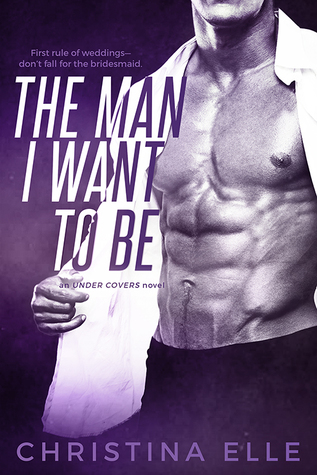 The Man I Want to Be
Under Covers #3
By Christina Elle
Releasing February 26th, 2018
Entangled Publishing

DEA agent Bryan Tyke hates weddings. He hates them even more when he's forced to travel to a hot as hell beach resort to watch his best friends say I do, while acting happy about it. He isn't happy. If those two want to buy into happily ever after, good for them. That isn't in the cards for Tyke. It hasn't been since he joined the army years ago and lost everything. That is, until the woman he’s never forgotten shows up as a bridesmaid and puts herself into immediate danger.Kenna McCord has bigger issues than running into the gruff, sexy guy who broke her heart. Someone is stealing from wedding guests, including her late mother's sapphire ring, and Kenna needs to find the thief ASAP. Reluctantly, she agrees to let Bryan use his skills and resources to help with the investigation, knowing full well it will lead to nothing but frustration and more broken promises. Unfortunately, there’s still something between them and it can’t be denied…

In The Man I Want to Be (Under Covers #3) by Christina Elle, DEA agent Bryan Tyke never imagined he'd see his ex-fiancé again, especially at a friends wedding. He had his reasons for leaving her,  but he's never gotten over her. So, when something important to her goes missing, Bryan is determined to do everything he can to help her get it back, if only to make things right between them. However, the more they're around each other, the more they each find themselves falling for the other all over again. Will Bryan and Kenna get their second chance at forever after, or will the hero's demons keep them apart?

First off, this story can easily be read as a stand-alone, even though it's the third book of Ms. Elle's Under Covers series and I've got to say that I really enjoyed this story. It had me smiling because of the moment the hero and heroine come face-to-face for the first time in years, as the heroine has every right to do what she does. How could the hero did what he did in the past? However, it was the investigation into what the heroine is missing that had me really enjoying this story, as the heroine is stubborn and isn't about to let the hero do anything without her.

Both the main characters are relatable, likeable and I loved how determined the hero is to make things right between them, even though he knows it's not a good idea to get involved with Kenna again. Since he believes he can't give her what she wants, so it's better to let her go. Will the hero finally be honest with the heroine about the past and why he left? Furthermore, the heroine is sassy, determined to find what the item she is missing, even if she has to get creative to get information; and I liked how much of a challenge she presents for the hero. While the hero, he's been through so much and it's understandable why he's determined to make things right with the heroine because he still feels such guilt about what he did. I also liked the tight bond the hero shares with his friends and that they aren't afraid to offer their advice because they want him to be happy, and clearly, Kenna makes him happy. Yet, what I liked most of all about the hero was discovering things about his past and how his past has shaped him into the man he is. Certainly, he's an honorable man that would do anything to make things right with the woman he hurt years ago.

Overall, Ms. Elle has delivered another really good read for this series where I loved this couple together because of their strong chemistry, which was instantaneous from the moment they come face-to-face; the romance was nicely-detailed and had me cheering for this couple's happy ever after, as it's palpable they still love each other; and the ending had me sympathizing with the hero as he finally opens up to the heroine about the past. Will she understand why he did what he did all those years ago? Will the heroine be able to forgive him? However, in saying that, I absolutely loved how things worked out for this couple and how the epilogue wrapped things up perfectly because the hero and heroine fought for their chance at love, family and happiness and get it. I would recommend The Man I Want to Be by Christina Elle, if you enjoy second chance romances or books by authors Lynn Raye Harris, Susan Stoker, Melissa Foster and Rebecca Zanetti.