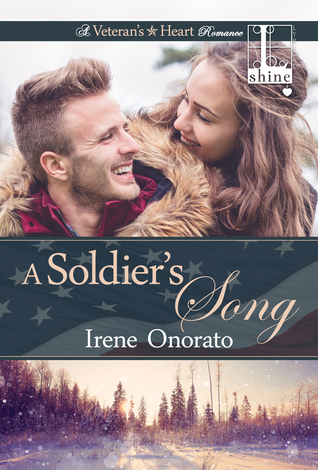 
All Special Forces sergeant Jason Dexter ever wanted was to serve his country—with his father’s blessing. Although the elder Dexter has yet to make his peace with his son’s decision, Jason has no regrets. Still, he has mixed feelings about returning to his upstate New York town. But his perspective changes at a friend’s wedding, where he meets a lovely, gifted musician. Now Jason has a new mission: to get to know Aria Greco better. The daughter of Jason’s commanding officer, Aria dreams of becoming a concert pianist. Meeting the handsome soldier transforms both their lives. But Aria’s ambition, Jason’s unresolved family conflicts, and jealousy over rivals on both sides soon threatens their blossoming relationship. As Jason prepares for a dangerous deployment, will the mounting tensions tear them apart, or is their love—and the faith they share—powerful enough to heal the past and embrace the future?

In A Soldier's Song (A Veteran's Heart #3) by Irene Onorato, Jason Dexter never expected to meet his dream woman at the wedding of a friend. Determined to get to know her better, he does everything he can to spend time with her, even if it means going head-to-head with his commanding officer to prove he can be the man Aria needs. However, life isn't fair and if they can't learn to trust each other, then their relationship will never work. Will Jason and Aria be able to overcome the obstacles that are keeping them apart, or will they lose their chance at happy ever after?

Although this story started off a bit slow and didn't hook me immediately, I really enjoyed it in the end, as the main characters face some tough obstacles to be together including whether they can trust each other, whether the hero can prove he's good enough for his commanding officer's daughter, and whether the hero can come back from his mission in one piece. Will everything work out for the best? However, it was from the moment the hero and heroine came face-to-face for the first time that had me reading quickly, determined to discover what direction this couple's relationship would take since he's a soldier on break for a few days and she's his commanding officer's daughter.

Both the main characters had me enjoying this story due to their back stories and their growing relationship. Moreover, I couldn't help but sympathize with the hero because of his relationship with his father, which is tense because the man is disappointed in him because he became a soldier and didn't follow the path his father wanted for him. I also liked how persistent he was in his pursuit of the heroine, because they have a strong connection and he wants to see where it goes. While the heroine, she's resilient, a little naïve when it comes to trusting someone she knew years ago, and I liked the close relationship she has with her parents because her mom offers her great advice at a time when she needs it.

Overall, Ms. Onorato has delivered a really good read in this book where the chemistry between this couple is strong and gets stronger the more these two interact; the romance was delightful; and the ending had me worried for one of the main characters, but had me liking how everything worked out for the pair because they need each other. I also liked how the hero's family issues were resolved. However, I felt the ending was a bit rushed. Why wasn't there an epilogue? I would recommend A Soldier's Song by Irene Onorato, if you enjoy the mysterious strangers trope, the opposites attract trope, or books by authors JM Madden, Janet Dailey, Nancy Mehl and Susan Stoker.