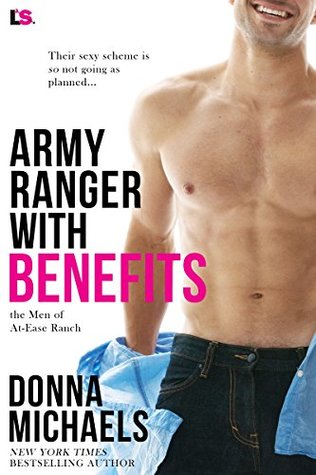 Emma Roberts is done losing her heart to military men who don’t stick around. Desperate to shake up her love life, she launches a plan to get her handsome, dependable crush to finally notice her. And her neighbor’s sexy older brother that just arrived in town is the perfect man for the job.
But there’s a problem. Emma’s ridiculously attracted to her fake boyfriend.
Former Army Ranger Vince Acardi dropped everything to help his stubborn brother after he’s injured in the line of duty. Instead, he somehow gets stuck helping the a mki99at fake-dating her is a hardship, and soon, he’s holding her, kissing her, touching her...
There’s nothing fake about the chemistry between them. But Vince is leaving in two weeks, and Emma refuses to risk her heart on another military man. Worse, the good doctor she’s been after is finally standing up and taking notice.
Each book in the Men of at Ease Ranch series is STANDALONE:
* In a Ranger’s Arms* Her Secret Ranger* The Right Ranger

In Army Ranger with Benefits (The Men of At-Ease Ranch #4) by Donna Michaels, when his brother is injured on a mission, former Army Ranger Vince Acardi rushes to his side to help in his recovery. However, when he meets Emma Roberts, he never imagined he'd be helping her to win the heart of the guy she really wants. Yet, the more time they spend together, the more Vince finds himself doing the one thing he never thought he'd ever do again -- falling in love. Will Vince and Emma be able to overcome the obstacles they face to be together, or will their past demons keep them apart?

What an incredible and very entertaining read Ms. Michaels has delivered in this fourth book of her Men of At-Ease Ranch series where the main characters were enthralling due to their back stories and their growing relationship; the dialogue was compelling and a wonderful combination of intense moments and playful banter that had me laughing at times and sympathizing with both characters at others; and the storyline was fast-paced and drew me in immediately because Vince is loyal and will do anything for family.

As for the main characters, I absolutely loved these two together. Certainly, there was fun to be had, especially the moments where the heroine is determined for them to be where her dream man is hanging out. Let's hear it for bowling alleys and getting a little too tipsy at a bar. Furthermore, the heroine is strong, brave and I liked that she was willing to accept Vince's help, even if it meant being bribed into accepting. I also liked the close friendship she had with her best friend; a woman that's an absolute hoot since she's determined to see Emma happy. While the hero, he's loyal, confident and I liked how far he was willing to go to help the heroine. Why not show the other guy what he's missing out on by flaunting their fake relationship in front of him? I also liked the tight bond he shared with his friends who aren't afraid to give their advice when it comes to the hero's future with Emma. Yet, what I liked most of all are the jokes the hero and his brother play on each other, especially when it comes to making sure his brother isn't left alone.

Overall, Ms. Michaels has delivered a worthwhile read in this book and one not to be missed, especially if you enjoy this series. Moreover, this story was filled with plenty of chemistry between this couple; chemistry that was off-the-charts and had me hoping for the best for this couple while the ending wrapped this story up perfectly because the heroine had the courage to go after what she wanted -- Vince. I would recommend Army Ranger with Benefits by Donna Michaels, if you enjoy the fake relationship trope or books by authors Cora Seton, Sable Hunter, Lynn Raye Harris and Katie Reus.