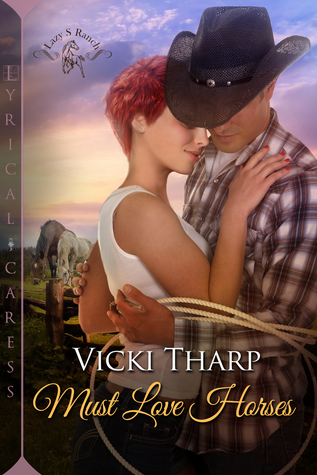 The dust hasn’t settled on one woman’s past, but amid the breathtaking hills and valleys of Wyoming’s high country—and with the encouragement of one special man—her spirit won’t be broken . . .   Sydney Teller is as determined as the wild mustangs she was raised to train. Her reckless parents destroyed their reputation in the business—and hers, by association—yet Sydney knows she can prove herself, if she’s just given a chance. That where the Lazy S Ranch, and sexy Bryan “Boomer” Wilcox comes in . . .   Bryan risked life and limb on his tours in Iraq, and he knows damaged goods all too well when he sees them. Problem is, Sydney looks damn fine in a saddle and she’s got moves that can’t be learned. He doubted her at first, but now he wonders if they can navigate life’s obstacle course together—and indulge their own animal instincts . . .   Sydney can’t deny her attraction to Bryan, yet she’s wary of his demons. But when foul play threatens the ranch, and their futures, Bryan gets a chance to rediscover the hero he’s been all along—and Sydney gets to show she’s got what it takes to tame the wildest impulses—in both man and beast . . .

In Must Love Horses (Lazy S Ranch #2) by Vicki Tharp, Sidney Teller is determined to land the horse training job going at the Lazy S Ranch, but with what her parents did in the past, it might prove harder than she realized. However, proving what she's capable of is part of the plan, and luckily Bryan 'Boomer' Wilcox is willing to take a chance on her. Yet, with danger brewing and the threat to the ranch, Sidney knows she's going to have to trust Boomer, even though that's not an easy thing to do considering his past demons and what he does to cope. Will Sidney and Bryan get their chance at happy ever after, or will the threat to the ranch land these two in trouble that they may not be able to get out of?

This was a very entertaining and thrilling read that I loved from the start, as Sidney is out to prove she's nothing like her parents, if only someone is willing to give her a chance. Can she convince the owners of the Lazy Z Ranch that she's good at what she does? However, it was from the moment the hero and heroine come face-to-face for the first time where things really get interesting, as it seems everyone knows what her parents did and it's hard to make people see that she's different with such a black mark against the family name.

As for the dialogue, it was intense due to the main characters back stories that had me sympathizing with the hero, as he struggles with addiction to numb the wounds of his past; and also had me feeling sorry for the heroine because she can't escape her parents terrible crimes. Will these two be able to help each other heal from the wounds of their pasts? Will the heroine be able to help the hero break free of his addiction? Moreover, the heroine is resilient, courageous and I liked how determined she was to prove that she's not her parents. I also liked that she gave the hero a chance because he needs someone like Sidney in his life. Yet, what I liked most of all about the heroine was how she handled the danger she and the hero face. While the hero, he's gruff, hard-working and I loved how determined he was to protect the heroine when it comes to the danger they face. He's also a good guy and I couldn't help but feel sorry for him when it comes to his addiction. He has a tough fight on his hands if he wants to be free of his addiction and I liked that he was willing to do everything he can to show the heroine that his past demons won't win.

Overall, Ms. Tharp has delivered a really good read in this book where the chemistry between this couple is strong and just keeps getting stronger with every interaction between them; the romance was delightful and had me loving this couple together; and the ending had me worried for the main characters, but had me loving that everything works out for the best for Sidney and Bryan because they need each other. I would recommend Must Love Horses by Vicki Tharp, if you enjoy contemporary romance with a good dose of suspense, the enemy to lovers trope, or books by authors Gail Chianese, Laura Carter, Melinda Di Lorenzo and Codi Gary.