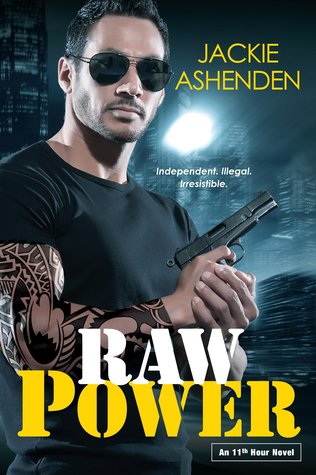 They fought for their country. Now they fight for you. To find the people lost in the shadows, you need the men who live in them. The former soldiers of 11th Hour are unaffiliated, unacknowledged, and definitely illegal. They protect the innocent, destroy the guilty--and capture hearts along the way . . .
Rugged, skilled, and hard-bodied, Jack King's whole life was the Marines until an injury left him discharged from active duty. But he finds a new purpose when he's recruited by a special unit that employs ex-military to do very special jobs. Yet he's not impressed when his first assignment is babysitting the pretty, perfect daughter of a politician--especially when she's far from the angel she appears to be . . .Callie Hawthorne hates politics, and she hates playing the part of a senator's goody two shoes daughter even more. It only gets worse when her father decides she needs a security detail 24/7--and the bodyguard happens to be the most insanely hot guy Callie's ever seen. Still, she's not going to be ordered around just because of some half-assed threat to her father. . . . But when it turns out her dad's no angel either, Jack has to kidnap Callie in order to protect her. And as danger closes in, he'll need all his considerable talents to keep them both alive. The greater challenge will be to keep his hands off her . . .

In Raw Power (11th Hour #1) by Jackie Ashenden, Jack King is struggling with life after his military career came to end because of an injury. Discharged from active duty, he has no idea what to do with himself until the 11th Hour -- former soldiers that are determined to keep on helping people -- come to him and make an offer he doesn't know whether he can refuse, especially since it'll give him purpose for his life instead of drinking it away. However, babysitting a politician's daughter isn't what he had in mind for his first assignment, but it seems he has no choice. Will he be able to keep Callie Hawthorne safe while doing his best to keep his hands off her, or will discovering the person responsible for the threats to her life make them both more of a target?

This was such an intriguing and thrilling tale, of which I loved how it started because the hero needs a purpose for his life instead of continuing to be stuck in the same rut he's been in since he was discharged from active duty. Will the 11th Hour be just what he needs to get his life back on track? However, it was from the moment the hero and heroine come face-to-face for the first time that had me smiling, as the heroine proves quite the challenge for the hero. Will he have to use the strong-arm tactics he threatens in order to get her to understand she's a target?

As for the dialogue, it was intense due to the main characters back stories that had me sympathizing with both of them, as the hero's injury forced him to leave the career he loved and he doesn't know what to do with himself anymore while the heroine wants freedom from her father and I could understand why she pushes the boundaries of what she should and shouldn't be doing because her dad is an arrogant jerk that expects her daughter to do what she's told when she's told. Will she ever fall into line with her father's plans?

With the main characters, I thought both were fantastic, as the heroine provides quite the challenge for the hero. Will she eventually give him a chance? Will she finally realize how serious the threat is to her life? Will the hero discover who is threatening the heroine? And if he does, what lengths will he go to in order to keep her safe? Moreover, the heroine is resilient, feisty, and courageous in standing up for herself because she doesn't need anyone. Yet, in saying that, I liked how she took a chance on the hero once he proves how determined he is to protect her. While the hero, he's been through tough times and I liked how working with the 11th Hour and protecting Callie gives him purpose for his life, which is something he needs. I also liked how protective the hero was of Callie, especially once they realize where the threat is coming from. No way was she going to continue to let someone try to have control over her life.

Overall, Ms. Ashenden has delivered a read that had me hooked from beginning to end because of the strong chemistry between this couple that spilled over onto the pages in really steamy sex scenes that showed how much Jack likes control; and the ending wrapped this story up wonderfully because the heroine finally has the chance to help the hero and herself. No longer does she need to worry about the person responsible for the threats to her life. I would recommend Raw Power by Jackie Ashenden, if you enjoy the sexy protector trope, the opposites attract trope, or books by authors Katee Robert, Katie Reus, Sharon Hamilton and Lindsay McKenna.