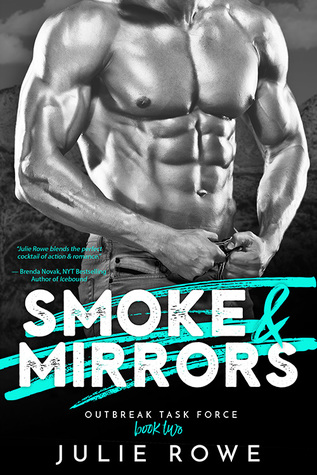 Someone scratched a death threat in the paint of CDC nurse Kini Kerek’s rental car. She’s in Utah researching Hantavirus, but damaging rumors about the CDC have left residents suspicious and uncooperative. Thank goodness for hot, sexy, former soldier Smoke, a man of few words, who’s assigned to protect and help her navigate the isolated desert town as she races to identify a deadly virus before more people die. Memories from the combat zone leave ex-Special Forces soldier Lyle Smoke in a constant state of battle readiness, and he finds no solace, even after returning home to Small Blind. When he meets Kini Kerek, he discovers his heart isn’t entirely dead. But, that might not last long, because this outbreak is no mistake, and he’ll need to use all his survival skills gleaned from the military and his Native American upbringing to keep him and the beautiful, but secretive, Kini alive.

In Smoke and Mirrors (Outbreak Task Force #2) by Julie Rowe, CDC Nurse Kini Kerek has her work cut out for her, especially when she finds herself being targeted and rumors are flying around town about what she's really there for. Luckily though, she has former Special Forces soldier Lyle Smoke to help her out and protect her from any other threats that she may face while continuing her research into Hantavirus. However, as the danger closes in, will Lyle be able to keep Kini safe, or will they lose their chance at happy ever after?

This is the first book I've read by this author and I've got to say that I've been missing out on some fantastic and compelling reading if the rest of Ms. Rowe's books are as good as this one. Really, this book had everything I love in a romantic suspense including a perfect combination of suspense and romance; highly entertaining dialogue that drew me in from the very beginning and just kept getting better the further Kini and Smoke got into their investigation; and the fast-paced storyline had me intrigued and determined to discover how far the bad guys were willing to go to stop Kini from continuing her research. However, it was from the moment the hero and heroine came face-to-face for the first time that had me smiling because Kini definitely knows how to make a good first impression, especially when it puts her in the hero's personal space.

Both the main characters are relatable, likeable and I loved their back stories because the hero has been through so much as a special forces soldier and the harshness of people that believe he's the bad guy because of things that happened in his past that he feels such guilt about. Will he ever realize that what happened in this past wasn't his fault? Moreover, the hero is confident in his skills in protecting the heroine; doesn't speak more words than he has to, which is quite amusing; and I loved how the hero won the heroine over. While the heroine, she's resilient, courageous and I liked that she didn't scare easily, even though the incidents become more and more harrowing. I also liked how good the heroine was at her job and that she would do anything to try and help people in need, even though all hope seems lost.

Overall, Ms. Rowe has delivered a thrilling and well-written read in this book where the chemistry between this couple was intense; the romance delightful; and the ending had me worried for the main characters, but had me liking how far the hero is willing to go to protect the heroine, even if it means breaking a promise that he made to Kini. Yet, in saying that, I liked how things worked out for this couple, as they're really good together and shouldn't let anything keep them apart. I would recommend Smoke and Mirrors by Julie Rowe, if you enjoy romantic suspense or books by authors Christina Elle, ST Young, Kaylea Cross and Katie Reus.